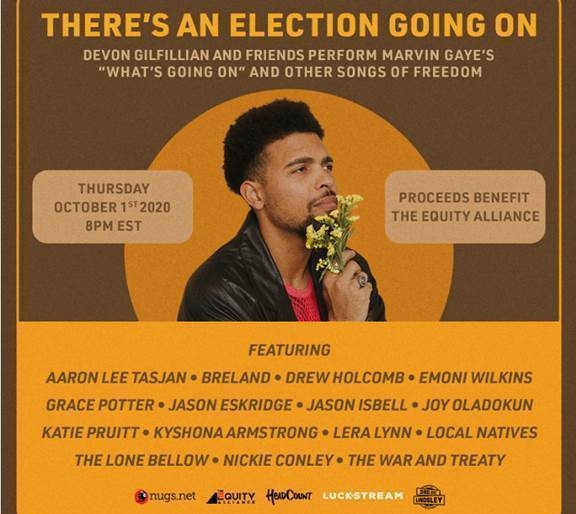 Devon Gilfillian teams up with Jason Isbell, Katie Pruitt, The Lone Bellow, and more for There’s An Election Going On benefit concert

Yesterday was Voter Registration Day, and many artists took to social media to encourage others to be prepared for the upcoming presidential election. Nashville singer-songwriter and recent XPNFest Livestream performer Devon Gilfillian announced a benefit concert called There’s An Election Going On that will be live-streamed on October 1.

The concert will feature Gilfillian and his 10-piece band covering Marvin Gaye’s 1971 record What’s Going On in its entirety, along with other artists contributing performances of songs of freedom or protest. Among those artists are Katie Pruitt, Grace Potter, Jason Isbell, The War and Treaty, The Lone Bellow, and more. Gilfillian describes via Instagram the event’s music as “songs that inspire us to love each other and fight for freedom.”

There’s An Election Going On is partnering with Headcount, an organization that encourages civic engagement at entertainment events, to help register voters during the broadcast. All proceeds will go towards The Equity Alliance, a Tennessee non-profit that fights voter suppression and educates those in low-income communities about the voting process.

The event will be broadcasted on Thursday, October 1 at 8 p.m. ET. Check out the full line up below and previous XPN performances from featured artists below.