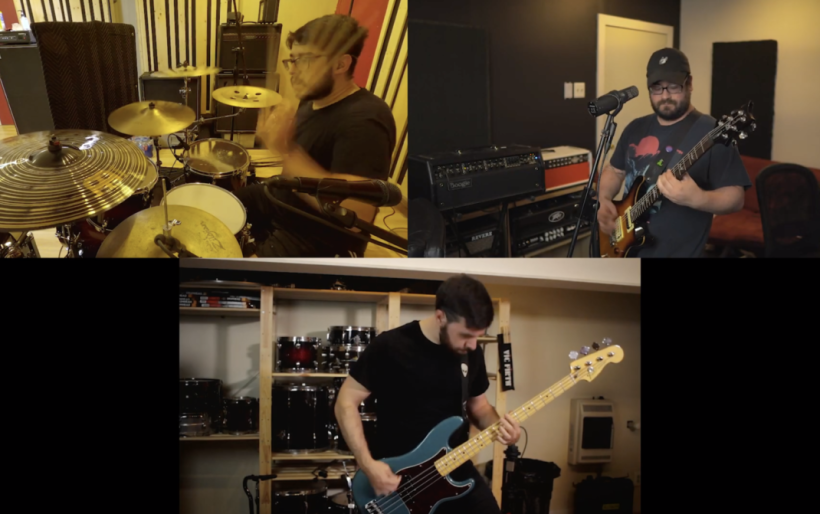 The American Standard | still from video

Delran, New Jersey power trio The American Standard are one of innumerable regional and national independent bands who spent 2019 working on their latest and greatest collection of songs, only to have it touch down during the disarray of a global pandemic.

The band is comprised of guitarist and vocalist Greg Nottis, bassist Sean Fisher, and drummer A.J. Viana, and their full-length debut Stations was recorded Viana’s studio just across the Delaware River in Bucks County and released on Bandcamp on May 29th of this year.

Some moments burn brighter than others — the violent post-breakup scorn on “That’s What The Money’s For” tastes particularly toxic — but the moments where this band hits, it hits in a big way. Take a listen to “Fall Right Through,” a sublime post-emo anthem in the vein of Jimmy Eat World where Nottis hope of being the catalyst for healing (“I wanna be the thing that puts you in a better mood.”) Later in the album, “Prove Them Wrong” slams and grooves to a funky downbeat while Nottis sings in a Fall Out Boy cadence about not letting anyone else’s perceptions control your destiny. The Parks and Rec-referencing “Jean Ralphio’s Million Dollar Idea” shows the band’s irreverent sense of humor, even when they’re singing about neuroses, while the graceful opener “For Days” splits the difference between Death Cab and Modest Mouse as a solitary, resonant guitar line is Nottis’ only backing as he sings “Oh oh, we all float away, but where do we float to?”

To celebrate the new album, and to just play live again, The American Standard convened on Viana’s studio once again for a livestream performance that broadcast last Wednesday, October 7th. It’s a punchy three-song set that opens with the first song on their first EP (“I’m Gonna Get You Timmy McNulty”) and from there proceeds into two of those Stations highlights, “Fall Right Through” and “Prove Them Wong.”

“2020 has been suuuper rough for everyone,” the band writes on YouTube, “and we really missed ya, so we figured we’d stop waiting around and we’d bring the live music to you guys for a chance.” Watch The American Standard live in studio below, and listen to Stations on Bandcamp.