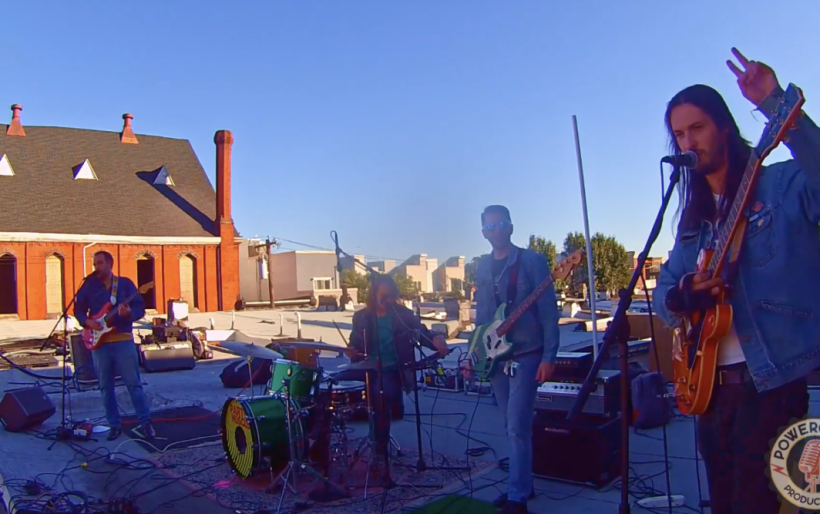 Philly rockers Party Muscles released a punchy, eight-song project called I N T E R N a L a F F a I R S this summer, and with no way of throwing a proper album release blowout, they brought the party to the people.

On the afternoon of October 17th, the band played a socially-distanced live set from the rooftop of South Philly venue The Pharmacy, delivering Strokes-y rock and roll swagger and impeccable guitar-vocal interplay for a small group of fans gathered below.

The cool groove of “Citywalking” and the bubbling “Look In The Mirror” are highlights in the concert video captured by Power Cycle Productions, and almost all of I N T E R N a L a F F a I R S is performed, with the exception of the atmospheric album-closer “Some Things Never Change.”

“It’s pretty short, huh?” singer-guitarist Colin McCarry asks the crowd of the record. “If you have 20 minutes, give it a listen.” The band also dips into its back catalog to round out the set, beginning with 2018’s “Pocari Sweat,” which they tell the audience is two clicks away from cracking 100 views on YouTube. (Either they were being ironic or they drummed up a lot of viewers from the set, since the official video is now over five times that.)

The full concert is streaming at Power Cycle Productions’ Facebook page and you can watch it here. Check out I N T E R N a L a FF a I R Sover at Spotify.

Up on this roof ready to rip a gig at 3PM come through.