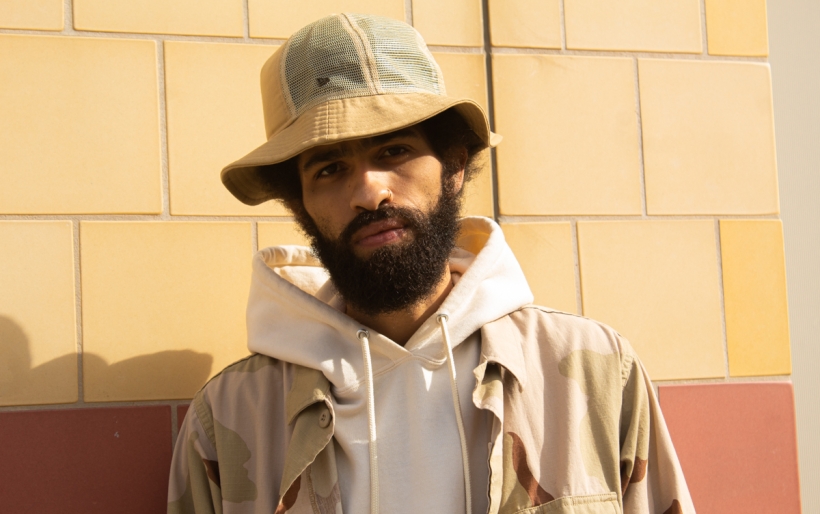 lojii is not your typical Philly rapper. Yeah, he’s split his childhood here with his father, and currently resides within city limits, but he is not a “Philly rapper”. Not that there’s one particular kind of sound or trait that make someone a “Philly rapper”, but some of his most formative and influential years, musically speaking, were spent elsewhere. His sound feels like elsewhere.

After finishing high school, lojii applied for the music program at Purchase College in Harrison, New York. After being put on the waiting list for the audio engineering track, lojii decided to apply to the school’s sociology programm where he ended up being accepted. While in school, he still was able to take a few music classes and build relationships with students who were able to go down a more musical path while enrolled at Purchase – though he ended up still learning how to engineer.

“It was a cool school,” lojii recalls. “Since it was a public school it was a mix of people from elite families all the way down to like the hood people, that were there on an equal opportunity with discounted tuition. I was in the mix with a bunch of creative people, so you know that definitely kept me on my music path.”

After graduating and coming back to Philly, lojii ended up with an opportunity to make a name for himself on the West Coast. After dropping one of his first projects in 2012, a friend featured him on a few songs then later asked him to perform while on the DJ circuit out Los Angeles. The rest is more or less history. lojii packed his bags and dipped out to L.A. for four years.

“I was giving it that East Coast flavor to more of this West Cast kind of production,” says lojii. To “East coast people, my style might be a little diverse, but to West Coast people, I just sound like an East Coast nigga. Like ‘you raw, I like that.’”

To get more at his sound, lojii is less flashy and more mellow than a lot of his 215 counterparts. He can definitely spit, but much of his music is backed to chill, lo-fi beats that are better suited for a chill session than a freestyle cypher. It’s a refreshing sound, but not something that screams Philadelphia.

For a while, lojii’s process consisted of making songs and performing them live to see if they were even worth recording. He ended up gaining notoriety after one of his songs, “No Ebola,” went viral on Soundcloud. Shortly after, lojii reconnected with Swarvy, who he originally met in Philly, to record a few songs. Those sessions ended up turning into the 2017 release, Due Rent.

“We had met in Philly, like briefly brushed shoulders, but we were both living in LA and ended up getting closer and then sessioning up. I was short on my rent that month and then that turned into the whole Due Rent project,” says lojii. “Since the Due Rent project I just kind of hit the ground running. It’s just been like this kind of organic process.”

Since the 2017 collaboration with Swarvy, lojii has released two projects including lo&behold which was released at the top of 2020. The 16-track album at first glance may seem like it may be long-winded, but most of the songs are under two minutes. Although short, each track is a beautiful, complete thought. lojii’s unhurried flow glides across the soft R&B style production with ease. On songs like “Trippin (i like it),” lojii effortlessly jumps between rapping and singing. It’s a sweet and playful song about romance, lust, and aspirations of greatness — a love that is unpretentious, similar to the vibe of the song overall.

With more than 729,000 plays on Spotify, “longwayhome” is the stand out track on lo&behold. It features distorted keys and metronomic snares and contemplative lyrics reflecting on failed relationships, encounters with the police, and internal demons. On this lojii speaks the sort of unsparkly and mundane things that make life harder than it should be, though you can still hear a resolve to live a better life.

In 2019 lojii was going through a grieving period after the passing of some loved ones including family and friends as well has one of his hip-hop icons, Nipsey Hussle. In order work through the grief and loss, he began to focus his energy on production.

“I was kind of grieving through this in all different types of ways: smoking a lot of weed and making a lot of instrumental music. I really ain’t feel like rapping,” says lojii. “I started making all these loops, just trying to process my emotions and then it pretty much turned into all the production for lo&behold.”

After having the musical aspect more-or-less fleshed out, lojii found that he was ready to get his feelings out and put some words to music. At this moment, his urge to let out his emotions was at full capacity. Most of the songs on the project were freestyled or recorded as he went along.

“That tape was real reflective and meditative,” says lojii. “It was things I was dwelling on and moments I was appreciating and things I was looking at within myself that year.”

Despite previous success and notoriety, lojii decided on a quiet release of lo&behold. He simply tweeted that he’d be releasing a project on his birthday that was a week away. The simplistic approach to promotion works for lojii. His fans know that when it drops something it’s going to be good.

lojii initially thought that the project would fade into obscurity on Bandcamp, but in reality, once the project dropped, he got offers for vinyl pressing and distribution deals. According to lojii, that experience made him become his own musical entity. He facilitated his own deals, and pulled together merch on his own.

“It used to be that you get approached by some little indie label and they cover all that, and you just got to make sure your contract is something you can at least get down with. That’s your main concern,” says lojii. “But when you out here by yourself, you got to worry about all the little puzzle pieces yourself and it can be overwhelming. But to me it’s, it’s invigorating. I’m hungry to do more and drop more music under my own entity and own all my masters and figure out how to make it work myself.”

lojii’s sound is quite refreshing. With jazz and soul influences and a natural talent for riding a beat, great things are expected from the artist. Someone with so little pretense and such skill and a strong focus on the music is bound to create quality work. Whatever’s next for lojii is only going to be better than what he’s already achieved.