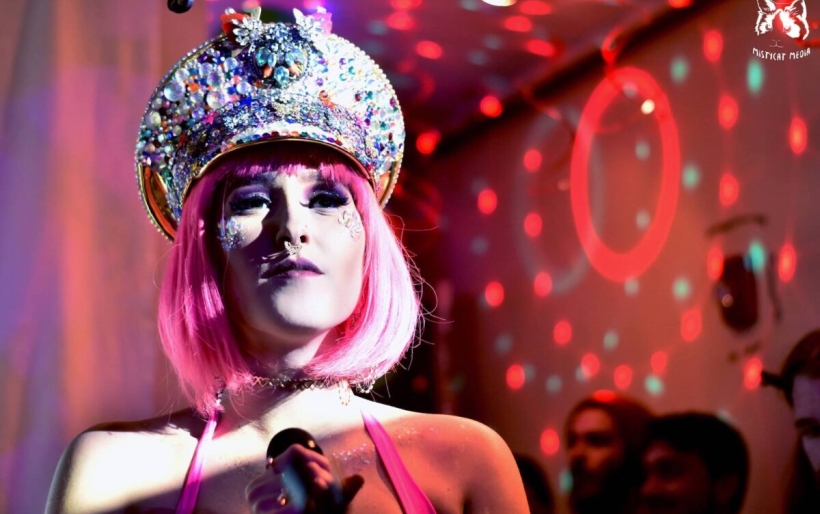 What happens when the tethers that tie us to a place are all at once and indefinitely cut? For three artists deeply rooted in Philadelphia’s music community, the challenges of the pandemic present new possibilities in the absence of the work that grounded them in this place.

Mariah Del Rio quarantined alone. This was a major change for the vocalist who’d spent the past three years spinning herself into the fabric of Philadelphia’s arts scene. A typical week: gigging at the Grape Room or Bourbon & Branch with her songwriting partner Logan Roth, dancing to the bands she loved at FringeArts’ La Peg, visiting friends’ studios cluttered with found objects that would make their way into a work of performance art. You could find her in the pulsing crowd at a Global Village jam, afloat with 300 strangers who came to feel like family. You could find her at The Boom Room, shimmering after a stop at the glitter bar during The Philly Funhouse, an event she hosted to bring artists and audiences together. The songs she wrote were shaped by the energy of these places. A Utah native, she found freedom in Philly to experiment. “Philly is expansive,” Del Rio says. “When I’m here, my art is limitless.”

After two months of solitude, without work to sustain her, she moved home. By summer in Salt Lake City, venues were reopening, and she could get gigs with a local circus company or be cast in a musical. On weeknights at Lake Effect, a restaurant where her friends perform, she sits in the corner behind her N-95, keeping her distance from the crowd. Inside, she’s glowing again with the energy of live performance, but she holds it privately, as a child cups a firefly.

Time in her hometown offers an opportunity to turn inward that wasn’t possible in the luminous nights of her Philly life. In Salt Lake, echoes of her childhood become audible. While she’s home, she hopes to write about some of the pain of her early life that she didn’t make time to explore back east. Now, there’s time. “The pressure to create is gone because we don’t know how long we’re going to be in this state,” she says. Though the rise of digital performance opens doors to stay connected with fans from afar, she’s conserving her energy for introspection.“I want to go within, and not produce so much,” Del Rio says. “I want to step away from the audience and just focus on making the art.”

Sometimes it takes a clean break from our productive lives and the cities in which we thrive in order to access something quiet and true. When Mariah Del Rio returns to Philadelphia, which she intends to do, perhaps her artistry will be even more expansive.

Sonni Shine had been performing in Philly for thirteen years, writing songs she wouldn’t have written in any other city. Her inspiration was sensory—the way the shift in wind sighs a new energy as you cross the Schuylkill, the way litter blankets the streets on a breezy trash day, the way the lights blur when you squint driving up Broad at dusk. Details of place animated the songs—animated whole crowds that would gather and move to the songs. Whether for her reggae/funk band The Underwater Sounds or for Reconcile, her solo LP from 2018, her work was uniquely Philly.

But after she’d written and toured Reconcile, something shifted. “I felt like I said what I had to say, with regards to being inspired by the landscape,” she says. “And I always felt that travel renewed creativity.” So she and her partner, also a Philly musician, began to plot an adventure.

In March, a deluge of emails came from venues and presenters cancelling, one by one, every show. Collaborators called, putting off new projects. Studios shuttered. “The music industry is going to be different for a really long time,” she and her partner thought. “When the dust settles and we can play out again, where do we want to be?” In late summer, they set out for Hawaii, where they’ve just arrived to volunteer on a farm on the Big Island.

“In Philly, there’s an urge, there’s a feeling of gotta keep it moving. You see so many people hustling and you get swept up in it. When that’s out of the picture,” she wonders, “what it will be like to create?” Without the street noise and club scene that fueled her creativity, Sonni, like Mariah, is looking inward, to stores of private thoughts and interior energy she’s never fully explored. This is a practice we can all imitate, for all of us have been uprooted, to some degree, from the places where we live. Digital engagement with our friends, colleagues, and neighborhood venues causes us to hover, never quite landing in the place where we live. We may find that the buzz and chatter that inspired us before has gone quiet. In the quiet, what will we hear?

Martha Stuckey loved to get loud. Perhaps better known as Red 40, frontwoman of disco-funk sensation Red 40 & the Last Groovement, everything about this songstress, from her capacious range to her flaming red wig, cherry lips, and glitter hotpants, roared. This character wouldn’t have come to be in another city. “There’s a certain aggression that you have to find within yourself when you live in Philly,” Stuckey says. She points to Philly sports, the Italian Market’s old-world masculinity, and the strange male pageantry of the Mummers as emblems of the city’s machismo from which she needed to learn to protect herself. Red 40 was the feminine response to the city’s machismo: In five-inch sparkle shoes, she was commanding, sexy, uncensored. In the mythology of a Red 40 performance, it was bravada that took center stage, while men kept the beat in the stage’s shadows, disrobed down to ladies lingerie. “Red 40 is a saltier version of me, a version that has to be more on the offense. In a way, Philadelphia gave me permission to explore that side of myself.”

She was raised in Minnesota, in a culture of modesty. In Philly she encountered an entirely different ethos. She studied at the Pig Iron School, which gave her the tools to be audacious, to imagine and produce her own performances. She developed a new mantra: “Don’t wait for someone else to call you and say, You’re an artist now. Just do the thing.” She thinks of this grittiness as a trademark of Philadelphia music. “It allowed me to expand as a person, as a performer, in my voice, and to be unapologetic about it. Gritty and unapologetic—these are the curse and the blessing of Philadelphia,” she reflects. At heart though, she says, “I’m a very sensitive person. Philly is a hard city to be sensitive in.” So she didn’t expect to stay here forever. She imagined, eventually, she might return home.

“And then everything shut down. I didn’t have to be anywhere in Philly anytime soon. If I was looking for an opportunity to move back, here was my permission.”

Now, in an apartment in Minneapolis, she’s digging up folk songs and ballads she wrote in Philly but hid away, feeling then that they were too down-tempo, too introspective to share on stage. “I’m being given permission to slow down and explore these songs more deeply,” she says. One is called “Childhood Home.” Another, “Long Line of Heart Shape Faced Women,” is about the women in her ancestry. “There’s a domestic, familial exploration in this work that flows out of the fact that I spent time this summer in my childhood home. Any art-making is an effort to order the chaos or to shine a light on the futility of trying to order chaos. The chaos that I’m now grappling with is that of my family”—a fitting exploration for a year that’s drawn all of us closer to home.

Stuckey performed these songs via livestream in October. The Stepsister Cities Show, born of that signature just do the thing moxie and a desire to connect the two cities she’s called home, is a monthly virtual performance by Martha Stuckey featuring sets by one Minneapolis and one Philadelphia musician. She doesn’t expect a livestream to rock you the way a Red 40 show would, but she wonders whether this platform might offer audiences a different invitation: “Maybe a deeper listening is possible, one that demands more of you. Maybe you’re really listening to the words, engaging with the person, engaging with the lyrics or the textures of the melodies.” She hopes deep listening might allow her audience to move slowly, to let down their defenses, and to see themselves more clearly.

It’s an invitation to all of us, even those who stay. For these artists, it took a departure from Philly’s shimmer, hustle, and grit to slow down and tend to their inner lives. Is it possible to cultivate habits of mind that allow those who remain in Philly to discover a welcome kind of quiet? As the cold pushes us indoors, if we receive solitude and vulnerability as a gift, maybe we can stoke new creativity to warm us until spring.