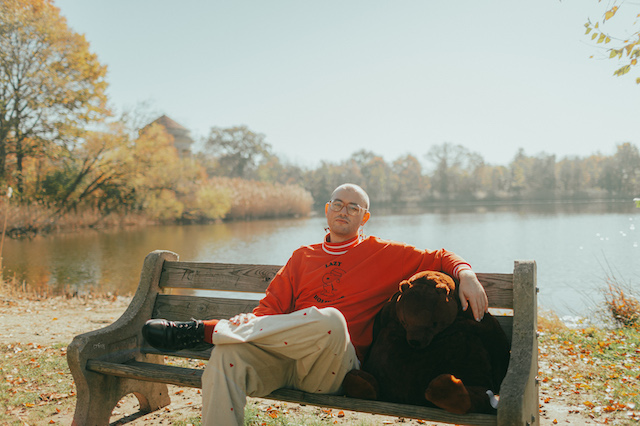 Pastel Williams | photo by Ashley Gellman | courtesy of the artist

Whether on its own or with its accompanying visuals, Philly artist Pastel Williams’ new project Cusp is an experimental electronic-acoustic album full of complex, evocative themes that unfold in a mesmerizing manner.

Introspection infuses Cusp’s lyricis, as Williams often references existential and personal realities, turning inward to navigate them. It’s here where contrasting sounds, like the strong presence of acoustic guitar alongside heavy autotune, speak volumes to the complexity of emotions, and how different they are internally versus what may be seen on the surface.

In the visual project, however, introspection ceases to be isolated to Williams, as credited producer Liv Bellito — frontperson of Major Pursuit, a band Williams played in — showcases their artistic dichotomies through green screens, visualizing internal emotion amidst both external chaos and beauty.

The word “cusp” typically implies a transitional period between two things, and for those who lean into astrology, cusp zodiac signs often experience internal conflict like it is second nature. Williams falls into this transitional period as an Aries-Pisces cusp, something they say is an influential characteristic to the making of the project. They told The Key:

“Cusp comes from the fact that I’m an Aries-Pisces cusp, the project in a lot of ways is about dichotomies and I think ‘Cusp’ is emblematic of that. The contrasting green screens in the video, sudden changes in songs, the use of pitched vocals, and electronic/acoustic instruments are all little ways I tried to create and perpetuate little dichotomies.”

Williams illustrates their fire-water sign opposition in a captivating way. In the video project, they stand in front of a backdrop with a transparent upper half. Their body and the background show different visuals with each track, embodying varying emotions through the different graphics as well as their own movements.

The relationship between the triumvirate of features tracks like “Focus, etc.,” where the background is in complete disarray as a volcano erupts and Williams’ transparent body shows a more calming lightening. Their movements play into the lyrics in an ironic way, as they move around with their face in their hands and snap their fingers, “Snap my fingers while I pace all around the place / know that I’m alright, just look at my face.” Obviously, we cannot see their face, but their movements imply the opposite of being “alright.” The two visuals and Williams’ expressions intricately reflect anxiousness and hesitance.

The album’s closer, “Dream 2 (Forwards Backwards),” is calmer and stripped back, honing in on Williams’ acoustic elements throughout the project, with an additional ensemble of instruments by Rishabh Bhan Singh. Its visuals depict Williams in front of a pink sunset on the beach, their upper half full with clouds of a day sky. It feels cathartic, like a sort of release as it progresses and Williams’ movements appear freer. “I can’t tell if I’m myself now / Myself as a child / I can only look forwards / Backwards and smile,” they sing while alone among others on the beach, the first time anyone else is featured in the visuals.

Departing from their roles in Philly indie rock outfits Beach Bod and Major Pursuit, Williams finds keen individuality on Cusp. The project balances electronic elements while incorporating acoustic guitar that makes its way onto tracks at seemingly perfect times to add a natural effect to the mesmerizing soundscapes. Its visual elements are just as captivating, providing a deeper look into the sonic and lyrical elements that Williams explores on the project.

Listen to Cusphere and check out the visual project below.