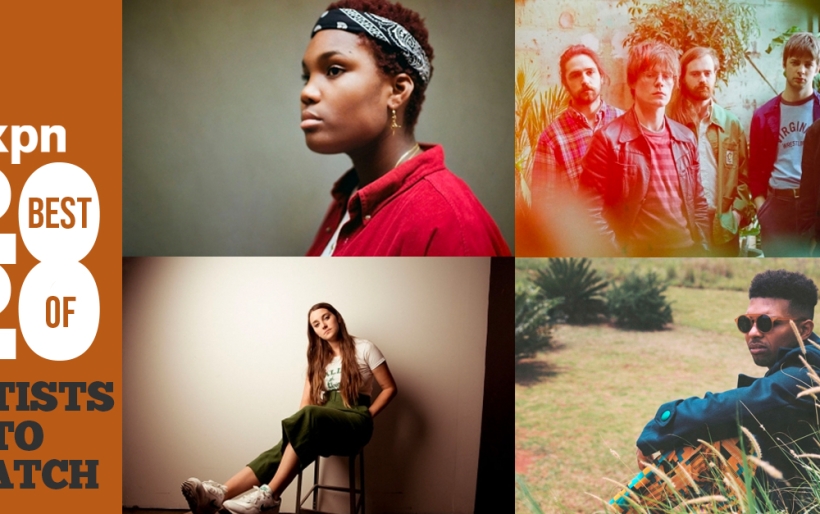 WXPN Best of 2020: Take a look back at all of this year’s Artists to Watch

Music discovery is at the heart of what we do at XPN, and one of the greatest joys of the super weird year that was 2020 was finding up-and-coming artists to listen to. For most of this year, musicians were unable to perform in front of live audiences — but that didn’t mean they stopped releasing music. Some of our Artists to Watch this year were young musicians who released debut albums, while others saw their years of hard work pay off with major breakthroughs and awards nominations. Some have local roots, while others live halfway across the world. Take a look back at each of 2020’s Artists to Watch below.

Almost a year ago, we chose Philly-area native Devon Gilfillian as our first Artist to Watch of the year. His debut LP Black Hole Rainbow came out in January, and was recently nominated for a Grammy Award in the Best Engineered Album, Non-Classical category. Based in Nashville for the past several years, Gilfillian’s had a busy 2020, playing countless livestream shows including our virtual  XPNFest and releasing full-album cover of Marvin Gaye’s What’s Going On.

Funky Baltimore-based jam band Pigeons Playing Ping Pong played one of our only Free at Noon concerts of 2020 back in January. The band formed over a decade ago when its members were in college, but they’ve received more widespread attention this year with the release of their latest album, Presto. They’ve also been hosting their own festival, Domefest, every year since 2009 (this year, it was virtual and aptly re-named “Homefest”).

Singer-songwriter Katie Pruitt released her debut album, Expectations, in February. Pruitt’s Southern upbringing inspired her folk-rooted sound, as well as the stories she tells about growing up LGBTQ in a conservative environment. Pruitt earned a nomination for Emerging Act of the Year at the Americana Music Honors and Awards, and she recently released covers of Neil Young’s “Ohio” and “After the Gold Rush.”

Early James, a Birmingham, Alabama-based roots and blues singer known for his fingerstyle guitar technique, worked with Dan Auerbach on his debut album Singing For My Supper, which came in March, and also recorded live versions of some of the tracks at Nashville’s Easy Eye Sound Studios. Back in the spring, Dan Reed Checked In with James to hear more about his music and influences.

2020’s been a prolific year for Philly’s own Orion Sun. After releasing her debut album Hold Space For Me in April, she shared “Mama’s Baby” in the wake of this summer’s Black Lives Matter protests, recently collaborated with Chicago beatmaker Nascent on the single “Forever,” and even hosted her own beatmaking competition on Instagram. (“Honestly, I would love to see this on ESPN,” she told John Vettese while Checking In this spring.)

Soulful psychedelic band Khruangbin has come a long way since they formed in Houston back in 2013. This year, they released both a collaborative EP with Leon Bridges and a full-length album, Mordechai, which our Kyle Whiting said “radiates with the gentle warmth of an embrace with a dear friend, while showcasing the twee quirks of a [Wes] Anderson film.”

If you’ve listened to XPN at all this year, chances are you’ve heard the title track off S.G. Goodman’s Old Time Feeling. The album was produced by Jim James of My Morning Jacket and released in July. Like Katie Pruitt, Goodman was raised in a conservative Southern community with values that didn’t always align with her own. Now, she writes songs from the perspective of “the insider who is also the outsider” and tells the stories of Southerners who are fighting for change.

Young blues singer and composer King Solomon Hicks released his debut album Harlem this year, named after his home neighborhood and inspired by its deep musical legacy. Hicks’ parents started taking him to jam sessions at Harlem clubs at a young age, and by age 13 he was lead guitarist at the Cotton Club. (For any blues aficionados out there, he plays a Benedetto GA35 guitar.) “421 South Main” was named a Best Blues Song of 2020 by Spotify.

Dutch-Ghanian songwriter Nana Adjoa released her full-length debut, Big Dreaming Ants, in September. Adjoa recently shared her 10 favorite songs with us for The 2020 Countdown, and she was featured as the Facebook Artist of the Day this fall. She was also nominated for a 3voor12 (Netherlands Public Broadcasting) best album of the year award and next month she’ll play the all-virtual edition of Eurosonic Noorderslag, one of Europe’s biggest music showcases.

A few years ago, British-Filipino singer-songwriter beabadoobee had a single called “Coffee” go viral on YouTube (you’ve definitely heard it). She released her debut LP Fake It Flowers this October, and this year alone she’s been nominated for a BRIT Rising Star Award, longlisted for the BBC’s Sound of 2020, and won an NME Radar Award, all while building a following of dedicated fans across the world.

Irish rock band Fontaines D.C. made waves with their second studio album, A Hero’s Death, this summer, and received a Grammy nomination for Best Rock Album. The album’s themes of isolation, though coincidental, really connected with listeners this year. “It’s a reflective album and it’s about finding, or at least believing, that there’s light at the end of the tunnel,” frontman Grian Chatten told NME.

London-based singer-songwriter Arlo Parks is our current Artist to Watch. Her debut album Collapsed in Sunbeams comes out January 29, 2021, and the songs we’ve heard so far are pure poetry. Clairo added harmonies and guitar on the single “Green Eyes,” and Parks also recently recorded a cover of Radiohead’s “Fake Plastic Trees” with Phoebe Bridgers for BBC 1.