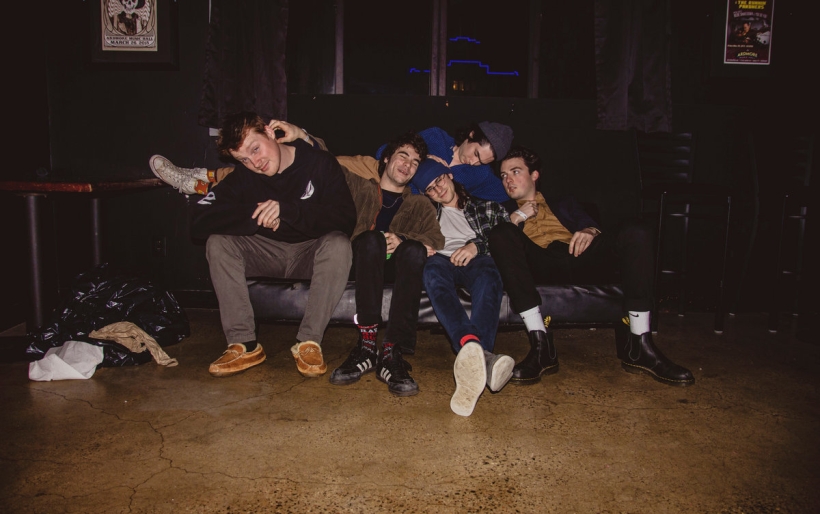 They’re calling their much-anticipated new album Late To The Party, but honestly, this new release from Philly rockers RFA feels like it arrived right on time.

It’s well documented that 2020 has been a brutal year. Between a global pandemic, a racial justice uprising, natural disasters from fires to tornadoes, and a vitriolic election season that seemed to stretch on forever, it almost felt like listening to music purely for fun had become a guilty pleasure, a shameful thing of the past. The most resonant releases of the year reflected on 2020’s turbulence with outrage, despondence, occasional moments of confrontational joy — and rightfully so across the board. But for many folks, an essential part of coping with daily struggles is escaping into the bliss of a good pop song…and so long as you aren’t completely ignoring the world’s problems in the process, that’s totally okay too.

It’s in this sense of mindful release that Late To The Party is most effective; there’s something poignant in hearing Dan Cousart belt out lyrics about friendships and infatuation, about bonding and bro-ing down, about learning to love and grow as a person — themes that can be serious, but are equally lighthearted and free of the weight of the world. The party scene of the opening track finds him singing about the way we used find joy in social settings: “I’m happy you’re happy / everyone smiles as you walk through the room.” On the emotional flipside, the rough and rowdy “Andy Slurs His Speech” boasts clever turns of phrase about “gettin’ in fights over Marlboro Lights,” and let me just say, if you’re so low as to sucker punch somebody over cigarettes once bars open up again, you are a grade-A asshole.

In the pensive rocker “Chinatown,” the band paints bright scenes of foggy memories awash in beer and dinner, with a shimmering sax performance by Will Schade guiding the way. Between slick drums by Alec Powell, a punchy bassline by Brendan McHale, and an arcing riff by Christian Turzo, the song continues in step with RFA’s well-established retro-rock stylings — the melodies are Strokes-y as ever and imbued with lo-fi vocal fry — but at the same time, the licks are more robust and hard-hitting, and the band’s newly expanded instrumentation on this, and the set as a whole, soars.

In addition to Schade’s sax, we hear violin contributions from Mollie Rose on “A Victim of the Latest Fashion,” and “Already Dead”; on the latter in particular, it takes on a vaguely Celtic folk tone, and with a gripping shoutalong refrain, damn if it isn’t RFA’s first Lumineers moment. We also hear beautiful contributions from keyboardist Will Loftus (who, full disclosure, is an XPN coworker and line editor for World Cafe), whose work ranges from nuanced atmospheric textures on “Cold Teeth,” staccato chords on the punchy bop “Small Talk,” and a bit of both on the album’s terrific anthemic pinnacle, “Truly.”

Late To The Party‘s denouement comes in the form of the closing “Esmeralda And The Open Bar,” which vacillates between a solo piano verse in the spirit of Tom Waits’ Closing Time and a full-on rock chorus, with Cousart singing “Take a drink on me, relax, let’s kick it back / think about he good times we always seem to talk about with tears in our eyes, streaming down our faces from laughter.”

Many of these songs describe scenes exactly like this — scenes that most of us have not experienced in a year when we’ve been told time and again to stay indoors and isolated from one another for the good of humanity. (Some of us listen better than others.) And to be fair, many of these songs predate 2020 by several years — the 50s rock naivete of their Herman’s Hermits send-up “Something Tells Me I’m In For Something Good” has been in their live set for years. So no, the album isn’t about 2020 per se, but hearing the music in this context, as a long-awaited but nonetheless surprising drop at the end of a difficult year, totally reframes it, and makes its uplifting energy all the more powerful.

RFA’s Late To The Party provides a window back to simpler times, and offers hope that while the problems of the world that came to a head in 2020 won’t go away when the pandemic is over — and hopefully our awareness and engagement won’t disappear, either — there is a possibility of finding carefree release in music once again.