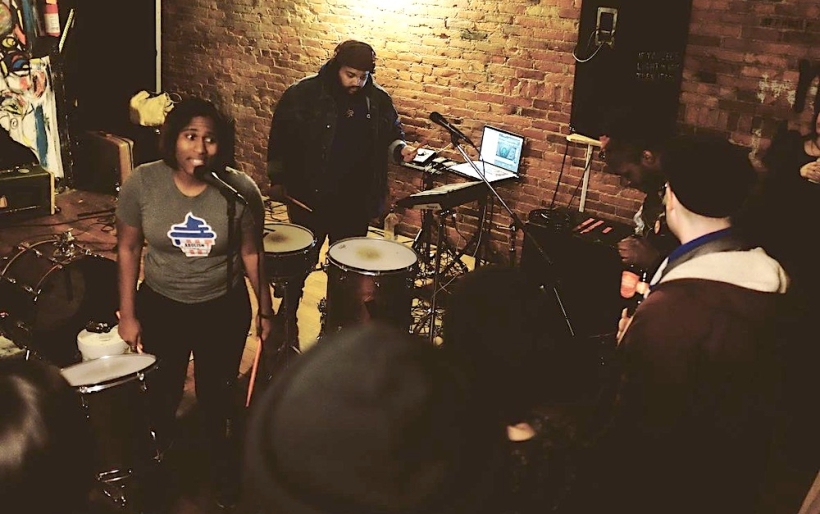 HITS DIFFERENT is a new recurring feature where I’ll be exploring artists and musicians, mostly from Philly, that have songs, releases or albums that go against the grain of their usual repertoire! A rap band making an 80’s hair metal ballad? A noise artist putting out a polka record? Or perhaps the differences are subtle but worthy enough for an examination! In this column we’ll explore the psycho-spiritual cosmology and intimate processes behind these quirky songs and their challenging ideas, what makes the group tick, and ask, “what were you thinking?!” Join me for the trip!

First up is Camp Candle. Last time I saw a bunch of bands play music live was in February. Full disclosure, it was a show I curated to benefit the beloved West Philly community and event center, LAVA Space. Camp Candle was one of the bands on the bill; their effervescent, dreamy sounds beautifully contrasted with both the grimy punk setting and the more aggressive bands in the line-up. Part 4AD pastiche, part 90’s R&B summer jam, the essence of Camp Candle can’t really be summed up in simple terms. Their track, “NRT,” a funkier excursion away from their sci-fi dreampop offerings, is proof of that.

“NRT” is a song about the causality of freedom while inhabiting a marginalized body and simply wanting to exist etched into public space, with sounds laced by an acid jazz beat that swings playfully close to New Jack Swing, smothered in warm tones reminiscent of Zhane or SWV. Here we chop it up with the Hetepsa and NuRa of Camp Candle about finding their groove.

The Key:  So I wanna start with what would you consider the general, or basic Camp Candle influences?

Hetepsa: I feel like — what’s not a CC influence?

Nu Ra: I would say a groove is most important. We dem folks, you know, we like drums, we like things that have rhythm to it. That’s what we gravitate more towards when we start records, a groove.

H: And when you combine the groove and the feeling — I don’t want to sit here and list genres, between the both of us we listen to pretty much everything, but not anything. But something that evokes emotion, even our most feel-good songs, there’s an emotion behind that. I’m inspired by things that make me feel something in the moment, regardless of what that feeling is, but it’s moving me emotionally. You’re rocking with it, you’re grooving with it, but it’s not just moving you because you can dance with it, but because it’s moving you emotionally.

TK: I feel like shoegaze and the post-punk stuff [has inspired you] too, which you guys have added that groove to, especially on songs like “Save Me”.

NR: I’m still digging deeper into the shoegaze scene. As a side note, I really didn’t listen to the first Curve album Doppleganger, for instance, but I’m still delving into that because I still want to pull influences from that. That’s what I’ve been doing most of quarantine, just really delving into dreampop.

TK: What generally informs the writing process for ya’ll and is experimentation a part of that?

H: I feel like every record can be a little bit different. There’s not a specific process that we have, it’s really about capturing a moment and what we’re doing or going through or what’s influencing us at that moment. As he said, it does start with a groove, a baseline, pads– as far as writing, sometimes it happens when we’re together, sometimes apart. We don’t have a formula, it’s just like, it gets done when it gets done. A lot of times when I’m writing, I don’t necessarily say, “this is what I wanna say”.  I was laughing when you asked for the “NRT” lyrics because a third of this I don’t know what the hell [these lyrics are] talking about (laughs), but I was looking at them at the same time like, ‘oh this is what we were going through at the moment, or this is what was going on in the world and this actually reflects that.’” So sometimes a record writes itself and tells us what it’s about later.

TK: What was the initial idea behind “NRT”? The beat is like very different, very unique compared to your other songs — or am I just hearing it weird?

H: No, it’s definitely different, we definitely took a step in another direction. I remember very specifically, we were about to play a show at the Pharmacy, and Nu Ra came up to me and was like, “listen to this.” There was a Jermaine Jackson drum sample, you had the bass, the pads — he had pretty much most of the structure of the song, we messed around with the arrangements later, but he had the melody he sings on the song, “Tell me where I’m going / tell me where I live out my dreams” and everything else was gibberish [hums melody badly], and I was like, “I love this.” So of course I snuck my own melodies and wrote lyrics and tried to stick to his melody. He brought it to me like, “what you think about this,” he’s always mad humble and I was like, “this is fucking amazing! we’re making this a song!” I added some guitar in and my parts but like, it really had this existence before we came together on it and it just kept growing over time. It challenged us to get out of our comfort zone. That whole project, we did a lot of stuff percussively, like playing on glass bottles, we just had a lot of fun with it and captured that moment in time where we were just like, having fun.

TK: Translating the hummed and mumbled lyrics is a very punk rock way of doing things.  A lot of punk bands are just like, “rahrahrahrahrah!” and then they add lyrics over time, sometimes they wait until they’re in the studio. Like, I was recording a track for my band and I changed the lyrics right before I was going to record and the guy recording — BJ from Red Planet — was like, “oh the old write the lyrics for the song day of recording trick,” so apparently a lot of punk bands do this. They been playing the song for 2 years and they’ve just been like, “rahrahrahrah!” the whole time.

TK: So, the beat is very TLC, Soul II Soul, PM Dawn. Was that an influence?

NR: Yes, of course! Im actually sitting here watching Crazy, Sexy Cool with my kids. It’s like that early 90’s feel. A few of my friends, I played PM Dawn “Paper Doll” for them, and I’m like, “listen to these arrangements, how they take these soul and funk samples and just like, add these lush arrangements over the sample.” So, I had this new interface and was going through all my samples and grabbed this Jermaine Jackson sample. The Jacksons can be so sharp and meticulous with the drum arrangements, but I had this pad and decided to not be so technical and cold and methodical and just allowed myself to express myself. The way we did it was, not really proto-punk, but we didn’t have any set guidelines on how we were going to approach it. Even the song title — I just dragged my hand across the keyboard and — “NRT”.

H:  We gave it a meaning though, now it means “No Real Title.”

TK: You guys always do that, you give something a title, then the meaning kind of evolves into something. Like, your band name kind of happened that way, right?

H: Yeah, we tried to be random and now it means something.

H: I guess people kind of put us in this box — he does the production and I write lyrics — but it’s really so much more collaborative than that, it’s really the energy that goes into it all. With “NRT” there was just so much going on, not with just people, but with the environment and our personal lives. That freedom I think is something that speaks to our personal journeys, with the chains that not only people put on us but also the chains that we put on ourselves. So freedom is something that we are always going to be struggling for, it’s always going to be something we desire because we’ve never been taught or encouraged to have it.

NR: I was at work the other day, and I notice the energy and vibe at my job, where a customer comes in and it’s like, “Mark!! You got a customer.” And there’s this like, energy, where people make you feel like you’re in trouble, like you’ve done something wrong. And that’s where my general sense of freedom… I don’t wanna feel that, like I’m wrong. I’ve seen it for generations, with folks that look like us, people just look at us like we’re wrong, like we have to be tamed, we have to be held back, or there’s something wrong with us.

H: It reminds me of the song “Fear” by Kendrick Lamar, and all these different places where there’s this fear, and fear is tied to a lack of freedom, right? You got it at home, you got it out in the world, you got it with a parent, a friend — there’s all these constraints, all these places where things can go wrong. It’s like, I understand that I have to help myself, but I also understand that there’s this fear here, and because of this fear you’re allowing your fear to not just let me just be.

TK: Another album that makes me feel that way is Janet Jackson’s Control. I know that song and album is about a very specific thing, but it feels universal in that it’s about being who you are in this sense where you’re embodying a personal utopia and not trying to force yourself to fit into something. I love albums, especially by Black artists coming from a more traditional R&B standpoint, that fulfills that energy, it’s needed and really impactful when that happens and that’s what “NRT” reminds me of in a lot of ways. Will there be more songs like that?

H: No idea. [laughs] And you know, our first song after everything, it might be surprising to us, so I have no clue. There is a certain methodology to his production but yes, we do give ourselves that space to experiment, so yeah, the next song might just be like, “what the hell is this?” We allow ourselves to play and experiment because why not? Why dampen ourselves creatively just because we have this certain sound and we have to live up to that, no let’s just do what the hell we wanna do.