Creating Music for Lasting Change: Beyond The Bars' organizers on winning the Lewis Prize For Music and their vision for the future - WXPN 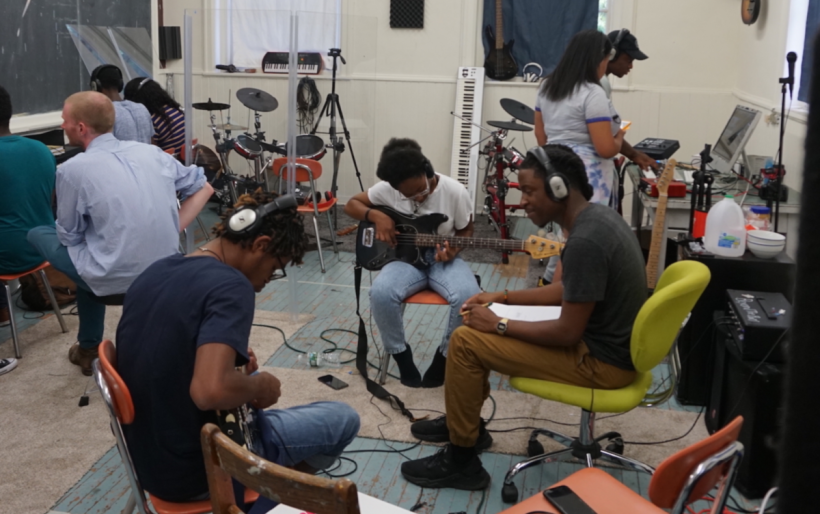 Beyond the Bars | photo by Yoni Kroll for WXPN

Creating Music for Lasting Change: Beyond The Bars’ organizers on winning the Lewis Prize For Music and their vision for the future

The Philly non-profit Beyond The Bars launched five years ago with a mission of using music to interrupt the cycles of violence and incarceration in Philadelphia. This week it was announced that the program is a recipient of an accelerator grant from the Lewis Prize for Music, which means Beyond the Bars now has $500,000 to build and grow over the next four years. For an organization that started small and has been largely volunteer-driven up to now, this is huge.

Beyond the Bars co-directors Matthew Kerr and Christopher Thornton joined me on the XPN Local Show this week — along with program coordinator and leader Bets Charmelus and Yahya Diacko, a student currently enrolled in Beyond the Bars – to talk about the organization’s evolution since founding in 2015, as well as its network of local musicians (like Pierce Jordan from the celebrated punk band Soul Glo, and veteran rapper Reef the Lost Cauze) who are instructors and mentors to the students. We also hear a song written and recorded by students, and learn more about the collaborative process behind it, and we hear everybody’s hopes and ambitions of what might be possible in the near future thanks to the Lewis Prize Grant.

Listen to the full interview and read excerpts below.

…on the beginnings of Beyond the Bars, and where the program has evolved over the years.

Matthew Kerr: We started out as a music program for youth who were incarcerated. During that time, we taught way too many young people who said it was their first music program. We’d be working with incredible young people who became way more talented than me in no time…who were leaders, who were showing compassion through music, who were just really showcasing who they are through music. But they kept saying “this is our first music program, we wish we had this before.” So…we listened to our students! “You said you wish you had this program before, you want to have a student-centered program throughout the city that’s accessible.” And we started out small, running small community-based music programs, mostly in West Philly. And we expanded over time to start running as many music programs for our young people as possible, where they could be learning instruments, forming bands, writing songs.

…on the network of instructors and mentors from the Philly music scene.

Christopher Thornton: It was kind of our intrinsic network. Finding teachers that were appropriate, so to say, teachers who we felt had the right spirit as far as working with young people, and the right spirit even as far as looking at the system, and how it’s positioned our young people, and positioned the community. Pretty much if you found one of those teachers, they know five to six teachers who are similarly aligned. We haven’t had to do a lot of searching; you know so many great musicians, they know a bunch of other great musicians and people, and not just as far as talents, but people with big hearts who really care and love to do it.

Bets Charmelus: Sometimes Philly can be small in a bad way. This was one of those circumstances where Philly was small in a very, very good way.

…on the collaborative, and student-driven nature of songwriting workshops in Beyond The Bars.

BC: Often times students will come through with an idea they have and will say “hey, I’ve been thinking about this, this could be cool.” Sometimes they go into their own mini break-out sessions, where it’s like “okay, I just want this guitarist and I to sit down and really flesh it out.” Sometimes it’s like “I’m stuck here, I don’t know what else to do,” and the bigger group is like “okay, let’s shed it, let’s figure it out, let’s figure out the chords.” It’s very organic. [And] the student-driven part of the Student-Driven Music Academy is the key; they decide when they’re ready, and really in a lot of ways that’s the best way to move. You can never tell an artist when the song is done, and they’re artists in their own right. We kind of give them pointers or tell them what we would do theory-wise, give them offerings and let them run with that.

…on empowering students to lead as much as participate.

CT: As much as possible, we want this program to be student-driven. Our idea of the idea of the organization long-term is students taking our places in every aspect of the operation: teaching, organizing, making decisions, all that. It is extremely important for us to have our students to move from the space of learning – learning fellowship with music and with other people, and how to work with them – to this place of showing other people. And that can happen pretty fast. There’s not a lot of musicians who can’t learn something from one another.

MK: When you come into a Beyond The Bars space, you feel a lot of love, and a lot of rally positive culture. And that was built by the students.

…perspective from a student.

Yahya Diacko: When I started out in June, July-ish, I really wanted to get back to playing guitar. When I was younger we had music throughout elementary school. And then when I got to middle school, we didn’t have music classes like that. I really wanted to do music. So when I saw this email come in through my mom’s phone, I was very interested in this, and when I called Matt, everything changed. Recording is surreal; I never thought I’d record my own music.

…on what the grant from The Lewis Prize means for the future of Beyond the Bars.

MK: There’s three things I’m really excited about. We have so many amazing artists who are teachers with us, who have done [this] completely unpaid for about four or five years. We’re really looking forward to making this an equitable institution where we can compensate these amazing teachers. We’re really excited about expanding the amount of work we do, building more and more musical spaces throughout the city with our community partners. And now that we have funding and we can build a sustainable infrastructure, this is something we want to pass down in our community through years. This is no “we got an outside hire from Ohio” some year, no, we want to be passing this down through generations.  We want Beyond the Bars to be a music program that Yahya is running, that Aquil is running, that Sky and Xadyah are running, that our next generation will be taking this over, and they just keep going and keep going.

BC: One of the things that’s been on the roadmap for the organization for a while, specifically from the student music perspective, is introducing an industry aspect. We have the Student-Driven Music Academy, which is musicians and bands. We have the Practical Producers [program]. What happens if we have students who come in and may not want to play music for the rest of their life, but want to be involved in the industry? Getting somebody who might want to be a manager, who might want to be an A&R. … Being able to do that, and have courses that teach specifically that, and have our own self-sustaining ecosystem, where the industry side is managing the bands…that right there gets me really excited, and I can’t wait to see that happen.

CT: I think the final thing is working out our place working with the community and partnering with other organizations for change in our community. Recognizing that the reason we are existing is because of the circumstances and conditions in the city, where we have an underfunded school district, and an over-funded prison-industrial complex, whether that’s the police or the jail system, or the system that’s putting youth through all these things that aren’t exactly jail. And we really want to see that stuff change. It’s not as important for Beyond the Bars to exist forever, versus the city to actually change so people’s needs are met.

YD: I see the program being very very successful just by the way it’s been run by Matt and the other teachers. It’s not just the teachers and higher aboves, it’s the students. When I first got here, I really didn’t know anybody. I was just the new person. And I had to fit my way in, but not really — I found a way to bond with the students that I never thought I would.