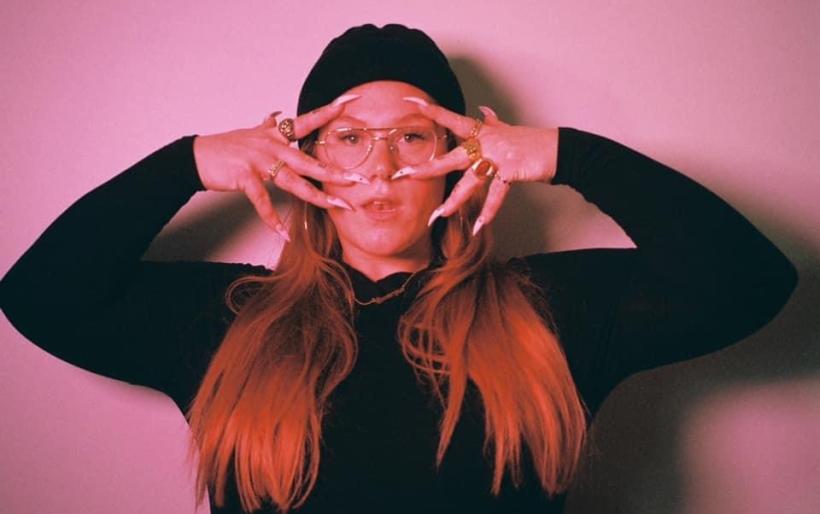 Suzanne Sheer’s music is at once vulnerable and empowered. Her dreamy, melancholic pop anthems drop the veil to reveal the interiors of lust and love: indecision, motivation, self-worth. Her voice can be casual, almost reclined. But even in those moments it seems to possess a bridled power. At other times, its wild strength is freed.

After years of releasing singles, Sheer’s 2021 agenda includes The Blue Hour, her first LP, inspired largely by visual experience. In a recent interview with The Key, she tells us about art that moves her, pointing especially to Kara Walker’s print the secret sharerer.

Housed at the Philadelphia Museum of Art, this contemporary print uses aquatint tone to create a black and white palette that mimics the cut-paper technique popular before the rise of photography. Part of a series that explores the impact of the transatlantic slave trade, the work suggests the enormity of that history while also evoking interpersonal themes of seduction and betrayal. Layers of silhouetted figures depict both interior quiet and fierce expressions of emotion, and resonate with the personas represented on Sheer’s forthcoming album.

The Key: How do the visual art and music scenes collide in your corner of Philly music?

Suzanne Sheer: The Tiny Room for Elephants festival is an incredible collaboration of visual art and music. In my experience in the music scene, mostly you only know other musicians. The visual art world and the music world don’t collide much. But Tiny Room for Elephants brings together these worlds. The passion and the love of creating is exactly the same across disciplines. I love Tiny Room for the same reason that, growing up, I was obsessed with music videos: bringing the visual and the musical together is so powerful. I would love to see more of that in Philly.

TK: Where do you look for visual inspiration?

SS: There’s an artist in Philly named Alex Da Corte who makes insane visuals and videos. With my music, I’m becoming more experimental, and I credit that to artists like Alex. Before, I was stuck in a box of a single sound. Alex’s work is so playful, experimenting with color and timing. His out-of-the-box style helped me out of my own box.

TK: What is your favorite art work in Philadelphia?

SS: There’s an amazing piece at the Philadelphia Museum of Art by Kara Walker called the secret sharerer. It’s from a series called An Unpeopled Land in Uncharted Waters. When you first look at it you see a sea of black, and then what pops out is an image in white: a woman reaching her hand onto the neck of a man who is tilting his head back. At first glance, it looks romantic, passionate. But the more you look at it, you see it could be the exact opposite: she could be taking his soul from him. The look on her face is so powerful.

When you take your eyes away from this main image, you realize there’s even more going on. You see the outline of two people in black silhouette. This is positioned beneath the more prominent image in a way that makes you wonder if the impassioned scene occurs in the minds of the figures in black. The second time I looked at it I wondered, “What if this is part of something they’re imagining?” Keep looking, and more silhouetted faces emerge. There’s so much happening in a single square.

TK: How has visual art influenced your music, particularly projects that you’re working on now?

SS: My album The Blue Hour will come out later this year. The title is inspired by visual experience—the time of day right after sunset—and many of the songs are influenced by visual ideas. One song is about wishing you could erase someone from your memory, like in the movie Eternal Sunshine of the Spotless Mind. We called it “Blue Ruin” because there’s a part of that movie where Kate Winslet’s character is talking about her hair dye, and that’s the name of the color. That movie is so visually stunning: the lighting, the set, the helmet that he puts on. Cinema has inspired much of the album. And color. Reds and blues and blacks. The imagery of light and darkness.

TK: Are there connections between the secret sharerer and the persona represented on The Blue Hour?

SS: On the album, there are two sides of me. One is the side that’s confident and sexual and in tune with myself. I see her in the powerful woman pictured in the secret sharerer. But if you look at that woman a different way, you might see desperation. And that persona is on the album too: the woman who needs to be needed, who wants a man to be totally overwhelmed by her power. The contrast of black and white in the secret sharerer is simple, but it speaks so powerfully of the two personas represented on the album.

Suzanne Sheer’s album The Blue Hour will be released in mid-2021. the secret sharerer, though not currently on view at the Philadelphia Museum of Art, will be available for viewing by appointment in the Study Room for Prints, Drawings, and Photographs when the museum fully reopens.