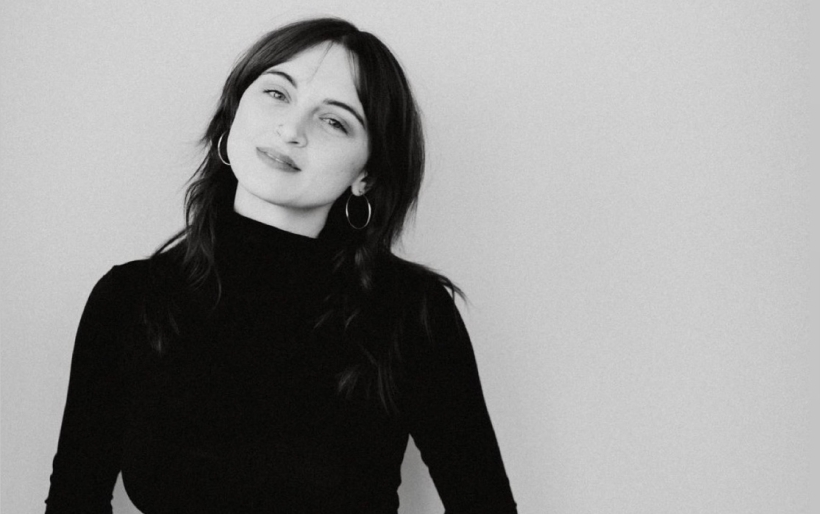 Anika Pyle talks about mixing music and poetry on her solo debut Wild River, shares a Valentine’s playlist Dancing Under The Philly Moon

You might know Philadelphia singer-songwriter Anika Pyle from one of her bands — Katie Ellen, the country-infused indie rock project she’s fronted for the past few years, or Chumped, the punk rock band she led while living in New York City. Maybe you caught one of her collaborations with Roger Harvey, or Gladie’s Augusta Koch and Lemuria’s Sheena Ozzella. This Friday, Pyle will release Wild River, her first solo work under her own name, and it’s a stunning collection that interweaves songs, spoken word, and some moments that blur the lines between the two.

“I had been wanting to challenge myself to make a solo record for a couple years,” Pyle told me while guest DJing on the XPN Local Show this week. In 2019, she was invited to perform at a Philadelphia Free Library event celebrating songs and poems and their relationship to one another — a booking that gave her an initial push. And as she was working to put a set together, her father died.

“So in order to approach this show, which was a few weeks after he passed away, I started writing some material and synthesizing some material that had to do with thinking about his passing,” Pyle says. “I loved putting that set together, it was so crucial for my own mental health, for my own process. And so when 2020 turned over, I decided to record it.”

The album features sparse, emotionally cathartic ballads like “Orange Flowers,” as well as synth-driven pop moments like “Prayer For Lonely People” — a song where Pyle further challenged herself by learning to write on keyboard and build drum loops. Overall she calls Wild River a look at families, the way they often balance a legacy of pain with one of joy, and how they manage to find love despite grief — a point hit home with samples of her grandmother’s voice sharing crucial life lessons.

The album also features interludes of Pyle’s spoken word like “Failure II,” “Failure III,” and “Haiku For Everything You Loved and Miss.” She’s been publishing a poetry zine during quarantine called Life Is A Funny Ha Ha, available from her Patreon, and we also discussed the writing she’s done parallel to her music career; “I probably wrote my first poem at five, it’s been a lifelong love affair.”

Reflecting on poetry’s role in relation to music, Pyle says “I think people are so scared of poetry. I feel lot of people are like ‘I don’t know how to read it, it’s so confusing, it’s really weird!’ But so many people connect to music, because you have an additional avenue for connection: you have sound, which is sort of somatic, you feel it. Sometimes I think ‘But what is a song but a poem set to music?'”

Listen to Anika Pyle’s full interview on WXPN Local below, and head a little further down for an extended edition of her Philly Love Songs playlist.

Dancing Under The Philly Moon by Anika Pyle

Love under the moonlight is a frequent poetic trope in romantic tunes. There’s something so magical and mysterious about the moon, like love itself. I love the song “Moonglow” by Ethel Waters — a jazz & soul singing legend born in Chester, PA. Waters was the second African American to be nominated for an academy award, the first African American to star on her own television show and the first Black woman to be nominated for a Primetime Emmy. Waters blazed the trail for powerful Black women in the entertainment industry — like Cicely Tyson, who passed away on January 28th — and said of the legacy she’d like to leave “I want to go home knowing I loved generously, even if imperfectly.”

Billie Holiday, my favorite singer of all time, did a rendition of “Moonglow” much later and I was tickled to discover this earlier Ethel Waters version. My favorite thing about Waters’ delivery is the way she rolls her R. It’s like the tide rolling in. It’s only apt that following Ethel Waters is “Ebb Tide” by The Bluebelles & Patti Labelle, one of Philly’s most gifted vocalists. The accompaniment on this song is so oceanic.

After that I added “You & I” by my very own real-life love Roger Harvey. Roger references the quarter moon in his first line, when the difference between high and low tide is least recognizable. The moon controls the earth’s tides and when the moon is closest we experience high tide, when it’s farther low tide.

In love, we strive for that quarter moon equilibrium but we have to accept that love ebbs and flows and must endure both sun and rain. Knowing that love is imperfect and choosing to love generously anyway, that is the greatest mission of our lives.

After all the talk about the moon, I added a few songs by some of my greatest friends that reference the sun. Not as historically referenced when it comes to love but certainly invoked when thinking of happiness. In “Stuck,” Kayleigh Goldsworthy starts the song as being blinded by the sun, blinded by that brilliant kind of love where you’re suddenly like….damn. I’m in it! In Gladie’s “When You Leave The Sun,” Augusta Koch references brain chemistry and its role in both love and happiness.

Speaking of brain chemistry, dance is so good for your brain! There’s a reason why music often invokes images of dancing with our lovers. Dancing releases the four happy chemicals in our brain or “DOSE” chemicals Dopamine (reward), Oxytocin (love or connection), Seratonin (ease or peace), endorphins (endurance). Dancing with a loved one is this explosion of somatic or embodied reward that you just want to last forever. So I included “Around Your Room” from Kississippi and “December Boys” by The Goodbye Party which both reference dancing with a lover. I followed it up with “Have to Hide” from Mikey’s other project with Sam Cooke-Parrot of Radiator Hospital: The Afterglows.

The song repeats “Show me what you have to hide” — a statement, when you think about it, of true love and trust. It is the realest part of any loving bond: showing someone the deepest, darkest, scariest parts of yourself and being met with love, compassion and empathy.

Sometimes we don’t share what we have to hide because we’re afraid that the person on the other end of the line won’t accept us, won’t understand us, won’t even try. The fear of who we are at our core, all the complexities of ourselves, exists because the person on the receiving end has to make a choice to respond with love and understanding.

As bell hooks says, “love is an intention and an action” — it is a virtue and a practice, a commitment. A lot of us don’t choose love, we choose fear. We choose to humiliate, to shame, to blame. We choose not to see people and honor their wholeness, the waxing and waning, the ebbing and flowing. We instead reject them. We have gone so far as to write this dehumanization into law. Instead of meeting difference with love and light, we respond with shame and shadow.

I ended the playlist with Nina Simone’s “To Be Young Gifted and Black,” a love song for Black identity, an ode meant to combat the centuries of shame foisted upon Black boys and girls for simply being born as they are. Simone wasn’t deeply connected to Philadelphia but she did relocate to the city to apply to the Curtis Institute in the early 1950s. After being denied entry, she began to play in an Atlantic City nightclub and was told she would have to accompany herself on vocals. A likely crucial part of her path.

Written as Simone said to “make Black children all over the world feel good about themselves, forever,” I can’t help but see in “To Be Young, Gifted and Black” not only a model for love, self-love, community love, but also a direct thru-line from this song to Amanda Gorman and her plea for a more courageous and loving society. To live in love despite fear, to practice light despite darkness, to commit to our truth despite our shame takes incredible courage. As Gorman reminds us, that courage lives in all of us “if only we’re brave enough to see it. If only we’re brave enough to be it.”