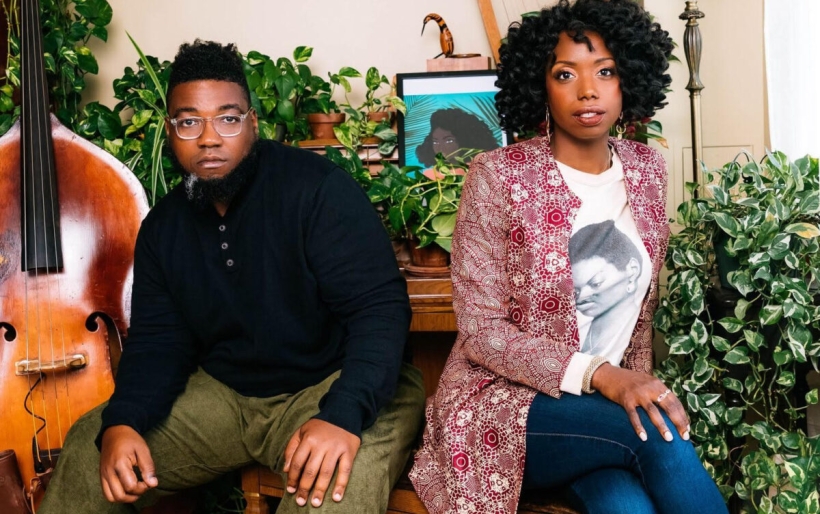 On this week’s episode of Expansions in Jazz, Julian Booker is joined by harpist Brandee Younger. The Long Island native talks to Julian about her formative years learning the harp , her extensive list of work as a supporting musician for artists across the musical spectrum including singer/songwriter Moses Sumney and drummer Makaya McCraven, and her most recent album, Force Majeure, recorded at home during the pandemic with her partner, bass player Dezron Douglas.

Listen to their conversation below, and read some highlights (text has been edited for length and clarity).

On adapting her tastes to the harp at an early age:

On the music of Alice Coltrane and Dorothy Ashby and how it influenced her:

“When I discovered them I was like, ‘oh my God, this right here, this is what I want to do.’ My introduction to Alice Coltrane was a CD that my dad got me. The first two tracks on it were ‘Blue Nile’ and ‘Turiya and Ramakrishna.’ ‘Blue Nile’ is harp, bass and drums, and she is swinging a blues with glissando. It was a sound I had never heard before, but I knew that I liked it. With Dorothy Ashby, I discovered her, I think, in the way that many people did: [Stevie Wonder’s] Songs in the Key of Life. Dorothy Ashby was playing the music of that time…she was doing what I realized it was that I wanted to do, which is playing the music that spoke to her.”

On how the approach to her instrument changes depending on who she is playing with:

“You get people who want you to record a part, and then you get people who want you to be ‘you.’ For years, especially with hip-hop recordings, it was: ‘I want that Ashby vibe on this.’ And for a lot of jazz recordings: ‘I want that Alice Coltrane vibe on this.’ I was always so flattered when people asked for that, but then I was more flattered as time when on and people were like: ‘do your thing on this.’ With a lot of the hip-hop sessions, they like things to be very precise…but, musically, I do try to execute something that maybe they wouldn’t have thought about if they were just using technology.”

On recording her latest album Force Majeure with Dezron Douglas during the pandemic in their New York home:

“The plan was never to turn it into a record. We did one stream planning to do one stream, which was replacing a concert we were scheduled to do at Columbia University. We usually don’t play as a duo…after the first stream, we realized the feedback was: ‘I’m so happy you guys played today and just brought me joy,’ people were looking forward to it…it was never my intention for those streams to come out of the pandemic, but I wanted something to come out of the pandemic. So when Scotty [from record label International Anthem] approached us, we said, ‘we’re just going to keep doing what we’re doing,’ and Scotty said, ‘that’s exactly what we want.’ Things got really dark, protests starting happening outside the window, they starting building the mobile hospitals…I think a lot of that comes out in the finished product.”

On her work as a music educator:

“I began to get more students that wanted to learn what I was doing…I really had to take a step back and try to think about what I was doing. How can I share what I’m learning on the stage when I’m having my behind handed to me at the Blue Note by Jack DeJohnette, and I’m on stage with Pharoah Sanders when he walks off stage and I’m there left to improvise, and I’m scared, and I’m shaking? All of these experiences really made me a stronger musician…so it became a brand new learning and teaching experience to try and relay what I am learning every day, because I am learning every day…for me, it’s rewarding to not just watch [my students] grow, but to also grow together.”