Checking In With Bad Apple Commune: Listen to three forward-thinking albums from Huey, The Cosmonaut, ZekeUltra, and Savan DePaul - WXPN 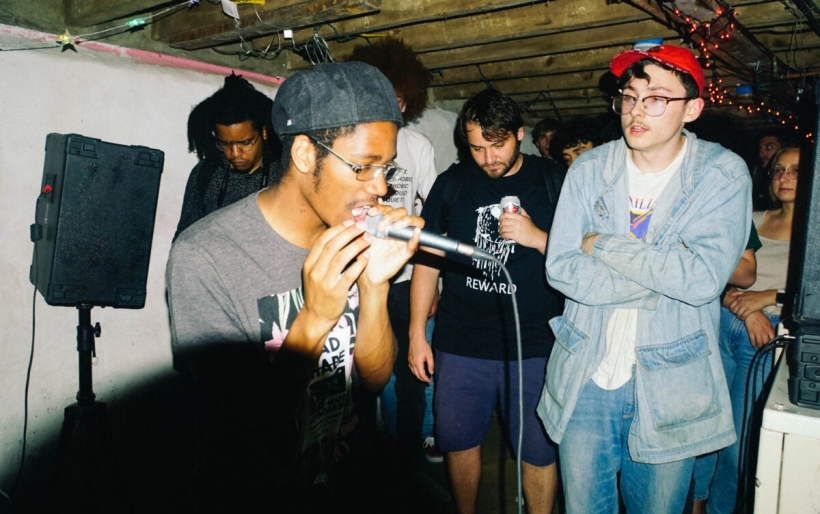 Checking In With Bad Apple Commune: Listen to three forward-thinking albums from Huey, The Cosmonaut, ZekeUltra, and Savan DePaul

Bruh, I’m sick of COVID. I miss the grimy basements, the beer-soaked music halls (and I don’t even drink!), the dusty record stores, and, frankly, just hanging at friends’ houses making trashy beats or plucking even trashier guitars through worn amps. The energy of the mostly-hip-hop collective Bad Apple Commune is the perfect remedy for this feeling of displacement, particularly the recent to recent-ish, releases by three of its more prolific members: Huey, the Cosmonaut, ZekeUltra and Savan DePaul.

Their ideas, collective approach to creating, and basement-show-as-recording-template is a total vibe right now. In three newer works from these members, we see the growth, progression, and the promise of a post-whatever this is world that, on the surface, feels like a reflection of the worrisome banality we’re all experiencing, but in reality are maps to a future bright and resplendent.

Huey, The Cosmonaut’s latest release embodies the post-COVID spirit of rummaging through crusty bins, strange things we’ve kept stored in our apartments and finally dusted off after spending months secluded indoors. A sprawling, often meandering collection of 15 songs with the equally sprawling, meandering title Spring Garden Moonbase: A collection of memories, demos, raps, moments, nights, sunsets, shows, meals, and train rides. 2018-2020., it is a soothing ode to the mistakes, blunders, and happenstances that make up the lived human experience. Chock full of beautiful organ and synth chord progressions, elegant vocal deliveries, all wrapped up in transfixing experimentation, the record sees Huey floating around like a nerdier Drake in some instances (“Run It Back”), and a mellower, Nuyorican Soul / Black Lily version of Chairlift or Blood Orange the next (“Rainbows”).

Despite its seemingly haphazard nature as a compilation of Huey-produced throw-aways and SoundCloud ephemera, and despite the varying energy of guest stars and collaborations with fellow Bad Apple Commune members as diverse as Zeke Ultra and Jewelssea, the record’s cohesion is to be applauded. Held together by a lilting sense of melody and melancholy, especially on standout track “New Friends?” (I prefer the slightly dustier demo version) with its wonderful refrain speaking of loneliness and lack of connection (“I just want some new friends/I just want a new team/I just want to be again”), the absence of any really hardcore sounds makes this record perfect for listeners emerging out of a sleepy, foggy winter and into a more hopeful spring. “The unifying principle of these songs is just imagining you are in the basement of some west or north Philly house venue listening to beats, songs and raps,” writes Huey on Bandcamp. The album closer “Focus with the Brilliant Dan (Live at Kiyoshi Island),” recorded live with the crew’s full energy on display, brings this home. With the uplifting messages on Spring Garden, laced with a tinge of the somber, it’s definitely a unifying principle listeners can get behind.

ZekeUltra, by constrast, brings us a record as dreary, worn, and slurred as we’ve seen in the post-trap, post-What a Time to Be Alive era. From Time is a strange waking dream of an album, so blissfully inert that it unfolds like a slug on lean whose whole body is unraveling on a icey sidewalk.  Opening with the track “Volvo”, an unfortunate, borderline vulgar tale of a sexual tryst that has left both participants in their feelings, its awkward piano stabs and piercing harmonics are the perfect oscillating bits of noise to marry with Zeke’s slurred, drunken flow. The song ends with a bit of shambolic soulfulness as ghostly voices bury the samples in a wash, flowing into the perfectly titled “100 Meters/Moonlight”, a song that, already laden with a beat that sounds like an old man playing 1970’s adult contemporary jazz 8-tracks in another room during a rain storm, is punctuated by a transition into the mushy, dreamstate– the “Moonlight” part standing as tear-soaked contrast to the “100 Meters” part. As road weary as the track is, and yes it’s really early, but “100 Meters/Moonlight” is a strong contender for my favorite song of the year.

It may seem like the record’s heights have been reached by the second song, yet Zeke manages to create a bewildering, heavily dosed soundscape, music so breathlessly morose that it feels claustrophobic. Even songs like “Sun’s Out”, with its deceptively upbeat slow-shuffle jazz, are loaded with Zeke’s somber lines: “I kept my head down / and took off from the block when the gun sound.” From Time is replete with hazy anti-anthems that sound like a vaporwave remixes of a songs left off of the Moonlight soundtrack laced with raps extolling a nearly barbaric approach to hetero-normative relationships and half-stories whose author constantly faces the downward spiral with no lifeline. “Comet” is just auto-poetic downtrodden emissions both beautiful and intense, its beat with its warped, thudding bass that sounds like your stepdad made it, drunk fucking with some old dusty ASR-10 or SP1200. At its core, From Time is the kind of melancholic hip hop that entrances, a slang-drenched study into the dark and the fantastic.

Encompassing both Huey’s penchant for playful, yet sweetly sad diatribes and Zeke’s dark, cynically poetic outlook, is Savan DePaul, possibly the most explosively talented member of the Bad Apple Commune. Their discography is a wide-ranging feast for listeners who fiend for the noisy underground we saw emerge at the turn of this century. With records like Acid Rain II, it’s clear that DePaul is not only a student at the alter of artists like Antipop Consortium and Company Flow, but a budding master of the genre. The record opens with a treatise against the posers and gatekeepers, an anthem that burns with an incendiary, dreamlike energy, “To Reside Within the Belly of the Beast.” After guest MC Kitty Got Claws laces the beat with fire, DePaul drops tone-setting bars spit with their signature heavy-voiced, boldly nerdy vocalizations, riding the beat with an uncanny tightness. “Silence rings upon those that say they’re regal / while they display hyper-masculine egos / they rather bicker over sales figures than help niggas / unearth the weight of the US system.” Lines like this define Acid Rain II, an absolutely vertiginous album filled with sure, powerful, and confident beats comparable to anything from the post-Rawkus indie rap era, extending beyond even that to dip its steely, yet soulful, rusty talons into a mercury bath; this record fucking flows and it’s sharp.

“Break yourself (freestyle)” is an absurd drive-by-on-Cybertron type beat that marries itself to DePaul’s caustic, assured ryhmes (“even if you don’t trap, we all trapped in our visions / imported straps and the extension of our dick ends” they rap), transitioning perfectly to the even more post-apocalyptic track “falling asleep on the shores of kiyoshi island” (if you’re keeping up, this marks the second ode to the late, great West Philly house venue Kiyoshi Island in this article!), a song that has no business being as perfectly wavy and cosmic as it is earthy and lucid. Some of the noisier moments on Acid can feel a little chaotic, as strange, discordant sounds splash around with dreamier samples and synth washes, but DePaul has a cinematic understanding of production and, just as importantly, sequencing. This isn’t just a string of singles or snippets, it’s a work that transcends even the album form. By the time Huey, the Cosmonaut shows up on “odeAstrid, an afrofuturist’s dub” to help slow things down, you’re fully immersed and prepared for the brilliant “Mist Burns.”

A track that would be out of place in the hands of another producer, “Mist Burns” is an almost Reflection Eternal 70’s soul dip, a song that has DePaul just spitting relatable darts (“A paranoia exists within me / Afro-pessimism won’t shift my 16s”) over an impossibly soulful sample. If this was the only track you heard from Acid Rain II, you’d put it on a mixtape with Erykah Badu and Toro Y Moi and be shocked at the unfiltered entropy displayed on the album’s other 20 tracks. And while tracks like “94 Crime/ Just(ifying the Means)” make valiant attempts to provide one of the few summer banger / barbecue-in-the-park tracks, it’s the wild vibrancy, clever wordplay and bizarrely pertinent lyrical display that makes this a phenomenal record.

My worry though, is that heads won’t get to hear Acid Rain II or that if they do, won’t hear it with the proper ears. Savan DePaul’s insistence on creating a world they can survive in, where they drop references to science fiction, anarchism, and queerness, on top of a hyper-creative, kaleidoscopic instrumental canvas, is possibly the most necessary voice we need in hip hop right now. I certainly needed this as a young, queer rap fan when groups like Cannibal Ox and Company Flow were shaping similar sounds; and certainly DePaul brings in ideas like vaporwave, some slight trap influences, and plenty of nods to avant garde jazz, to bring their orchestral masterpiece to life. Maybe when the streets open back up, heads will put Acid Rain II in their headphones and commute through the rainy, city landscape like replikants on the back lot on the set of yet another Blade Runner cut we never got. Until then, there’s Acid Rain II, truly the entire Bad Apple Commune still pushing out new classics, lacing our hope with a healthy dose of paranoia, and our pessimism with the promise, wrapped in two to three minute burst of eclectic hip hop, of something a little more ideal, a little more utopian.