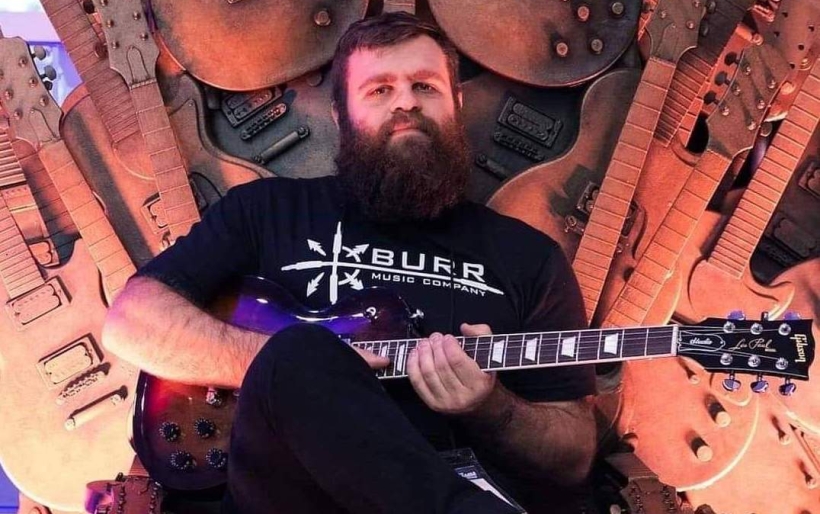 Perfecting the Sound of DIY: Evan Bernard’s approach in reimagining the small room

A dedicated player in the Philly DIY scene for years, Evan Bernard’s appeal is how he’s always choosing carefully.

As an engineer, he boasts an impressive roster including early Spirit of the Beehive records and recently, the enthusiastically received Soul Glo EP. When not recording, Bernard plays bass guitar in power pop groups No Thank Youand The Superweaks. He also recorded my band Teenage Halloween’s debut last fall. It was an honor and a luxury to work with him.

On recording day, Bernard lugged a leg of his set-up to the suburbs to capture reverb from a pre-war Steinway. He assembled the contraption in a bedroom. It followed a maze of wires into the living area to the piano while an old husky paced back and forth.

Before we started, Bernard stood in the kitchen with a grinder, fresh beans, and a French press. The press was so compact he had to grind beans several times for five of us to have coffees. We watched, drinking vegetable soup with our coats on.

What I admire most about him is he nurtures details like living, moving organisms. He didn’t settle for household Folgers out of presumption, but because some things in life have potential for improvement and personalization. When recording, he’s picky about who he collaborates with because he needs to believe in the art from the start.

That’s when I knew he was the real deal. It wasn’t photographic memory or memorizing a Dorian minor scale with a buzzer over his head. It was his trust in limited resources and still expecting the best.

Bernard was generous to offer some insight into his processes in a short interview.

The Key: Every music engineer is more attentive than the average person. You want to be able to hear that one sour note in a mix and that environment needs to be perfect. How does this translate to your workspace?

Evan Bernard: I’m in a transitional period since [Big] Mama’s [warehouse, the Fishtown space Bernard operated out of] is no longer. Right now, I’m working out of Second Street Music. My friend Kiley Cubicciotti owns it and has been renovating it over a few years.

The live room is framed; however, it’s unfinished. It sounds incredible though. I’ve never been happier with the drum sounds I can get. Walls are adorned with amplifiers, cabinets, electric organs, and pianos. Big glass windows look out into the city. The room is divided in two; the side we track drums and where bands play and a “production space;” a circle arranged with benches and tables carved from massive tree roots.

Most of quarantine I spent in the mix suite I built in my home. That room is wood-paneled with a desk overlooking the window. Sound paneling and curtains are accented blue. I’m surrounded by plants and guitars. It’s heaven on earth, with a permanent hint of sandalwood scent that’s comforting.

I’m upgrading a Stamchild 660 Compressor to the stereo version, which is a true-to-form version of the Fairchild 670 tube compressor, my favorite compression crayon. When it comes down to custom pedals, I like Cameltone Electronics (namely the Nard) built for the studio, some of which were designed to be played through a custom amp head built by my friend Mark Hurst. Both are on many recordings.

TK: Since you bought your French press for recording day, I was curious about your expectations with resources. Tell me about a cool DIY set-up.

EB: I love remote recording, and there were a few records I wired makeshift control and live rooms around the house. For the Earth Telephone record, we put guitar cabinets in closets and created baffles out of cushions and sheets to severely cut down bleed.

I also love capturing drums in a room. It helps create a space I imagine the music being played.

TK: And how about a favorite moment?

EB: It was recording the first Year of Glad EP. Mike Bell was drinking a beer while doing a vocal take and blew into the bottle that was in perfect pitch with the song. He held off drinking for a moment until we found the part to place the sound, and moments later it was tracked and written into pages of history.

Doing that record was pretty cool. It was the first time I recorded with Mike Harpring, who I revere as a human and musician. That session, Mike used a snare drum he made out of a steel pipe.

TK: What are the main ideas to capture when working with a band?

EB: The collaboration. It’s truly an honor to be trusted enough that somebody would let me take part in something as sacred as expressing themselves through music. My goal is to capture an artist distilled to their essence as purely as I can. I love the chase of creating the song from the ground up, the process of layering sounds and textures, and figuring out how it moves to confirm the message loud and clear.

I focus on what serves the song. How can I bring this to its fullest potential? No matter how much an idea sounds like it’s going to suck, you never know until you try.

Recording music is very vulnerable, and I want to make sure musicians know they’re in a safe space, supported in their endeavor to create. If the vibe is wrong, it’ll mar the record in that individual’s eyes forever. That is unforgivable.