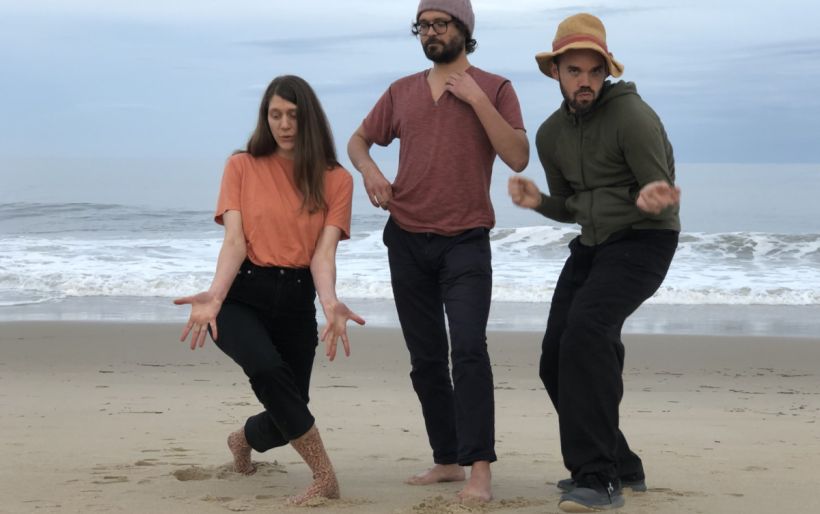 Sometimes I brim with optimism this time of year, even with so much to dread. Too Empty Coolers helped me escape my dread, and for that I have to thank Big Pal. The Philadelphia trio, consisting of Chrystine Rayburn, Doug Barber and Patrick Glennon, released this double album April 2nd on Dead Definition, and I heard it like a humble greeting for the spring, while I spent the week daydreaming of brighter skies and safer streets for American children.

The project speaks quietly, and its edges are rough like weeds. Tangling elegance and melancholy together with eccentric humor and unpretentious performances, the lo-fi pop experimenters tie puzzling instrumental patchworks to diaristic monologues whose meanings seem to keep disappearing over and over. The three intertwine their voices and keep the instrumentation thoroughly unpredictable, layering together overlapping lyrics with clarinets, modular synths, found recordings, tender acoustic guitars, and tumbling bundles of sampled drums. Some words are impossible to make out – like those delivered through a vocoder on the Kraftwerkian march “This Mortal Engine,” then on “1995” – while others run on and on in the sweetest way. “What we first thought was traffic noise became an endless arc of birds in flight outstretched beyond the coastline in a rare surprise,” Rayburn marvels on the single “Star Sword.”

The feeling of looking recurs, and it reminds me of sitting with the natural world: “I’ll never come close to describing its beauty,” I heard on “Heron,” before the claves came up clicking like cicadas. “Mothra” feels especially alive, opening with warm synthesizer tones, pulling me in while clarinets emerge at the pace of flowers blooming. “Sleepy Bruce I” brings me hissing fog at dusk, and “II” sounds like the sunset’s drifting off again. Between Rayburn’s subdued words on “Soup Human,” an older voice from a fuzzy recording remembers “trying to soak up the feeling of things living and growing,” which makes me think again about what human systems can learn from the non-human, and about caring for all creations as they come.

Some other time, I might hear the project like a meditation on machines (tractors, ladders, city busses, which live here too). And honestly, Big Pal were probably not thinking about spring when they recorded the project from last September to January. But last week, images of a green spring kept returning to me. And after the last 12 months of violence and detachment, the tape came to me like a soft promise of restoration to come – or, at least, to keep imagining.

Too Empty Cooler I and II follow Big Pal’s debut release I’m Already on the Gondola from May 2020, also on Philly’s Dead Definition. Outside the trio, Barber has contributed to a number of Seattle-based DIY projects on the god sags his pants label. Glennon and Rayburn also perform together as Lirra Skirra, who broke d(a(y))on Dead Definition in February 2020, and Glennon released his own album Two-Year Burn on the label in May.