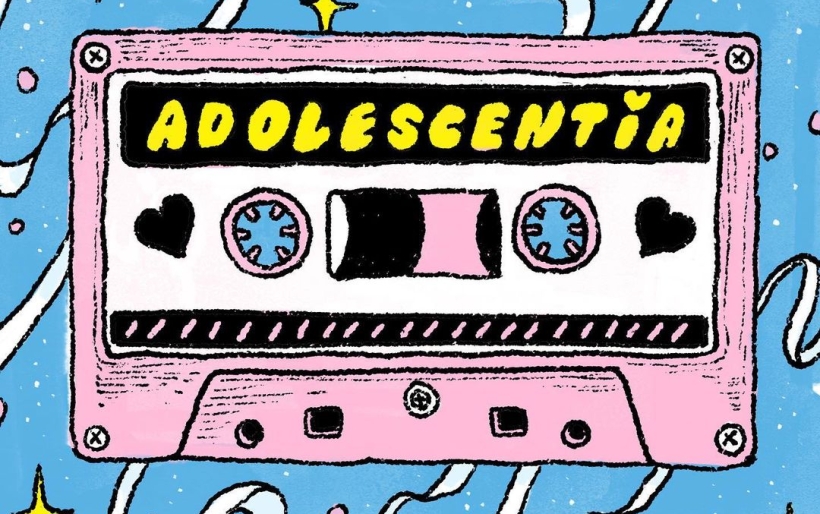 What album changed your life when you were 14 years old? That’s the question at the heart of The Adolescentia Project, a website and social media page that was started by friends and former Temple University classmates Mary Beth Ray and Carrie Teresa almost a year ago.

The answers to that query are, perhaps not surprisingly, extremely varied, ranging from Stadium Arcadium by Red Hot Chili Peppers to Chance the Rapper’s Acid Rap to Loveless by My Bloody Valentine. Along with the basic information the questionnaire also asks about context: what impact did this album have on the respondent, what impact it’s still having, and why it’s important to them. This serves as a type of interview, a conversation between the respondent and the audience but also between the respondent and their teenage self.

“I see The Adolescentia Project as a love letter to our 14-year-old-selves and the albums that we loved during that time,” Teresa told The Key. “Through our reflections, we revisit those uncertain, insecure kids during that transformative but perhaps also awkward and painful time to say, ‘Hey, who you were then was pretty cool, and who you are now is even cooler.’”

For Ray, 14 was around the age when music became an integral part of her life. She co-founded this project “in an attempt to create a living archive to document and celebrate these formative musical experiences. This is the music that gave us the courage to become who we are through the stress, uncertainty, and excitement of adolescence and beyond.”

So far Adolescentia has close to 50 submissions. Some of those people are musicians or self-described music nerds, but responses have also come in from more casual fans. One thing that is quite clear is that there is no right answer, and this is not the place for elitism, embarrassment, or guilty pleasures. As Ray explained: “If something has value to you, then it’s valuable. And if it was valuable at a time when you so very much needed it, that’s even more reason to be reverent and not at all ashamed.”

“I think that if the music you listened to when you were 14 gave you the courage to be who you are and empathize with people and see the world in a different way, then there’s nothing to be ashamed of,” Teresa concurred. “The idea of looking back and cringing at what’s ‘cool’ and what ‘sucks’ seems pretty pointless.”

Ray and Teresa met while in the Media and Communication PhD program at Temple University. While neither live in Philadelphia anymore – both in academia, the former teaches at Plymouth State University in New Hampshire and the latter at Niagara University in New York – they credit the years they spent in the city for having a huge effect on this project and their tastes in music as a whole.

According to Ray, “Philadelphia is tied to my musical history, and as I bring my musical history with me into this project, it can’t help but be influenced by it. I grew up outside of Philly and listened to all the incredible community and college radio stations like WKDU and WXPN. They acted as another type of essential musical companion throughout my adolescence.” She would eventually become a DJ on WKDU and play in numerous bands including Bedroom Problems, April Disaster, and The Fantastic Imagination.

Teresa also cited her time spent in Philly as having a huge impact on her musical background. She grew up on Long Island and moved here to go to school. She told The Key that “my exposure to culture, art, and music really expanded while I was there, as did the way I think about how those things influence how we relate to one another and ultimately define ourselves.”

Even outside of the founders’ background Adolescentia has a noticable Philly flavor, from the graphics drawn by local artist Rebecca Kirby to the numerous submissions from people who live or used to live here.

As one might expect when you get a couple of professors together to work on something, there is a certain amount of theory and research behind the project, specifically when it comes to the specific age they’re asking about. At 14, we are entering high school and with that entering into some semblance of adulthood. Ray referred to it as a “tender, intense, transitional time” that’s “in the middle of asserting our identity, figuring out who we are and who we want to be.” It can be a very scary, very weird, and very uncomfortable time.

One thread that runs through many of the submissions is how music and specifically the album being talked about served as a kind of security blanket, something that helped them survive those years. Or as Ray put it: “I don’t know what I would have done without the bands I loved keeping me company as I braved my way forward.”

For her, that album was Pirate Prude by Helium. She told The Key that while writing her entry “I couldn’t help but think of the dissonant, fuzzy guitars that acted as a wall around my awkward, nervous teenage self; the sound creating a safe space for me to exist.” There’s a certain ubiquitous nature to that feeling, even if every teenager thinks they’re the only one experiencing it. Substitute Limp Bizkit for Helium, or maybe Living Colour, Hole, Black Eyed Peas, or any of the many other bands that have been talked about as part of the project.

Teresa’s assertion that The Adolescentia Project is a “love letter to our 14-year-old-selves” feels even more poignant when you read her submission for Smashing Pumpkins’ Mellon Collie and the Infinite Sadness. In it she writes about finding solace not just with the album’s juxtaposition of “beauty and brutality” but with the band itself, specifically front person Billy Corgan: “Seemingly too large for the stage, stomping & lurching around with a guitar that always looked too small for his frame, amplified by a shaved head, crooked teeth, & an insistence on wearing long tunics & turtlenecks. I identified with his physical awkwardness, which I felt every day roaming the halls of school. I too seemed too big for my surroundings, & I was always trying to make myself shrink to the point of invisibility. Billy didn’t, and I admired that.”

This is clearly personal but those feelings of being an outsider, of not fitting in, are also something that is quite common for so many at that age. Music is a way for us to escape our realities, yes, but it’s also a way to find meaning in the world, to explore, to make friends, and to grow. This is something that was true at adolescence and is certainly true today. Ray told The Key that, “In a time of isolation and challenges, especially this past year, we can find community, connection, and commonality around these musical experiences.” The project, weaving together the stories of different people from different times and places – though from reading the entries, being 14 is just very universal – is testament to that.

To see more spotlights from The Adolescentia Project, or make your own submission, visit them on Instagram at @adolescentia_ or email adolescentiaproject@gmail.com.