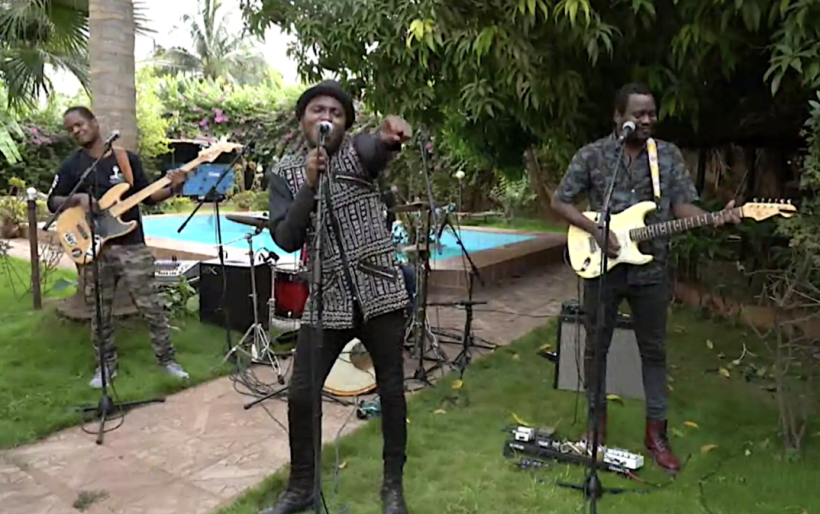 The band was playing “Al Hassidi Terei” from their 2015 album Music In Exile, and though it began breezy and contemplative, the tempo raised, and the temperature did too. By its peak, it’s hard to imagine that the virtual NON-COMM audience wasn’t jumping around in front of their device of choice.

“Hope some of you got a space there,” Touré said. “I know some of you are watching this from the kitchen, from the laundry room, from the office. Thanks for sharing this moment with us.”

The band’s livestream set was performed from their hometown of Bamako, Mali — “you’d be more than welcome to come down here if you want” — and mixed up fast beats and irresistible charisma with uplifting sentiments. “Worry,” in particular, from last year’s Optimisme, paired raw, distorted guitar licks with lyrics about struggling through hard times towards a more hopeful scene on the horizon: “Keep fighting today / That smile will come one day.”

The set had a lot of stylistic variety; much of it was rooted in the band’s Tuareg guitar rock leanings, but each song brought in different influences. We heard bright licks and positive melodies on the opening “Barre” and a Cramps-y punkabilly energy on the closing “Badala.” Their love for their home country was evident on the fervent ska-toned “Mali Nord,” and it’s a love that transcends the struggle the band went through, getting together during exile due to the civil war of 2011.

And that love translated to reaching Songhoy Blues’ audience around the world as well.

“We miss you so much,” Touré said. “Much more than much. It’s been more than a year we haven’t been on the road to play for you physically, but thank god for the internet. We are still together, you are in our heart and our soul, we will be together forever, whatever happens.”

Watch Songhoy Blues’ NON-COMM 2021 set below, and check out other performances from the festival here.