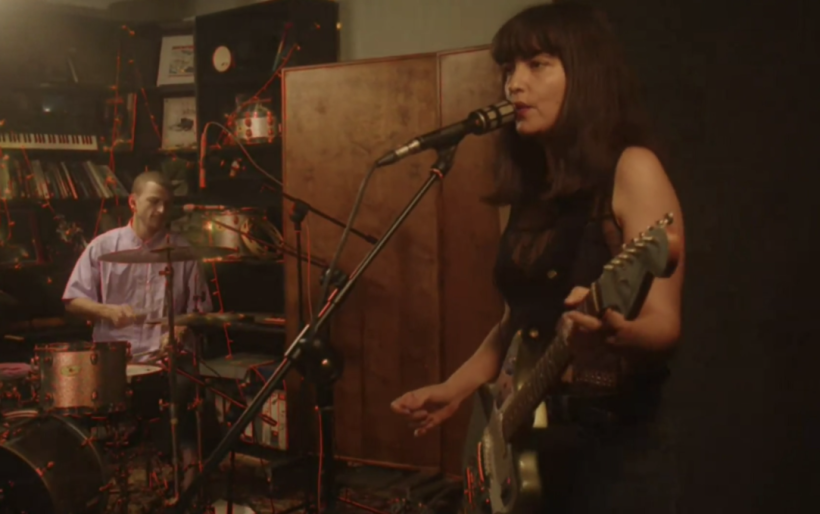 Tamar Aphek performed live from Tel Aviv, Israel for the first Free At Noon doubleheader of NON-COMM. An emerging player in the Israeli music scene, her debut full-length album All Bets Are Off, released in January 2021, is a knock-out punch — and so was her set.

Beginning with “Russian Winter,” Aphek lit the flame that later became an inferno. With a voice like a dagger, she sliced through the crashing percussion and guitar distortion. Still blazing on “Too Much Information,” she maintained deadly eye contact and unwavering intensity.

“Crossbow” was delivered with the same devastating accuracy. The noise stayed steady around her until suddenly she would tear through it. “Big Commotion” felt equally on-edge. One second she was perfectly stoic, as though waiting for a cocktail; the next, she would come slashing and slamming back into focus. This unrelenting aggression carried straight into “Bring It Up.” At first, the band flirted with restraint but quickly succumbed to their usual scuzz.

“Surprise Me” felt like Aphek ushering in the apocalypse. As she wailed on the guitar, the band broke into a jam session that resembled the end of the world. The ceiling seemed to be collapsing in, as a steely Aphek asserted, “nothing can surprise me now.”

Ending the set with “Into The Reel,” the song proved to be the final blow. Between Aphek’s frantic singing and the aggressive accompaniment, the song was merciless. When it finally got quiet, the silence felt disconcerting after the war that was just waged on stage.

Check out Tamar Aphek’s full set below and explore the rest of NON-COMM here.