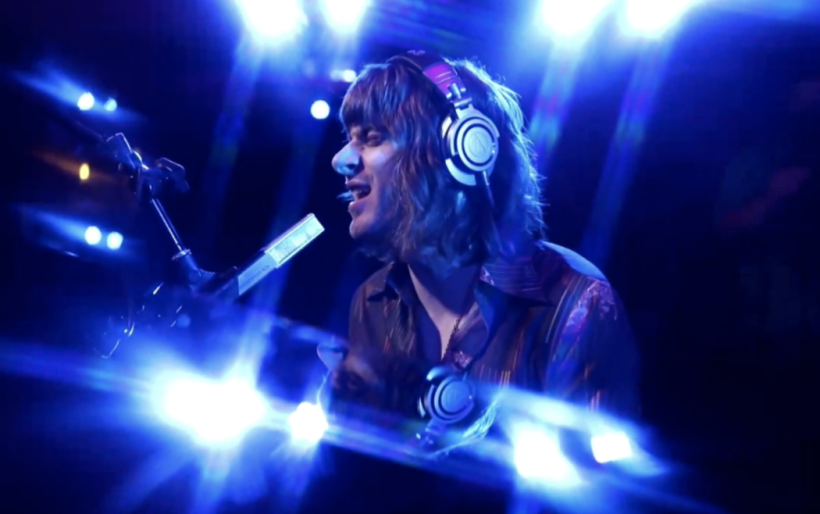 NON-COMM Recap: Neal Francis’ eclectic retro-pop is a vibrant start to the festivities

Practically the first image we saw of Neal Francis during his virtual NON-COMM set was the Chicago singer-songwriter seated at the piano, bathed in blue, the camera’s rack focus bending the light into radiant beams and cosmic starbursts. He looked remarkably Old Grey Whistle Test-ready, and sounded it too, playing a short set of songs that drew on London glam as handily as New Orleans boogie.

Situated in his hometown’s Shirk Studios, Francis played a set of songs from his new album, due out later on this year. The opening “Alameda Apartments” was a rambling bop that pitted Francis’ piano going head-to-head with synth-harpsichord playing and a killer rhythm foundation from his bandmates. A snare downbeat launched us straight into “Problems,” which took a spirited Philly soul turn, as the singer reflected on the mistakes of rough living.

This theme of struggle and self-improvement carried into “Can’t Stop The Rain,” and echoed Francis’ own story a bit — struggles with addiction and an alcohol-related seizure six years ago pushed him into sobriety, and furthered his creativity, and the song’s uplifting refrain echoed that: “You can’t stop the rain / it’s always coming down / it’s always gonna fall / but you’re not gonna drown,” propelling the song with a strong undercurrent of hope.

“We’re trying out some new stuff today,” Francis said between songs. “Hope you enjoy it.”

“Sentimental Garbage” was probably the most Dr. John of the bunch at its outset, with a rollicking yet pensive piano pairing with Francis’ contemplations on self-regard — “I must be vain because I look at my reflection all the time” and “I wish I love you, baby, the way I love myself.” The introspective song led to a Pink Floyd-ian coda, with Francis belting “sing me that sad sad song” as the song drove to a close.”

And “Changes, Pts. 1 & 2” did just that, opening on a note of a note of melancholy and exhaustion but also triumph: “I’m not living the way I did before,” he sang as the song built into a lively instrumental crescendo, with Francis joyously soloing and showing off his chops on both piano and whammy clavinet — and instrument native to his hometown’s Chicago Electric Piano Company.

Watch Neal Francis’ performance below, and be on the lookout for his single “Don’t Call Me No More,” out next month on Karma Chief Records. Check out more from NON-COMM 2021 here.