The Skeleton Key: May ends with a slew of outside events, new music from Mesh and HIRS, punk markets, Heavy Metal Parking Lot, and a World/Inferno remembrance - WXPN 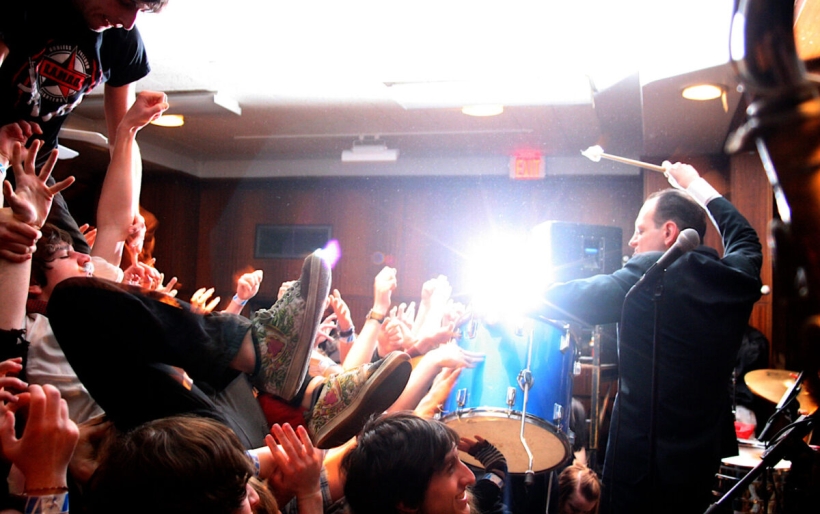 The Skeleton Key: May ends with a slew of outside events, new music from Mesh and HIRS, punk markets, Heavy Metal Parking Lot, and a World/Inferno remembrance

Sometimes you never know how good you have it until it’s gone.

I’m talking about the pandemic, sure, and that never-ending questioning we’re all going through trying to figure out what’s next and how to return to what we had before. But I’m also thinking about Jack Terricloth, the singer of Philly-favorite punk big band The World/Inferno Friendship Society who passed away this week at the age of 50. I’ve been seeing that group of misfits play for more than two decades – that’s half my life, in case you were curious – and it feels downright impossible to imagine a world without Jack and his music.

World/Inferno played what turned out to be the final Mischief Brew show. They played Pointless Fest, multiple times. They performed their Peter Lorre musical at World Cafe Live in 2007. Their shows at the First Unitarian Church were always, always legendary. Name a venue in Philly, from warehouse on up, and there’s a good chance that it hosted the band at some point over the past 25 years. They might have been born in New Jersey – Terricloth, real name Peter Ventantonio, started legendary New Brunswick punk act Sticks & Stones back in the late 80s – and based in Brooklyn but there was a lot of Philadelphia in World/Inferno.

That was literally the case with violinist Rebecca Schlappich Charles, who was living here when she was a member of the band before leaving us for Los Angeles and a spot with the always-awesome Mariachi El Bronx. Greg Daly, longtime driver and tour manager for World/Inferno, has been in Philly for so long you might forget he’s from New Jersey but when shows restart and you see him working at Union Transfer or the Church ask to see his BORN TO RUN tattoo cause it doesn’t get much more bona fide than that.

Speaking of shows, we should start going through the calendar cause there’s a lot to get to over the next couple weeks. First thing on my calendar is tonight with the latest in Fire Museum Presents’ 20th anniversary video series. While they can’t hold in–person events, which is a bummer, they have put together a ton of really wonderful programming to celebrate two decades of promoting jazz, avant-garde, and more. This episode features performances from saxophonist Andrew Bernstein of Baltimore’s Horse Lords and multimedia artist and multi–instrumentalist Lary 7. More information and a link to the video can be found here.

Tomorrow night in West Philly it’s the monthly Warp Factor 9 concert. Weather permitting there will be limited seating outside while the bands – a guitar duo of Sam Gasparre and Andy Pitcher and an ensemble made up of bassist Matt Engle, pianist Eric Corbo, violinist Veronica MJ, and Erik Ruin on visuals – play inside. You can also watch via Facebook. Also Thursday Kilamanzego will be performing a set on Twitch for the Bemis Center for Contemporary Arts Low End series and there’s avirtual fundraiser for Ars Nova Workshop celebrating Sun Ra Arkestra’s maestro Marshall Allen 97th birthday with performances from Yo La Tango, William Parker, and more.

Saturday afternoon the West Philly Orchestra are playing the Poor People’s Garden Party at 1505 W Allegheny and the next day a bunch of improv acts are part of the “Derivative Sessions Tennis Hang” at the Parkside courts by the Mann. In South Philly at Wharton Square Park that afternoon there’s an outdoor punk market with vendors including Come On Strong – who we wrote about in our piece on the USPS – Low Level, Here And Now Zines, and others.

That evening down in Cottage City, Maryland the aforementioned 97-year-old Marshall Allen will be playing a show with Luke Stewart, Knoel Scott, Heru Shabaka-Ra, and Tcheser Holmes. I looked it up and that’s only two hours away if anyone wants to go, though it will also be broadcast via Facebook.

Staying on that topic, the Philly Jazz Legacy Project is hosting a talk on Tuesday the 25th about Union Local 274 of the American Federation of Musicians, started in 1935 after Black musicians in the city were denied entry to Local 74. The presenter for the event, which will be held on Zoom, is Dr. Diane Turner, a Philadelphia historian who has done a ton of research on the union and its members.

That night is also the next in the Unprecedented Sessions, the collaboration between WXPN, Cherry-Veen Zine, and PowerCycle Productions. This one will feature KooF and Birdie Busch. You can read more about that in our preview over here.

This seems like a good spot to pause and talk about some of the new releases that have come out recently or will be released sometime before the end of the month. Let’s actually start off with this video from Birds of Maya, who as we talked about last month is putting out a new one at the end of June. “Please Come In” is an absolute ripper, which is the least surprising thing I’ll say in this whole column. Check it out:

I have been waiting for this tape to come out for a year and a half – seriously, I wrote about the band in our year-end coverage for 2019 – and I am so absolutely stoked for it to finally be out. Mesh plays bouncy, weird, fun garage punk stuff and it bums me out they’ve only gotten to play two shows in two years. Hoping that changes soon but in the meantime I’m happy to have this album to listen to over and over again.

Just like the rest of us, Lira Landes from local minimal synth act Plastic Ivy has been trying her best to stay busy during the pandemic. Back in January she played a livestream and the recording of that studio performance is now being released as a cassette and VHS tape by Miami label Noir Age. If you’re a fan of ambient music or just synths in general this, like everything Plastic Ivy has done, is a must-have.

The HIRS Collective – The Third 100 Songs

Sure the new HIRS collection The Third 100 Songs won’t be out until next month but the grind band has been posting all these teases and I would be remiss not to mention them cause it’s all so good. The latest track they dropped is called “Affection & Care” and it is a total banger. More on that soon, I’m sure!

As far as archive stuff goes – aka the regular part of the column where I talk about what Freedom Has No Bounds has recently dug up – the most exciting thing out there is the long-lost Initial attack demo tape from the early 80s. That was one of the bands a few people told me was missing from my Philly no wave article last month and my response to them was, “That’s great but I’ve never heard them, I’m pretty sure I’ve never seen a picture of their demo tape much less the real thing, and as far as I know none of those songs are even on the internet!” I also have to explain that I’m only 41 and no, I was not going to shows in the early 80s.

Now, thanks to the combined efforts of band member Valerie Opielski and Mike Eidle of Freedom Has No Bounds, the tape is finally online. This is the real deal and needs to be heard and I’m so happy that there are people ready to do the work needed to bring some of these artifacts out of obscurity.

I also wanted to quickly highlight the Palberta submission to NPR’s Tiny Desk Contest not just because it’s great – duh, it’s great – but this is probably the first time a band on NPR has performed “from a Philly basement” and that’s awesome. While you’re on the site be sure to check out the one experimental music mavens Negativland just did cause it too is quite fantastic.

Alright! I have a few more dates to get through so let’s get started: on Wednesday May 26th Laurel Hill Cemetery is hosting a walking tour focusing on the graves of famous and not-so-famous actors and other people connected to the movies buried there. I know it’s not totally music-related but I’m just happy about all these outdoor events going on and wanted to share. While nothing is 100 percent safe, these sorts of things feel like a good way to slowly ease out of quarantine as more and more people get vaccinated.

Friday night it’s the return of Secret Cinema’s Jay Schwartz to the DJ booth after more than a year. He’ll be joining D.J. Silvia outside at The International for a night they’re calling “Worldwide Sixties Discotheque.” Staying in that part of the city, the following day at Liberty Lands Park the Poptart Punk Opera are presenting “Non Motus” by Marc Hoffeditz, a 30 minute piece about existential crises and being stuck in traffic.

Sunday up at Foto Club there’s an outdoor punk market featuring artists, records, clothes, and more. Finally the last event on my calendar is an online screening of the cult classic documentary Heavy Metal Parking Lot about the tailgating scene outside of a Judas Priest show in 1986. The event is being hosted by the Found Footage Festival and will include a Q&A with the directors John Heyn and Jeff Krulik, a reunion of some of the stars from the movie, a showing of the followup film Neil Diamond Parking Lot, and more.

That is it for May! Before I end this I wanted to mention the fundraiser for FDR Skatepark, which was damaged in a fire last week. FDR is a cultural institution here in Philly, even for those of us who don’t skate. It’s a fun place to see a show and hang out and should always be supported. I took this picture at a show there almost a decade ago:

I will see all of you next month. Please keep wearing your mask when you’re in close proximity to others, get your vaccine if you haven’t yet, and stay safe. And as always, if you have any hot tips you can reach me via Twitter at @talkofthetizzy.