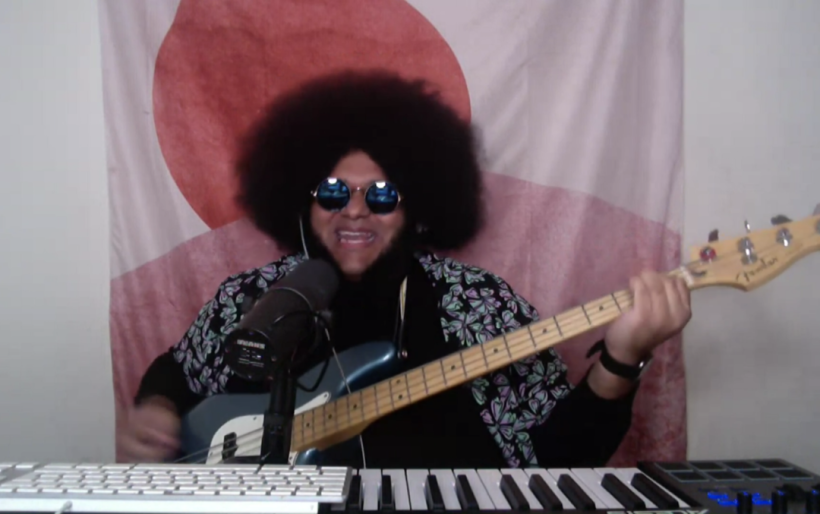 One person, one synthesizer, one Bluetooth keyboard; a pink and white backdrop, a bass named Salvatore, a slick pair of shades. These were the components to Dylan Cartlidge‘s Free at Noon performance, and though it doesn’t sound like much on paper, the energy the UK artist brought the the livestream set could barely be contained.

Backed by pummeling electronic beats and funky instrumentation, Cartlidge’s vibe was very much in the vein of The Streets, Gorillaz, or turn-of-the-millennium Beck: a shimmering eclectic grab bag, but very much under the umbrella of rap culture.

“I consider myself an alternative hip-hop artist,” he said by way of explanation mid-set. “I play a few instruments and bits and bobs but I’m rapper first and foremost.”

He’s also a storyteller and scene-setter, and his introductory explanations of each song were, in some cases, longer than the songs themselves. The themes seemed to center around the balance between dreams and self-conscious insecurity, and the music functioned as a motivational pep talk in a lot of ways.

“It’s about when you’re in some lower moments and can’t quite find the person who made all these ambitious promises when you set goals in your life,” he said, explaining the opening “Cheerleader.” “It’s about recapturing that .”

Later, on the introduction to “Molasses,” Cartlidge talked about pandemic ennui and the creative block it built up around him. “I didn’t leave the house for seven months, I’m here in my room. It was a really difficult time for me personally, and I really struggled to find myself creatively, but I ended up writing an album and it’s a little bit about what’s been going on.”

“Yellow Brick Road” was another song about his creative journey, and setting it up, he detailed his time working at a bar, and later at a call center — where quality assurance managers would listen in on his conversations with customers and pop on the line immediately after. “I had to leave that job and try my best to be a musician full time,” Cartlidge said. “It’s about having one foot in reality, one foot in dreams and expectations… [and] the crazy times in life where dreams meet reality. You’re going to studio to write a song, not knowing whether it’s start of [new] career or the end of what I’m doing…and then you go back to bar.”

Summing his kinetic set up big bang closing pop anthem “Anything Could Happen,” Cartlidge spoke about how his creative ethos is hope above adversity, and how music has helped him get through traumatic periods of his childhood and youth.

“Music has been such a saving thing for me on so many levels,” he said. “What I try to do in my music is bring a bit of positivity. If you got dreams and you aren’t chasing them, go ahead and chase them, you’ve got nothing to lose.”