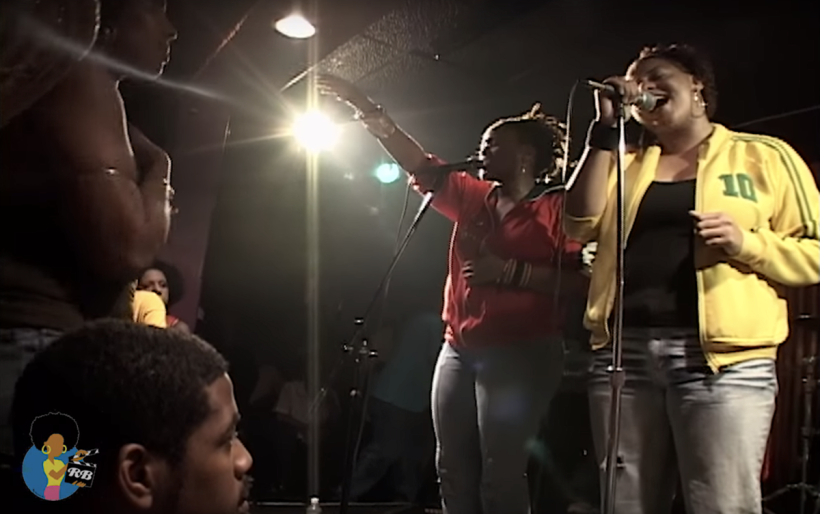 Floetry performs at Black LIly in 2002 | still from video

Black Music City is a collaboration between WXPN, WRTI, and REC Philly celebrating Philadelphia’s Black music history and looking to its future with a series of grant-funded projects. This month on The Key, we’ll be highlighting several Black Music City grantees, beginning with writer and podcaster Stanley Collins.

When he was attending graduate school at Temple University, Philadelphia’s Stanley Collins was also immersed in the local music scene. A life-long Philadelphian and passionate Philly music lover, Collins began to draw connections between the lessons he was learning in academia and the deeper underpinnings of the music he kicked back to after classes were done.

Five years ago, he launched the website 808s and Jazz Breaks, exploring the local scene through photographs, reviews, essays and more. This year, he takes a deeper dive into examining the history and future of Philadelphia music through the lens of Black Lily, the legendary femme-forward concert showcase and open mic series that ran from 2000 to 2005 and proved to be a launch pad for music careers by Jill Scott, Floetry, Kindred The Family Soul and many others.

The Seeds Of Black Lily is a podcast documentary that Collins is producing with a grant from the Black Music City initiative that will approach Black Lily from numerous angles — and conversely, will use Black Lily as a jumping-off point into broader conversations about culture in Philly, from media to politics and beyond. Collins will talk to artists, as well as promoters, and professors who have written about the scene, bringing his scholarly background to the table — he has a Master’s degree in sociology, and is currently pursuing his PhD in sociology at Temple University, where he also teaches undergraduate classes. (Collins just wrapped up a semester teaching Gender in America, where he works music and pop cultural references into conversation about, for example, presentations of Black masculinity; he tells us his dissertation will look at concert venues in Philadelphia, particularly examining issues around neighborhood change and gentrification.)

Collins and I spoke over Zoom this week about the Podcast, which releases its first episode on Monday, June 21st. Read our conversation below, and listen to a trailer for The Seeds of Black Lily as well. This interview has been edited for length and clarity.

Stanley Collins: I’ve been writing about music for my own personal blog, 808s and Jazz Breaks, which effectively started out of me going to a lot of concerts and having this itch post-concert to talk about it. I did a lot of concert reviews, when concerts were happening regularly — a lot of the stuff would be at World Cafe Live — and kind of tried to get this pulse of live music in the city, and writing about albums as well.

I started it about five years ago, when I was in my first graduate program. I was studying sociology and was reading a lot of interesting things around race and culture and history. I’d been playing guitar since I was in high school, so I had this experience and practice of learning and doing guitar and playing around the city, and then experiencing school. So I was trying to meld these two worlds, where I was learning about all these different theories and historical practices and ideologies around music and culture and race, and trying to tie them together.

So 808s and Jazz Breaks is the result of those two worlds: growing up and playing guitar, but also being very interested in the historical context in which sound and music is produced.

TK: Your Black Music City grant has you producing a podcast documentary about the Black Lily concert series in Philadelphia in the late 90s and early 00s. What was your first exposure to Black Lily; did you ever get to go to it back in the day?

SC: No, I completely missed it. When it was in its heyday, I was like ten. [laughs] I missed it, but one of the things that drew me to Black Lily — I mentioned growing up and playing guitar, and a lot of the musicians in the city I looked up to kind of came through that circuit during that time period. I always felt this spiritual / emotional connection to it, even though I’d never been. But I guess my exposure was in a lot of ways YouTube, too; watching old clips of people like Jazmine Sullivan, or Floetry performing. So, there was no direct connection, I didn’t go, but I still feel like the time had such an impact you felt it years after with a lot of those musicians I looked up to.

TK: A lot of times when you’re in a moment like that, people don’t realize. But I feel like people were somewhat conscious of how unique and special Black Lily was, while it was going on. Do you think so too, from the folks you’ve spoken to?

SC: Yeah, and I’ve talked to a few of the people who were involved, like The Jazzyfatnastees. Which was an incredible experience, since they were the ones who spearheaded all of this. But also people like D. Ryva Parker, who was the host of Black Lily. And another person, Mike D, who’s a filmmaker, and he was effectively the videographer of Black Lily. This was pre-cell phone, so pretty much any footage you see of Black Lily was from Mike. And all of them, they all seem like it was a collective environment of “I’m trying to help the next person,” that I think people did recognize as being special. But now being 21 years post its launch…that’s kind of its theme, the reason I’m calling it The Seeds of Black Lily. Everything they did was so great, and monumental, but there’s also this idea of planting a seed that you see the results of later. So I think that’s the second part to it.

TK: When it came tie to produce the doc, what inspired you to use Black Lily as the lens to look at the different areas you’re exploring with Philly music history?

TK: I felt a deep connection to a lot of the artists that came through, and still feel a deep connection. Jill Scott, Bilal, Jaguar Wright, Kindred the Family Soul, Lady Alma. All these artists. Something I realized while doing this is that Black Lily is kind of a metaphor for that time period, it has so many different interconnected parts. What I hope will be shown in the documentary, there are so many different layers, things that can be drawn and extracted from this Black Lily time period and experience.

For example, there will be an episode on media in the late 90s and early 2000s. So looking at Tiffany Bacon’s radio show Inner City. And also, the birth of Okayplayer. I got a chance to talk with Angela Nissel, who co-founded Okayplayer with Questlove, literally out of his bedroom in West Philly. You know, it’s 1999, and he had a very primitive computer setup. So The Roots go on the road, and Angela Nissel is literally running the website, she’s running the message boards. But she is also very involved with that community of artists, and Tiffany Bacon as well. It’s but one example of how Black Lily was connected to and interconnected with these different areas. Again, it’s a metaphor for this time period.

TK: Another way you’re using Black Lily as a jumping off point is the first episode, where you have Dr. Claudrina Harrold setting the stage and talking about the historical context, going all the way back to the 60s and 70s with Philly soul, Philly International, Gamble and Huff, but also particularly the politics of music in Philly, and Black music in Philly in particular. Examples being the Ship Ahoy record by the O’Jays or the way music in Philly intertwined with the Black Power movement. I think that speaks to what you were saying in the beginning about having an interest in history, and an interest in music, and looking at the ways they intertwine. Can you talk about the importance of looking at music, not purely through a pop cultural lens, but also a broader cultural / political lens as well?

SC: Absolutely. A question I’m constantly asking myself when I’m writing and editing is “how does place produce sound? How does history produce sound?” One of the things I was interested in doing when I stared this is taking with artists as much as talking with professors who have written about this and have this really grand and rich knowledge of historical context.

So for example, yes, Dr. Claudrina Harrold, it really worked out because she was in Philly, a student at Temple and an undergrad in the 90s. So she kind of had this connection to the city in that way, but also this really rich knowledge of history, and Philadlephia’s Black history in particular. So one of the things I wanted to do in talking to her — and someone I talk to in episode two, Dr. Phillip Lamar Cunningham, he wrote about the history of neo-soul, where the name comes from, and why it becomes a point of contention for some of the artists — what I wanted to hopefully get across with those two is again the historical precedent that produces sound.

So when you look at Philadelphia, its long history of soul music and Black music traditions in general, there’s also a really rich history of gospel music. And that all starts to make sense when we look at the late 90s and early 2000s. A lot of the musicians and artists who are making these records, are literally going from church rehearsal to Black Lily. So you look at someone like James Poyser, or Keith Pelzer, or Dre & Vidal. These are all like the children of pastors, or they all played at church in different choirs. So it helps build a bridge between historical context and sonic context.

The Seeds of Black Lily debuts on Monday, June 21st; subscribe to the series here.