Get to know Sacred Monsters, the Philly band who's never met - WXPN 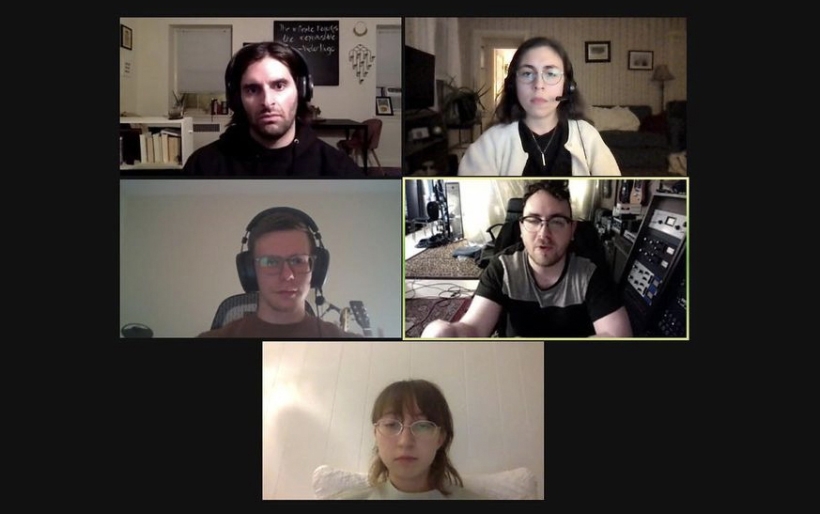 “It’s pretty wild, when I think back on it,” says Kathleen Poliski of the new Philadelphia indie rock band Sacred Monsters. “We’ve never met. We’ve never been in the same room together. We’re meeting for the first time on Saturday.”

Making music in general during the past year of self isolation and social distancing is a challenge in itself; starting a new project remotely with complete strangers is another thing entirely.

Six months into the Coronavirus pandemic, Poliski was feeling a lot of feelings that she needed to channel into music. After kicking around in various Philly projects in the before times, she was looking to truly collaborate; she’d been trying out ideas on her Sixty Second Songs Instagram, and she felt like some of those could be fleshed out into full-band jams.

Also, she just wanted to enjoy herself and the creative process again. So in November, she turned to Craigslist. “I posted this very specific thing that my goal is to record music, play shows when we get to the end of COVID and it’s safe, and have fun,” Poliski tells me over a Zoom call. “I’ve never gotten this far with a band before. The fact that we’ve recorded a five-song EP makes me so happy.”

Drummer Nick Cervini was the first person Poliski connected with, followed by keyboardist and vocalist Kelly Vinett. Guitarist Joey Franko signed on to round out the quartet, with Poliski playing bass and singing lead. They began hashing out their debut single, “Bones.”

A catchy three minutes of fluid post-millennial modern rock in the vein of Charly Bliss, Sunflower Bean, and Palehound, the song was assembled piece by piece using Google Drive. Poliski uploaded the initial sketch of the idea; Franko recorded a guitar lead, which Cervini added drums to, followed by keys and harmonies by Vinett. The stems were then mixed by producer and singer-songwriter Jesse Gimbel into the debut single the band released last month.

The rest of the project came together in a similar fashion, with regular Zoom meetings to exchange ideas and brainstorm, and Poliski says that it’s a method she found she actually prefers. Hashing out arrangements and instrumental leads in a noisy practice room is frustrating; having the space to refine your part on your own, in the privacy of your home, before presenting it to your bandmates is a much more agreeable experience, and makes for stronger songs in the end. She hopes to continue the process now that the Bones EP is out in the world today.

The band has still not played live, or even practiced. They meet in-person for the first time tomorrow to toast the release of their EP and pose for a photo shoot in Magnet‘s Isolation Drills series. Poliski knew from the jump that attempting a band rehearsal on Zoom would be an exercise in chaos. But at the same time, she’s grateful to Vinett, Franko, and Cervini for being willing to go on this journey with her. “With the pandemic, we were thinking ‘oh, in a couple months, it’s gotta be better,'” she laughs. “We didn’t know when that end really was, and it’s awesome: I found musicians that were like ‘we don’t know when we’re going to play together, but let’s do it!'”

For other budding Philly musicians who are wrestling with creating in isolation — or creating in general, once we’re on the other side of COVID — she is a big advocate for the route Sacred Monsters took.

“If anyone’s out there like ‘I don’t even know where to begin,’ I love Craigslist for finding musicians, and I can’t recommend collabing remotely enough,” says Poliski. “Just do it! You’re going to find somebody. It may not be on the first round, but there’s musicians out there if you’re very specific with what you want.”