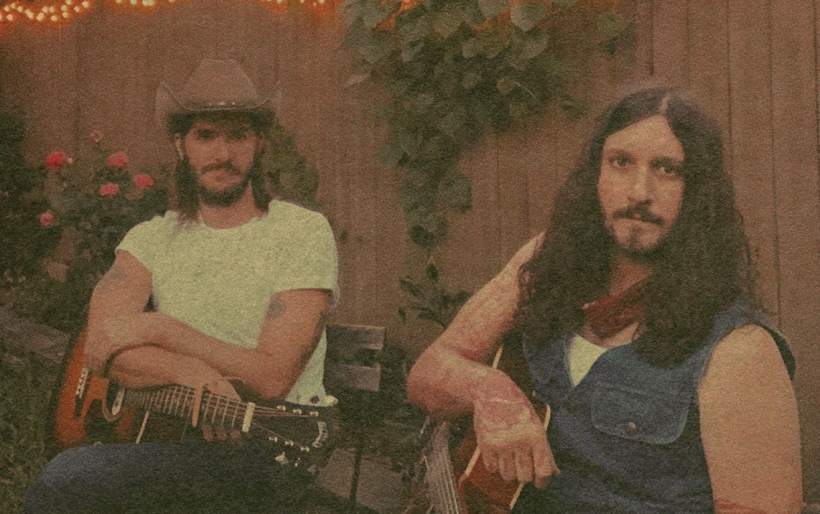 Hey Slow‘s “The Other Side” is a front porch-imagistic track completely perfect for the sweltering weather on the horizon. 2020’s debut EP, Yosemite, was a solo effort from the band’s Zachary Humenik, but this first look at 2021’s follow-up album is much more expansive.

Humenik’s bandmate Zach Thomas (of High Reeper) wrote the new song “The Other Side,” and the recording features James Everhart of Cosmic Guilt and Scantron on guitar, Sam Nobles on bass, Josh Friedman on drums, and pedal steel player Zena Kay (the live configuration of Hey Slow also features Brian Bruce of Tangled Up).

Humenik’s apparent Western influences stem from Gram Parsons, CSNY, and The Grateful Dead, and right from the start, “The Other Side” pulls you in with its bright and languid guitar riffs that feel reminiscent of early morning sunrises where there’s nothing that sounds better than sitting with that moment. Lyrically, the song illustrates that museum-like effect where the night before spills over into the morning after and you can pinpoint the evidence of a life lived. “Velvet couches soaked in cigarette smoke / tequila left out on the kitchen table / record player skipped until the morning” is such a visceral line that describes the most ideal-sounding summer evening. The dueted vocals drip with a carelessness that reinforces the line “It’s alright, I’m on the other side.”Whatever happened the night before doesn’t matter, because today is presently beautiful.

“The Other Side” is undeniably fun, lazy country rock, and the dramatic shift in tonal direction from Yosemite’s sort of indie-Americana akin to groups like Lord Huron feels like an appropriate change of pace. With players from other Philly country outfits, the setup is exactly right for a release that plays up outlaw rock and roll or melancholic, twang-infused contemplative ballads.

Hey Slow played an Unprecedented Session back in April at The International, presented by WXPN, Power Cycle Productions, and Cherry Veen Zine, where they debute tracks “Western Approaches,” “Blood Moon,” “Morning Hours of Gold,” “Echo in the Canyon,” and “Dead Guy Walkin’.” They’ll open the show at Ali Awan’s EP release party at Sunflower Philly on June 18th; a limited number of additional tickets have been released to the previously sold out show information on that event can be found here. Listen to “The Other Side” below.