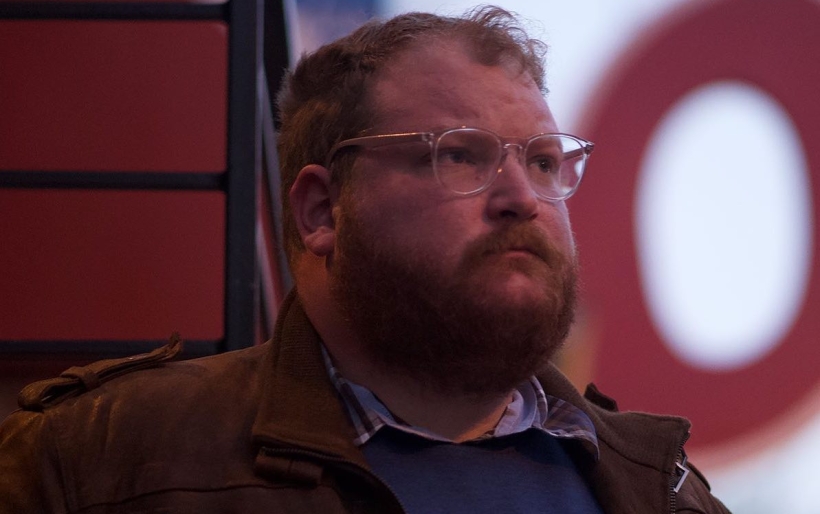 This February, from the depths of the pandemic, Philly singer-songwriter Sean Danger Smith released an earnest, anthemic song about falling in love in the simpler before times.

“City Wide / We Met At Ortlieb’s” made its debut on the Philly Loves You holiday compilation, and its yearning, uplifting alt-roots tones channeled stars like Marcus Mumford and Nathaniel Rateliff as Smith described a fervent romance forged over Pabst and Beam, cocktail napkin sketches, and late nights.

The song was the first taste we got of Sad Disco, Smith’s second album for local label Spring Garden Records — the record label based at Community College of Philadelphia that’s also released work by local faves Arthur Thomas and the Funkitorium, and has developed something of a community of creators on the west end of Callowhill. Working with staff and students, Smith developed a robust, dynamic presentation of his songwriting, following a mostly stripped-down debut record from a couple years back. Sad Disco sounds big, but it’s also incredibly tight, and many songs land under the two-minute mark while still sounding fully realized.

Smith plays live from Ortlieb’s (appropriately enough) for this Friday’s virtual Free at Noon concert, the day of the album’s release. That night, he plays a release party at the venue. Leading up to both, he caught up with The Key for a short interview about his journey to this point.

The Key: XPN listeners met you this year with the “City Wide / We Met At Ortlieb’s” single. What was your background prior to that?

Sean Danger Smith: I’m from South Jersey, I went to High School in Philadelphia. I started studying music in New Orleans for three semesters at Loyola New Orleans. Had a band there, we were called Easy Bake Oven – EBO for short – and then I had to move back home for some medical reasons, so I started playing out in Philly while I was studying undergrad at St. Joes. I got really connected with the scene, and even just around there I would go to The Grape Room, I was heavily involved in St. Joes’ 1851 Productions, lots of open mics, and getting more and more connected.  I love the Ortlieb’s vibe and Johnny Brenda’s and those spots, it was a dream to be able to play those places.

TK: The new record and your debut were made through Spring Garden Records, a label out of the Community College of Philadelphia. Can you talk about your perspective on the label and studio and the scene surrounding it?

SDS: It’s great! Paul [“Starkey” Geissinger] is the main head of the label, who will actually be playing bass during the Free at Noon, and during the show that night. I was introduced to Paul, and all those professors there – also Norm [Green], who’s involved with the Funkitorium – is just a great group of guys. I kind of which I’d gotten my associates degree there, if I’d have known better when I was younger. It’s a sort of small community, Nate [“Zavetis” Savoth], the guitar player for the Funkitorium, engineered most of the record. So we did that all during quarantine, was the Sad Disco recordings. It kind of took on a life of its own, it’s great working with those guys, and they all have their separate parts. We’re really a tight family, there’s events we throw for the school, I’ve met the president [of CCP] multiple times. It’s a great group of people to work with.

SDS: Well, the experiences I have in the song – “you drew my face on a napkin when we met” – it’s pure nostalgia for that. Obviously it took place before, but its’ a love song for Ortlieb’s as well as the person I’m mentioning.

TK: Does it hit different now that we’re able to go back to Ortlieb’s and have those experiences in person now?

SDS: I have not been back for a drink yet there. Since Quarantine, I’ve moved to closer down the shore in Sea Isle, I’ve been working there. I go back to Philly for rehearsal and to record, but it’s tough to get there, that’s why I’m looking forward to Friday so much. To actually be inside there, and buy a few people City Wides who deserve them.

TK: One of the things about Sad Disco as a whole was the arrangements; they’re really beautiful, they move in unexpected directions. For me, it feels a step up from the earlier project you release. How did that sonic texture develop?

SDS: Yeah, for sure. It was a progression towards having the drums, bass, and other instruments involved. It was something I didn’t want to do on the first record but definitely needed on the second one. I was kind of intimidated by throwing something together with guitar and bass. Who’m I going to have play? I’m excited how it worked out, I’m kind of stoked that I could do that. I didn’t know I had that capability.

TK: Were all the arrangements done by you, or somebody from the production side. Or was it more collaborative?

SDS: It varied from song to song. I had a bunch of different musicians play on it, including my friend who recently passed, my friend Major [Van Winkle]. It’s nice to have him on tape. But he plays on the record, on “Heartstrings” and “Youth,” and it was very collaborative but I always heard the songs sounding that way.

TK: With the exception of “Scared,” all the songs are very compact. They’re between one and a half to three minutes. What do you like about writing short form like that?

SDS: I love writing a quick pop song. Not that pop should be that short always, but for my style, when I write a song, I kind of hate second verses most of the time and force myself to write them, but I like short, sweet, and to be able to play with the dynamic of “oh, the chorus definitely sounds different from the pre-chorus or bridge.” And get it all out there very quickly, that way people can just enjoy it and listen to the next thing. And even the lyrics themselves, I’m very inspired by Bon Iver, I kind of want the words to sound better than the meaning, and I want the words to sound pretty.

TK: You’ve got a song about Ortlieb’s, you’re playing your Free at Noon and your album release party there. What does Ortlieb’s mean to you?

SDS: It’s karaoke night with some of the best musicians in Philly. If you’ve ever seen Joey DeMarco from Sixteen Jackies play karaoke there, it’s just the greatest time of my life. It means friends, all the bartenders are really sweet and can make me laugh the whole time. And I’ve also dreamed to be able to play there, I’ve seen some crazy shows there. You can see some amazing acts for very cheap.

Sean Danger Smith plays Free at Noon this Friday, June 18th; watch live via NPR Music Live Sessions, and get information about his release party that night at Ortlieb’s here.