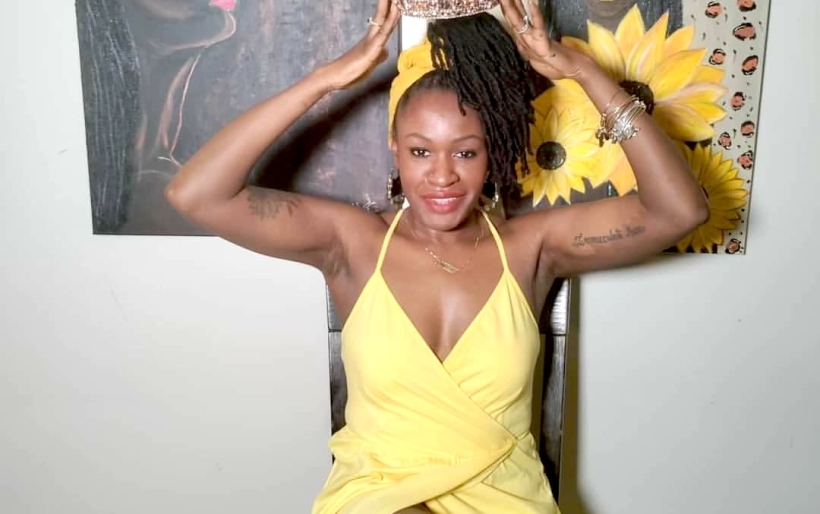 Welcome To The Locals: Lady Sarkazym

Philly is known for being the home of some of the elite rappers who are deadly with words when behind a microphone and the spoken word artists are no different. The wordplay and gritty delivery allows them to catch the ears and attention of a crowd in a park or local hood bar.

Lady Sarkazym is the perfect of example of how deadly a poet from Philly can be with a pen and pad. It’s the reason why she’s made a name for herself in her hometown’s spoken word community at events like Dowling’s Palace in North Philly or Pecola Breedlove and the Freedom Party in West. While many respect her game, it’s the content of her poetry that sticks with many of her listeners, especially with her new project Dear Lost Jawn.

I’ve been a fan of Lady Sarkazym for the past 10 years. Not only because her style let me know that it was okay to approach spoken word with a hip-hop influenced background, but it was because her poetry is always based on accountability. Like many of her pieces, Dear Lost Jawn consist of seven tracks that remind women, especially Black women, of how beautiful they are and that they’re too powerful to allow anyone to have a hold on them, while at the same time keeping it real with them. As a goddess MC she refuses to play the role of a victim in her poetry and is cool with keeping it real with people with her words even if it causes her to lose a listener or two.

I was recently able to talk with Lady Sarkazym about how Def Poetry Jam influenced her style, her new project Dear Lost Jawn and why accountability is so important to her when it comes to her writing.

Listen to our conversation and read excerpts from it below, and pick up Dear Lost Jawnhere, care of Griot Soul Records.

Welcome To The Locals – Lady Sarkazym

I wanted to be a rapper, but I sucked. I was this quiet little thing in high school, 103 pounds, all hair. My brother and my cousin [were into hip-hop] and I used to get their books, and read their rhymes. But it didn’t work out. [laughs] So when I first saw Def Poetry — Black Ice, and Shihan the Poet — Shihan was writing about love, but was doing it in such a cute, funny way, that I was like “I can do that!” And their feel felt more like hip-hop to me, so I’m like “I can do what they’re doing.” I didn’t see to many women do it, so I followed these dudes. I would be as hard as these dudes at poetry! And I’ve always done well in the bar scene. People who were like “I don’t really like poetry, but I like what you do.”

…on finding a balance in poetry between uplifting women and keeping it real with them.

It’s conversations with my girlfriends. I’m that friend — don’t come to me if you don’t want me to tell you the truth. And I’ve lost a couple friends. I’ll lose a friend, but they’ll come back like “you was right.” But yeah, it’s accountability. I believe so strongly in accountability. After you go through so many things…I’ll be 43 this year, I’ve been married for seven years, and I’ve learned that if you can’t hold yourself accountable in your own relationships, if you’re always the victim, you will never grow. And I know so many people — myself included! — who have done it in the past, and I’m pretty sure I still do it in some instances now.

…on the impact of “cancel culture” on art.

Comedians can’t say a lot of the same stuff they got away with saying. And some of it, of course, is valid. But with poetry, a lot of it…I mean, slam poetry is basically won from being a victim, I feel like. There’s a lot of poems I heard I thought sucked, but they got sympathy points.

…on the positive reception she’s received outside Philly.

I just love Baltimore. I get so much love in Baltimore. I met [my husband] E [the Poet Emcee] at The Clef Club, but our first kind of date was us going to Baltimore, and Be Free Fridays was going. Baltimore and DC was always a very different vibe for me. When me and Ms. Wise would go to DC, and we try to sell a CD for $7, they automatically give you $10. “We were trying to keep it low!” “Uh-uh, girl, take this $10, stop playin’.”

…on which poem from Dear Lost Jawn has a message her younger self would have benefited from the most.

“Expiration of a Good Girl” had always been my favorite one because I feel like when I was younger, I put too much of things on myself. When certain things went wrong in a relationship, it gotta be me. I must be doing something terribly wrong, so I would be the victim all the time, or I would go too much one way or the other — I would be the victim, or this other person would be a victim, it’s not just a relationship that doesn’t happen to be working between two people. I really think people can go too hard on one side or the other instead of coming together.