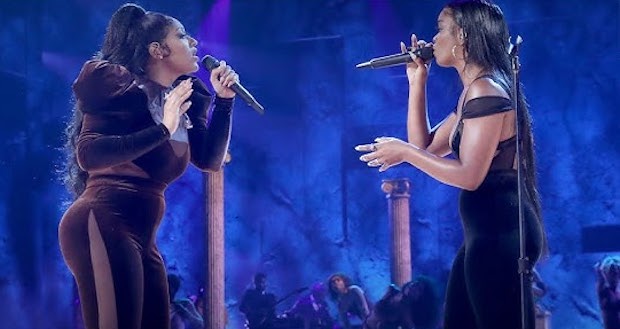 Jazmine Sullivan and Ari Lennox | still from video via BET

Watch Jazmine Sullivan perform her new single “Tragic” and “On It” at the BET Awards with Rep. Maxine Waters and Ari Lennox

Jazmine Sullivan is here to remind you to raise your standards with her new track, “Tragic.” Refusing to reply to the 2 a.m. “you up?” text, the Philly singer-songwriter has no problem pushing people to the side who aren’t worthy of her time. She gave a powerful performance of the track at the BET Awards on June 27. The first release since her album, Heaux Tales, which came out earlier this year, the single maintains the same sex positivity and brutal honesty.

An instant dose of empowerment, Sullivan makes it clear she doesn’t tolerate the typical nonsense of the what are we stage. Revolving around the phrase “reclaiming my time,” she details disappointing hook-ups and lack of game her partner brings to the table. Full of jabs, she jokes, “Who was lying when they told you you were all that? / And we had it, just another good laugh in our group chat.” Featuring a smooth mid-tempo beat and a deep bassline, the track boasts an effortless flow that her partner can’t seem to compete with. The official song of hot girl summer, Sullivan’s sleek R&B gives you the confidence to break it off and live it up.

Ahead of Sullivan taking the stage, Representative Maxine Waters delivered the iconic “reclaiming my time” line. Ari Lennox also joined Sullivan for a performance of “On It” before it was announced that Heaux Tales had won album of the year. Joined on stage by her mom, who was diagnosed with breast cancer last year and is currently in remission, she dedicated the award to all the Black women who inspired her throughout her life.

You can check out her performance of “Tragic” and “On It” below.