Hurry's Matt Scottoline on giving thanks, believing in yourself, and navigating a sea of Fake Ideas - WXPN 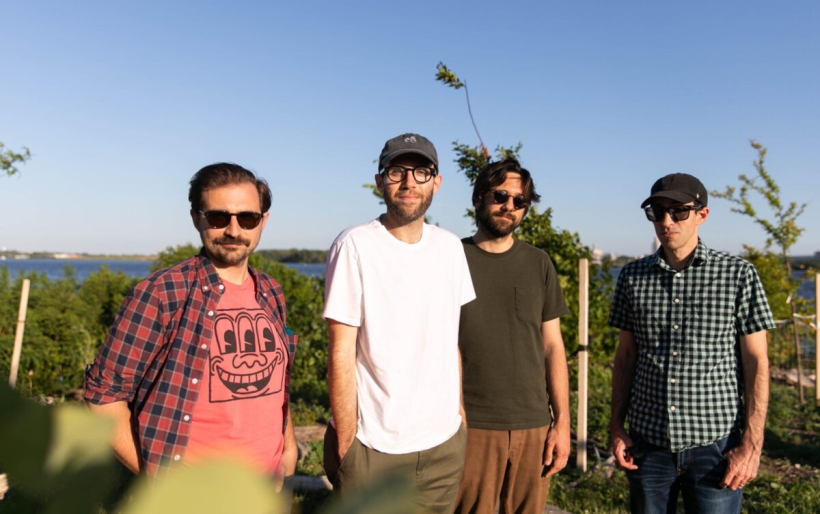 Hurry’s Matt Scottoline on giving thanks, believing in yourself, and navigating a sea of Fake Ideas

Hurry’s fourth studio album, Fake Ideas, is an exercise in combating anxiety. Lead singer and songwriter Matt Scottoline talks openly about his struggles with mental health; he wrote this record while getting into therapy and learning to accept that some intrusive thoughts can be, well, fake ideas. That may sound like heavy subject matter, but Scottoline sings about this over jangly, eccentric guitars similar to Oasis or Pixies that make fun, beachy tunes out of deep introspection. And it helps that Scottoline’s incomparable voice turns every line into an instant earworm.

The album comes with a book, also titled Fake Ideas, in which Scottoline interviews contributors to the album like bandmates Justin Fox, Rob DeCarolis, and Joe DeCarolis, and others like engineer Mike Bardzik and album cover artist Frances Quinlan. I spoke with Scottoline about Fake Ideas, and we began by discussing his inspiration for pairing the book with the album.

The Key: In talking about your thought process for putting together this book, you mentioned another one you’ve read called Thanks A Thousand. Can you tell me a little bit about that?

Matt Scottoline: Thanks A Thousand is written by this writer named A.J. Jacobs, and he’s self-described as an “experiential journalist.” So most of his writing, and most of his books, are heavily focused on one concept, and he sort of dives into it 100%. In this book, Thanks A Thousand, he decided to thank every person who’s contributed to the daily cup of coffee he would get. He thanked baristas and the coffee roaster and that stuff, but he also was thanking the people who make the little cardboard sleeves that go on the cups, and the people who work in the warehouses where the coffee is stored, and, you know, he just went totally crazy with it. That was part of the seed of the book [Fake Ideas].

TK: Sort of a way to thank the people who contributed to the record?

MS: Yeah. It’s sort of an exercise in gratitude. And, I think around the same time that I was starting to formulate this idea, there was some discourse happening online about credits on albums, and more specifically on streaming platforms, and just the way that they kind of don’t exist. So, if you’re an engineer, or producer, you do mastering, you do album artwork, anything like that, really, you’re just not in the streaming realm, no one’s going to really know who did what. So I just thought it’d be interesting to sort of do this hyper-exploded liner notes, basically. And not only highlight all these people who contributed and helped, but also my hope is that, if you buy the record, and you get the book, and you read the book, it’s going to just make the experience of engaging with the album better, and give you a foundation to listen to it on.

TK: What was something that you got out of talking with people for this book?

MS: I mean, honestly, it was just fun for me to talk to everyone. People like Mike [Bardzik], the guy who makes all my records, and we use his studio, and Ryan [Schwabe], who masters things, I don’t really have longform conversations with those people very often. Because with any sort of endeavor where you’re using the services of people, your conversations usually just tend to focus on the thing you’re working on, and it’s hard in general to just find time to talk to people, especially people that you’re kind of close with. And maybe I’m just not in the habit of it. I don’t usually have phone conversations with people. So for me, that was kind of the best part, was just having those conversations.

TK: I wanted to bring up a story that you had in there, about Lame-O Records, because I found this kind of funny. They backed you up with a bit of a standoff with a big company. Can you tell me what happened there?

MS: Yeah. I don’t know if I should name the company or not. I think anyone could probably figure it out if they did the research on it. But basically, Lame-O had paid sort of the biggest independent radio promotion company to do a radio campaign for [a previous] record. And around that same time, I had a hobby to provoke and make jokes about this thing that was happening, called Feed the Beat, which was this predatory promotion that Taco Bell was running at the time where basically, independent bands would apply to be chosen as a Feed to Beat band. They did it every year, and if you got picked for a year, they would give you, like, 500 Taco Bell bucks for your band, so you could eat Taco Bell when you’re on tour for free. And bands would think it was cool.

And, it was just silly to me, it felt silly. So, I would make fun of it a lot [on Twitter]. Like, that was just a thing I enjoyed doing. But anyway, what I didn’t realize was, the sort of link to the music world for this campaign was the radio promotion company that was supposed to be doing my record. The president of that company called Lame-O Records and said that I had to stop. And if I didn’t stop, they wouldn’t promote my album. Which is not a situation that anyone really wants to be in. But I was lucky because Lame-O sort of backed me up. And they offered, you know, “If you want to switch to a different company, we don’t care, we’ll do it.” And yeah, Lame-O doesn’t work with that company anymore.

MS: You know it sounds funny to say, but I’m referring to basically every thought I have. And, what I mean by that is, during the course of making this record and writing all these songs, I started pretty intensive therapy because I had a lot of serious issues with anxiety and depression. And, I think, lyrically and thematically on the record, a lot of it is me starting to realize that a lot of thoughts that I have, aren’t necessarily true. They’re really more informed by the way that your mind works. And for me, it was all these moments of awakening and realizing like, this thing in my life I thought was just bad, not realizing that that situation is that way because your behavior, or the way you think or operate, help that situation to grow and become bad.

And so, I don’t think I’m cured or anything, but I had some pretty powerful realizations for myself during making this and I think just about the way I see the world. The song “A Fake Idea,” I feel like is pretty explicitly about this kind of stuff. And, it’s just this thing of like, “Oh, my God, I’ve been so wrong about everything I thought was true.” And the way that, when you have mental illness or you struggle with something like that, you can be completely unable to see the truth of situations or the truth of your behavior or the truth of your relationships.

TK: You’re saying that that’s a good thing to pull back the curtain and realize that?

MS: Yeah, because in my opinion, it’s the only way anyone can improve their lives. People talk about bubbles a lot. You’re like, “You’re in this Twitter bubble, everything you follow is this news bubble or your media bubble.” And I think we’re all in our own bubbles internally, too. And that’s the hardest thing to realize because you inherently think, if I feel something in my mind, and I’m assessing a situation this way, that’s the truth of it. And I think most people feel that way. And so I think what it’s really about for me is like starting to get more objective, in my own mind, and not letting those fake ideas (not to be cheesy and say the album name) but not to let those ideas and those thoughts dictate your reality.

Hurry’s Fake Ideas is out now, and can be ordered from Lame-O Records, or your favorite independent record store. This interview has been edited for length and clarity.