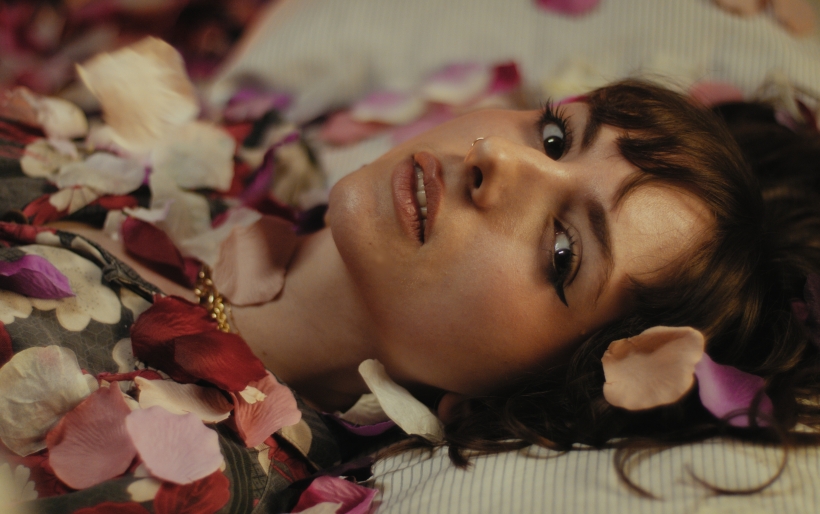 Harmony Woods released their stellar third album Graceful Rage this March on Skeletal Lightning Records, and this week the album got its vinyl edition and a breathtaking music video for the title track.

Directed by Adam Peditto and produced by Katie Dvorak, the video finds frontperson Sofia Verbilla and her bandmates Josh Cyr on bass and David Juro on drums playing in haunting surroundings. The rooms are dimly lit and minimally adorned, with crumbling bare walls, melting candles, and a shower of flower petals falling from above. Through close shots, emotive gestures, and cathartic playing, the video is a consideration of one of Graceful Rage‘s central themes: forgiveness.

“As I’ve further processed the events that inspired the record, and specifically its title track, I no longer see forgiveness as an emotional finish line for a marathon I never chose to enter in the first place, but as a naturally occurring event that can happen with the passing of time,” Verbilla says in a press release. “As I continued going through the motions, I began to notice little signs that I was doing better. These slivers of hope began to accumulate and, eventually, I was able to forgive. Everyone’s journey in healing is different, and I am so grateful for what I have learned through mine.”

Watch the “Graceful Rage” video below and grab your vinyl or digital copy of the album here. Word on the street is Harmony Woods might be announcing some full-band shows in the fall — their first since the album release — so keep your eyes and ears open for more on that. Read more about Harmony Woods’ Graceful Rage in The Key’s interview with Verbilla and producer Bartees Strange here.