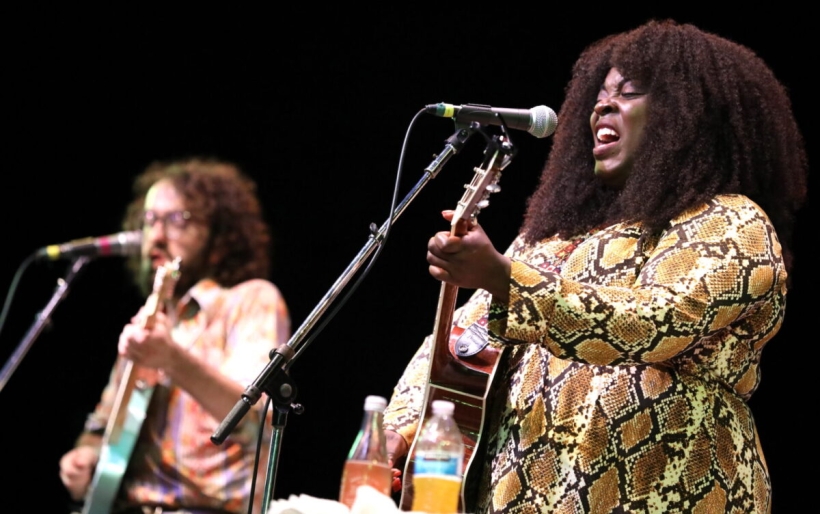 While it can sometimes be hard to believe, the musicians you admire are people too. Chatting like old friends, XPN Morning Show Host Kristen Kurtis spoke with Yola Monday morning as the four-time Grammy-nominated singer / songwriter moved between houses. Brimming with excitement, they discussed her acting debut playing Sister Rosetta Tharpe in an upcoming Elvis biopic directed by Baz Luhrmann, as well as touring, and her upcoming album Stand For Myself.

Instead of moping after her 2020 tour got canceled, Yola decided to write an album. Circling back to songs she started years ago but never released, she decided to workshop them. Unsure if she would be able to get back in the writer’s room, she told Kurtis the isolation forced her to step up and be more responsible for content. While she said this is her most personal album yet, it is also heavily influenced by the research she had been doing about the history of oppression through supremacy. More specifically, she focused on the erasure and whitewashing of ancient African history and the influence of Black women in the birth of rock and roll.

“This album is very much more about a paradigm shift. It’s more about your psychological state, your personal state, the microcosm of yourself more than it is about the macro of society. Every song on this record is about your person, is about the barrier that you have to negotiate to stand for yourself be it politically, romantically, personally, socially, within the workplace with regards to the things you demand and the things you will no longer stand for.”

These ideas not only appear in her music but in her other creative projects as well. Even her role of Sister Rosetta Tharpe, a.k.a “the godmother of rock and roll,” is an attempt to give credit where it’s due. Responsible for the birth of rock and roll, she was the first person to play a distorted guitar and discover legends like Little Richard and Johnny Cash.

“I was aware of her from quite a young age and how that story was obscured and how late she was inducted into the Rock and Roll Hall of Fame, which is bizarre since she actually created rock and roll. I knew that it was going to be important to write about taking up space, and it’s something I’ve been fighting for my whole creative life. To find a space that will allow me to just do me without labels.”

You can stream Yola’s latest track “Starlight” here and listen to her full interview with Kristen Kurtis below.