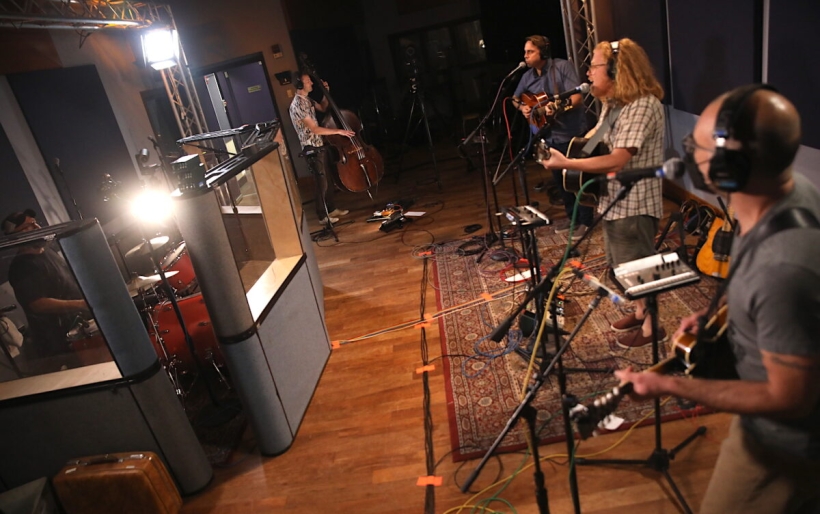 Hoots and Hellmouth | photo by John Vettese for WXPN

Friday’s virtual Free at Noon concert was a true celebration as local favorites Hoots & Hellmouth played the first installment of the series broadcast from XPN HQ since March 6, 2020. Hosted by Helen Leicht on her last day before taking a leave of absence, both band and DJ reminisced on the 16 years they’ve known each other and the joy of finally being back in the studio again. Shouting out their children and playing some old favorites, it felt like a homecoming of sorts.

A wholesome set, you could sense the sheer happiness that seemed to radiate from everyone present. Starting off with “Dishpan Hands,” the band’s soft Americana had a sort of slow-dance-in-the-kitchen sensibility. Facing the realization that he isn’t living up to his ideals, Andrew Gray crooned, “I’ll show you the man I wanna be / in the home I long to see.” Full of wisdom, their songs are like lessons as they reflect on all the things they had to learn the hard way.

While they offer deep insight into all the twists and turns of life, Hoots and Hellmouth still know how to cut loose. On tracks like “You And All Of Us,” the band was plunky and upbeat, with Sean Hoots taking a commanding lead. Featuring an upright bass by Todd Erk and swift drums from Matt Magarahan, everyone was singing along and dancing in what can only be described as an outpour of exhilaration. It was easy to forget you’re watching a studio session on the computer; the band got so swept up in the tracks it seemed more like a bunch of friends kicking back and jamming. Even when they started out slow like on “The Good I Know You Know,” the band go from gentle finger plucking in the first verses to a huge chorus complete with tambourines and shredding on the mandolin by Rob Berliner.

You can stream the full set, see the setlist and peruse a gallery of photos below, and check out our virtual Free at Noon archives here.