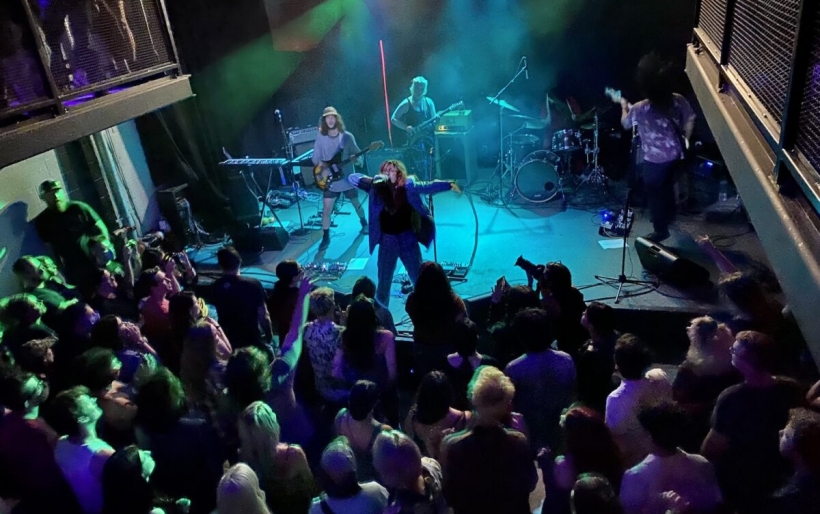 “This is our world now,” Manniquin Pussy frontperson Marisa Dabice told a packed house at Millersville club Phantom Power on Saturday night. It was a bold statement at the end of a bold set in the best way; no one has been untouched by the upheaval of the past year and a half, we’re not done with the pandemic yet, but as we slowly approach the other side, we should remember that the the best way through is forward.

At Mannequin Pussy’s first headlining show since the before times, this manifested in small ways — several folks masked up while mixing it up in the pit, and the crowd at large seemed actively attentive towards one another’s personal space whilst raging — as well as profound ways — the widespread applause when Dabice took a moment before a burning performance of “Pledge” to remind the room that the root of everything bad that’s happened over the past year-plus is white supremacy.

“And the burden — not the burden, but the choice, the necessity [to change that] — falls on every white person in the room,” she said. “And if you are not about that, we do not want you as a fan of this band.” Cheers from every corner. Amazing.

The gig was a one-off for both Mannequin Pussy and their bill-mates Kississippi; the former had a couple days off from their tour opening for Japanese Breakfast, the latter is warming up for their tour in support of the new Mood Ring album, which comes out this Friday on Triple Crown Records. Both sets made us eager to see the bands again later this year at their respective Philly shows, and provided a fine showing of Phantom Power — an old movie house turned music venue just off the Millersville University campus that opened in March of 2020, and promptly closed due to COVID. It’s tucked away on a wooded lot down a short Frederick Street driveway, there’s barbecue outside and terrific sound inside, as well as a sweet micro-Union Transfer layout with a wraparound balcony, bright lights, and great sight lines all around. 10/10, would return.

Kississippi’s set was in full swing when we arrived, and gave fans in the house a taste of Mood Ring — which, based on the new songs played by Zoe Reynolds and her bandmates (bassist Alyssa Millman, drummer Rachel Wild, guitarist Joshua Hayes), is packed with emo anthems transposed into pop bangers. “Around Your Room” and “Big Dipper” sounded sublime, while the coming-out-in-a-few-days “We’re So In Tune” is a romantic and roof-raising singalong of CRJ proportions. Hearing back-catalog faves like “Cut Yr Teeth,” “Indigo,” and “Greyhound” was also a treat, and their sold-out PhilaMOCA show will surely be outstanding.

Mannequin Pussy’s set was a brilliantly-sequenced tour-de-force through everything that they’re all about — soaring and emotive anthems at the top (“Control,” “To Lose You,” “Who You Are”) progressing into a block of cathartic rockers (“Pledge” and “Romantic”) and a pummeling run of minute-and-a-half punk blasts that go harder than anything (“Kiss,” the title track to this year’s Perfect EP, an incredible performance of the cop callout “Pigs Is Pigs” with Bear Regisford on lead vocals).

In addition to the core trio of Dabice, Regisford, and drummer Kaleen Reading, the set provided a local debut of the five-piece MP lineup with Max Steen on second guitar and Carolyn Haynes on keys, guitar, and percussion. They sounded stellar, played 18 songs in just under an hour’s time, and for the heaviest moments, Dabice put her axe to the side, took the mic to the front, and worked the massively engaged crowd. “This is our church,” she warmly said when she noticed between songs that the pit had eased up because somebody had lost something in the fray, and the room was helping locate it. And when everybody sang along to “Drunk II”? Chills.

The crowd’s energy on the “I still love you, you stupid fuck” part of “Drunk II” into the first “Missy, you’re so strong” part is a beautiful thing. pic.twitter.com/DaxOJ7Uq2J

Coming up on the calendar, Mannequin Pussy plays three nights at Union Transfer opening for Japanese Breakfast’s sold-out run of shows, beginning this Friday, August 6th; they also headline Union Transfer on October 29th with two terrific Baltimore bands, Angel Du$t and Pinkshift; tickets are available here. Kississippi leaves for tour with Insignificant Other next week, and plays a sold-out album release party at PhilaMOCA on Friday, August 20th; tour dates can be found here, and Mannequin Pussy’s Phantom Power setlist can be found below.