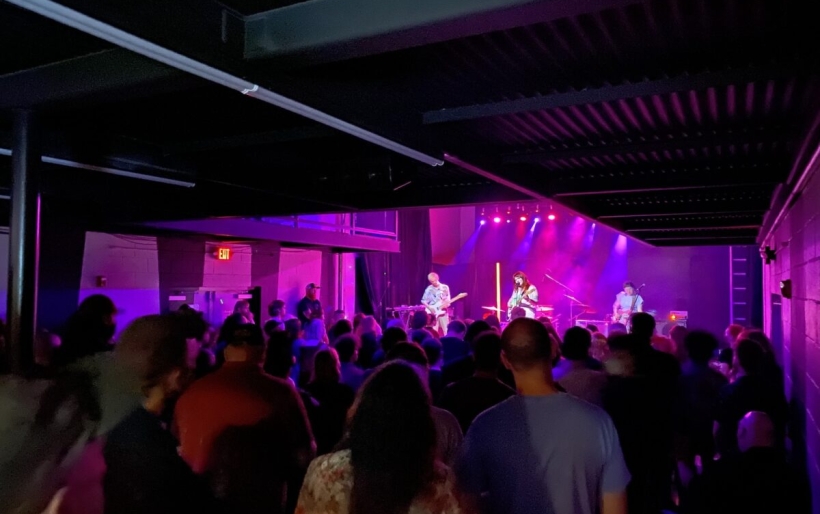 Shows are coming back. Here are six new-ish venues to keep an eye on.

It is an undeniably strange time to be a lover of live music.

On the one hand, concerts are coming back, woohoo! We’re finally able to once again watch our friends and favorite musicians play their songs in real life and not on a smart phone screen. On the other hand — I mean, you’ve seen those anxiety-inducing scenes of the massive Lollapalooza crowd that went viral over the weekend, right? Being among throngs of unmasked people of questionable vaccination status seems like not the best way to collectively reach the other side of COVID-19.

In the midst of it all is a concert landscape here in Philadelphia that is vastly changed from where we left it in the before times. Yoni Kroll has a rundown of that in today’s Skeleton Key: beloved venues closed. New spaces have emerged. Some long-running spots are seeing a second life in the late pandemic. And some of the most exciting shows we’ve seen so far in 2021 are happening at those places that saw a gap and moved in.

Don’t get us wrong: we’re excited as ever to return to long-standing, beloved spots like Ardmore Music Hall, Johnny Brenda’s, Union Transfer, World Cafe Live — spots with strong calendars and (in the case of AMH and WCL) exciting renovations. We talked to those places back in the spring about the new normal of concertgoing. Today, we’re pointing you to six new-ish venues that we’ve either checked out and loved, or cannot wait to visit. Get jabbed, mask up, and we’ll see you at the show.

The thing about live music in Atlantic City: it happens, and it’s often quite good. Scan the calendar and you’ll find shows by Erasure, Erykah Badu, and Mandy Moore in the coming months. Thing is, those are all happening at casinos, which aren’t necessarily the most appealing environment to watch a concert. Enter Anchor Rock Club: a 650-capacity space that got its start in fall of 2019, and closed up shop six months later. In its new life, former Johnny Brenda’s talent buyer Chris Ward is steering the ship, along with his old cohort Greg Mungan, as well as former Franklin Music Hall marketing guru Reid Benditt and South Philly Taproom’s Adam Garbinski. Their vision is to bring the indie spirit of Philadelphia down the shore — where much of the Philly scene vacations already — with tightly-curated shows, DJs, and a hospitable atmosphere. They’re working closely with specialized Philly promoters like Ars Nova and Deathwaltz, and their calendar kicks off next weekend with a series of shows to compliment Phish’s three-night-stand on the beach. Things get really exciting on Saturday August 28th when Sun Ra Arkesta headlines, followed on September 22nd with a show by Philly indie favorites Hop Along, and more events to be announced. Public transit from Philly seems relatively easy, and shows will reportedly wrap up in time for fans to catch the last train home.

A sibling establishment to the dearly departed Boot & Saddle, South Broad Street’s matchbox-sized club The Dolphin has always been a home to DJ nights first and foremost, but it’s no stranger to concerts either — a Yaeji performance there in 2018 was particularly fantastic. But when its companion closed up operations last year due to COVID, the Boot & Saddle sound system was transported a few blocks south and this summer was broken in with a sold-out performance by classic rock fueled Philly band Electric Candlelight on the 4th of July. We’re excited to see this concerts-in-the-club trend continue — Dave P of Making Time has some things on tap reportedly — and we’re excited to see what becomes of the old Boot space! We have no official word yet on whether a new tenant has made move-in plans yet, and while the venue-to-gastropub thing is not without precedent or without merit (The Khyber Pass as a bar/restaurant undeniably great), we here at The Key hope that B&S remains a home for music in one way or another.

Probably the least “new” venue in this batch, humble Manayunk venue The Grape Room has been around in some configuration or another since the 90s. But the energy they’re putting into emerging from COVID feels like a renaissance. Booked by Kevin McCall of Philly modern rockers Andorra, it is still very much a space for open mics and musician hangs that spill out onto the picnic tables lining the Grape Street sidewalk in the late night hours. But the level of bookings definitely feels stepped up in a big way: their first night back in early July featured Americana rockers 49 Burning Condors, followed by a massive mid-July packed house with Riverby and The Lunar Year that was a thrill to attend, and their August calendar features exciting shows like the Lo-Priestess / Best Bear bill on the 14th, and the Groove Merchants / Tisburys / Dweller show on the 28th. (Full disclosure: every band on the latter bill features an XPN alum of some sort, but we’d be psyched even if that wasn’t the case.) The calendar is predominately local, which makes sense: Manayunk is a part of the city that was once a hub of the music and arts scene, but grew into a heavily-commercialized space by the early 00s that was derided and mocked by the scenester intelligentsia. Now that much of that post-millennial animus has subsided and dedicated music spaces like The Grape remain standing, it’s great to see something of a return-to-roots for the neighborhood.

(UPDATE 8/7: Since this article published earlier in the week, some things have changed at Milo. Members of the team have left, including an organizer of the weekly songwriter’s circle, as well as Yeho Bostick, who ran the venue’s social media. A planned concert for Saturday featuring Erik Kramer was relocated to a different Mt. Airy space, The Vale, and Milo posted that they were temporarily closing for “updating our Health and Safety Protocols and procedures.”)

Speaking of a return to roots, how great is it to know there’s once again a dedicated music space in the Northwesterly wards like Mt. Airy’s Milo The Meeting House? Longtime Philadelphia concertgoers might remember this room as North By Northwest — I have fond memories of seeing Amos Lee play here in 2003, and Magnolia Electric Company with Arab Strap the following year. But as the concert landscape shifted in the mid-00s, NXNW didn’t keep pace. By the 2010s, the one-time venue was either vacant, or an endless series of businesses that did not stick. Craig Wilson, a local chef, started offering the stage as something of a rehearsal space for local artists during lockdown, which led to a low-key standing jam on Thursday nights, which is now called CHURCH, a central fixture of the venue’s programming. The idea of community and collaboration is a core philosophy at Milo, so while Thursdays are a spot for local improv instrumentalists of all stripes to flex their chops, Wednesdays are a songwriter’s circle that puts the stories and lyrics in the forefront. Mondays are Philly Mic Check, a R&B / jazz centered jam hosted by Blaq Mel, and weekends are for built-out bills circling around the singer-songwriter, jam and reggae scenes. Rachel Andie and the Vth Element’s farewell Philly headliner last month packed the house, and August features a night with Taylor Kelly and friends on the 13th and Soul Shakedown Party with H.R. and Timi Tanzania on the 21st. Local bassist and social media force of nature Yeho Bostick diligently documents all of Milo’s goings on via social media, and if you ever get show FOMO, just take a look at what he’s posting to their IG.

Located up North American Street in the heart of what Google Maps is apparently calling Olde Kensington, Original 13 Ciderworks is a building with tall ceilings, deep aisles, and refreshing beverages that hosted one or two gigs in spring of 2020, just before lockdown. Those promoters — the 4333 Collective — are back in force this summer, starting off last month with a couple all-ages shows by Curtis Cooper and Ali Awan. Those ramped up to the August itinerary of Have A Good Season and Rally Point on the 5th, followed Rubber and Humilitarian on the 14th, and a Doused album release show early in September. Keeping your eyes on Original 13 is just as important as keeping your eyes on 4333 in general, since they’re starting to branch out to other venues in Philly like Underground Arts (last month’s ridiculous DIY Super Bowl headlined by Carly Cosgrove) and Ortlieb’s.

I talked a lot about this Central Pennsylvania space earlier today in our review of Mannequin Pussy’s headlining show there this weekend, but to recap Phantom Power: bright lights, great sight lines, and a layout that feels like a compact Union Transfer. Chameleon Club and Tellus360 alum Gregg Barley launched the space in early 2020, only to find it closed down mere days after its inaugural show. His stated goal at the time was a venue that was across-the-board inclusive, and that was evident on Saturday night, when gen-Z punks stood side-by-side with rock dads and everyone in between.