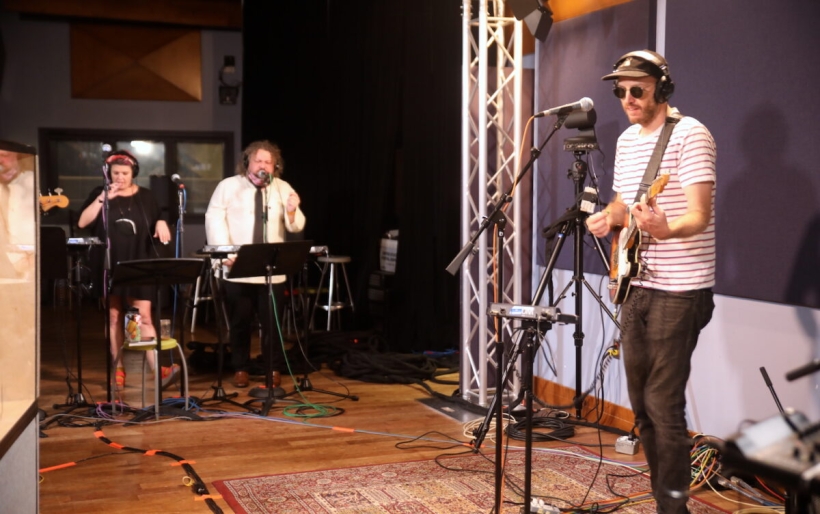 As #XPNMTVWeek winds down, we welcomed Pat Finnerty and the Full Band into WXPN studios today for a celebration of the first golden age of MTV: the rock of the 80s era.

Finnerty is a singer-guitarist who has gained renown in the Philadelphia scene over the past several years for two main reasons: a predilection for making viral web content (rooftop concert videos, an IG live with Dave Grohl) and more notably for his celebrated live band karaoke, which in the pre-pandemic times brought joy to venues from Fergie’s to Johnny Brenda’s.

That energy was on full display when Finnerty and the Full Band — bassist Luke Rinz, keys player Mike Vivas, drummer Patrick Berkery, and vocalists Lily Cope, Ali Wadsworth, and Ryan Williams — kicked off Free at Noon with Dire Straits’ “Money For Nothing.”

The set went on to highlight touchstones of 80s pop, with Langan taking lead vocals on Robert Palmer’s “Addicted To Love,” Cope and Wadsworth sharing the spotlight on The B-52s “Roam,” and Williams taking center stage on a spot-on rendition of Prince’s “When Doves Cry.”

“We’re playing songs on the radio right now, that’s ridiculous,” said Finnerty on a break between songs. “I thought the Palmer was the highlight of my life but now we’re here.”

Check out a full video of their performance and a photo gallery below, tune in starting at 7 p.m. tonight for Robert Drake’s 24-hour XPN80sXplosion broadcast, and explore the Free at Noon archives here.