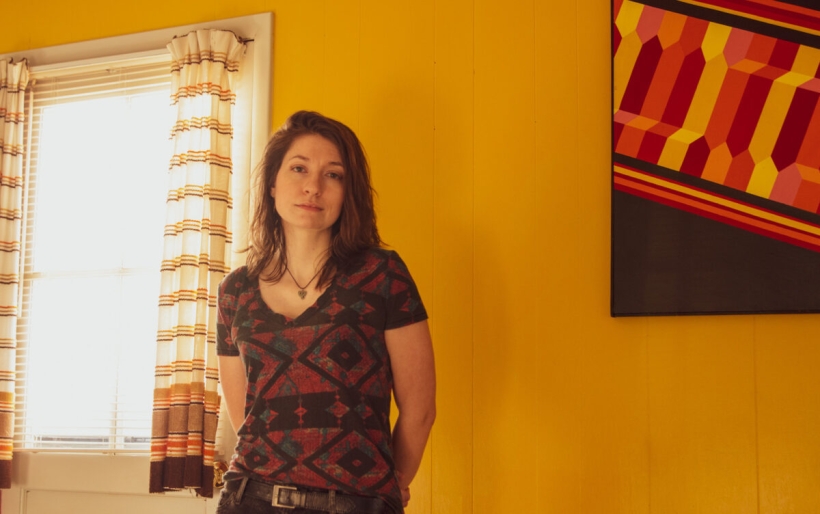 Grace Vonderkuhn | photo by Skylar Kley | courtesy of the artist

The “sophomore slump” curse evades Grace Vonderkuhn, who releases their second LP via Sheer Luck Records this Friday. Pleasure Pain is the same noisy, punk-rock Grace Vonderkuhn sound we love, but with even more to offer than before.

Delaware singer / songwriter Grace Koon attributes the growth in her music to her own personal growth, as well as the recording team at Headrooms Studios and the band’s recent signing with Sheer Luck Records, a Philly label focused on “elevating marginalized voices.” With a new team of engineers and management, Grace was ready to share her next evolution with the world. Enter, COVID-19. After over a year of sitting on the completed record, the timing is finally right to release. Fortunately, no relevancy was lost in delaying the release–a sign of a timeless album.

Let it also be known that however much you enjoy Grace Vonderkuhn’s recordings, their live performance will transcend that. Grace and the band play at Underground Arts on August 13th; Jackson Inn in Wilmington, DE on August 14th; and September 4th at PhilaMOCA; more information on all these shows can be found at the XPN Concert Calendar.

The Key: You describe this new record as coming from a “new-found perspective” and being the result of an “awakening” you had recently. Can you elaborate on those feelings?

Grace Vonderkuhn: I wrote a lot of the songs over the past four years probably. We finished recording right before COVID hit, and a lot of the songs came from a period of growth in my 20s. I feel like a lot of people go through growing pains while you’re figuring out adult life. A lot of the content in the songs is me becoming more self aware of who I am. I turned 30 in February. There’s definitely a more self-assuredness [to turning 30].

TK: How was the recording process different with this second record versus with the first?

GV: The first record we recorded ourselves with a producer — Matt Morrissette– and most of it was done in a cabin where I lived in PA. Which was a lot of fun. I was literally living with this record for so long. And the second record we did at Headroom Studios in Philly so we were just going into the studio, putting hours in, and going home and taking a break from everything. I’m not sure if [the recording process] took longer, but it definitely took longer to release [the second record]. We wrapped up in February right before COVID hit so we were just sitting on it for a while because I didn’t know what was going to happen in the music industry. It was just a very unsure time. The record was sort of “nesting,” and I’m so ready to get it out. It’s very exciting. The wait time to share it has definitely been the biggest difference between the two records for me.

TK: Do you find that because there was such a big gap between when you wrote it and released it that it still feels current to you?

GV: There’s more of an emotional buffer for me. The feeling is less raw, because I’ve had time to process the emotions on the record at this point. When I was recording it, I was still kind of emoting and getting it out on the recordings, and now it’s done and I feel less worried about what people will think. I’m just ready to put it out.

TK: What are your plans for playing the new record live?

GV: The record comes out on August 13th, and that night we’re playing at Underground Arts. And then on August 14th, we’re playing our hometown release show in Wilmington, DE at The Jackson Inn. And then we have a few more shows lined up in the next few months. We haven’t planned a tour yet. The vinyl release is delayed until the fall so I haven’t planned a tour yet because we won’t have the vinyl, but also it’s kind of touch-and-go with COVID so I don’t want to plan something and then have to cancel it. So we’re just kind of taking things one day at a time.

TK: How has your experience been working with Sheer Luck Records?

GV: It’s been awesome. I’m really glad to be working with them. We were on Egghunt Records for the first album, and now, working with Sheer Luck, has been amazing. They are just very supportive and I feel like they got my back. And I love that it’s run by women. There’s definitely a deficit of that in the industry, so it’s great to have women supporting women and lifting each other up. I’m a big fan.

TK: Concerning your process — when do you find time to write?

GV: I actually just moved houses in Newark, DE so I’ve been totally focused on that and everything else has been pushed to the wayside. Sometimes it can be really hard to find time to write, especially with big life changes going on. But during the pandemic I was able to write another album that we have yet to record, so I’m pretty stoked for that. There was a big chunk of time where I was like, “Um, I gotta find something to do.” I don’t have a specific set of rules or anything that I go by, but I do find that if I just pick up the guitar regularly something usually happens. The more I make time to play, the easier it is to get stuff out.

TK: You do most of the writing alone, so when you bring it to Dave (McGrory, drums) and Brian (Bartling, bass)? Do they help shape where the song goes from there?

GV: In general I’ll have the music and lyrics and the arrangement sorted out [when I share it with Dave and Brian]. They’re excellent musicians and I love playing with them. I feel super lucky. They write their own respective instrument parts over the song.

TK: You have so much energy when you play live — do you especially enjoy the performance aspect of making music?

TK: How do you think your audience has grown since your first record? Are your fans still based mainly in Delaware or now more in Philly?

GV: I think it’s a mix. Delaware is definitely our home base, but we also feel at home in Philly, too. And with touring a lot of the country there’s pockets of people who would come see us. We were in, I don’t even know, some town that’s far from where we live, and people were singing the lyrics when we played there. And I was just like, “Whaaaaat. That’s crazy.” But with the internet now, people from all over could potentially hear of us, so that’s cool.

TK: What are some hobbies you enjoy?

GV: I love yoga. I feel like it’s necessary for me to be mentally healthy. I have to get yoga in. I love hiking and just being out in nature. I usually have my dog Arrow with me and we’ll probably go later today, actually. And I’ve been getting into more baking and cooking especially over the pandemic. I’d be like, “Let me figure out how to make a cake.” And I’d have a whole cake and not know what to do with all these super decadent desserts [I was making]. I was just like, “Well I made it, and that’s the fun part.” I’ve also been learning French on Duolingo. I’m interested in visiting France someday but I’d also like to go to Canada and know a little bit of French to get around.

TK: Who are your musical influences?

GV: It’s definitely changed for every record, and each song even. I think some of my top influences and the bands I always go back to are the Pixies and The Breeders. I was really into Ty Segall nad Built To Spill for writing Pleasure Pain. Buzzcocks is definitely a big one too. There’s definitely punk and post-punk and even like 70’s rock and 90’s rock influences. And Nirvana of course. They’re pretty pervasive for a lot of people.

TK: The album artwork for Pleasure Pain really stands out to me. Did you design it?

GV: I did. Oddly enough the image is of a sunset on the day of the presidential election in 2020. The sunset that day was just insane, and I took a few pictures of it because I knew I wanted to manipulate a photo–possibly of the sky–for the album cover. I edited [that photo] death, basically. I went through a few iterations and finally I landed on what is now the album cover. I wanted the colors to show the duality of pleasure and pain, and the dark and the light.

Pleasure Pain is out on August 13 via Sheer Luck Records. For more on Grace Vonderkuhn’s upcoming shows, head to the XPN Concert Calendar.