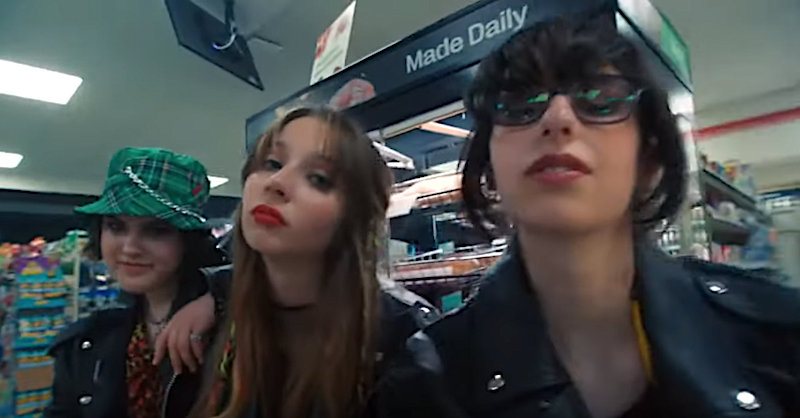 At the risk of oversimplifying things, Froggy’s songs can fit in one of two camps: songs that deliver serious social commentary through raging hooks, and songs that are goofy for goofy’s sake. “7-Eleven Nachos” is one of the latter — it’s a circle-pit-conjuring jam that’s very directly about the band’s post-practice enthusiasm for nachos from the national convenience store chain. As the story goes, Froggy asked 7-Eleven to sponsor the band as a joke. 7-Eleven said yes.

The result is a cinematic music video that follows Morgan, Brooke, and Fiona as they race to their local Sev in a stylish convertible, tear up the aisles in a shopping spree, and play a gig in the parking lot. It’s funny, it’s fun to watch, and you can check it out below.

As it happens, this is the second video Froggy has made for “7-Eleven Nachos” this year; their DIY version following loosely the same storyline dropped back in January. Watch it below, listen to Sopa de Elote and buy a download at Froggy’s Bandcamp, and see the band play an acoustic set on Wednesday, September 22nd at Doylestown snack shop Evolution Candy; more information at Froggy’s Instagram.