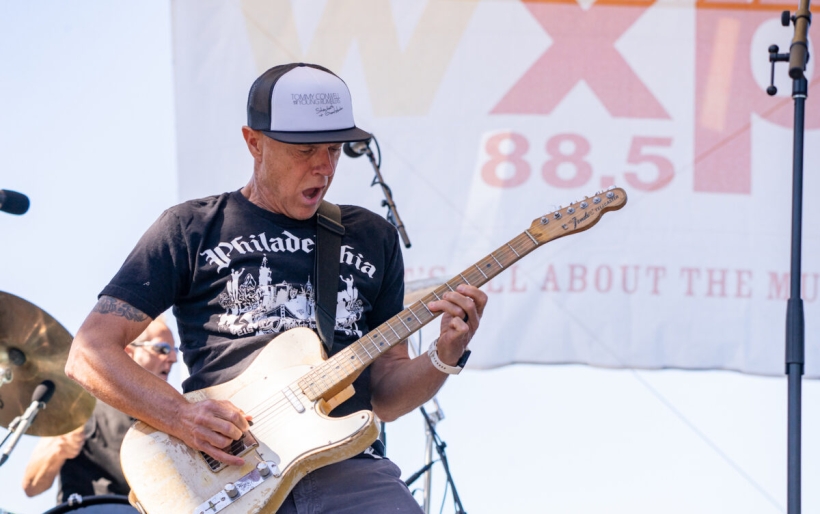 Tommy Conwell stans the 80s on the XPNFest River Stage

Tommy Conwell is in a time loop, and he’s totally good with that.

The veteran Philly rocker took to the River Stage on day three of XPoNential with his longtime band The Young Rumblers, kicking into the roaring boogie of his 33-year-old single “Workout.” It felt like a flashback of sorts to the retro-50s aesthetic of the late 80s, and for whatever that’s a head-spinning combination, Conwell sold it with conviction.

“The 80s are comin’ back,” he shouted two songs in (and throughout the set) and to whatever extent he’s very much occupying a moment in time, it’s clear it’s a moment he loves. “I don’t know how it sounds on the radio, but it sounds good here,” he said, before going into “If We Never Meet Again,” adding some historical context: “We did this song on the David Letterman Show in 1989.”

His 1990 single “I’m Seventeen” was a set standout, with beautiful piano accompaniment as Conwell looked back at youthful alienation from the perspective of somebody decades older: “All I know is I’m seventeen and you don’t know how I feel.”

“Walkin’ On The Water” has some serious guitar shredding, “Goin’ Back To Philly” featured lyrical tweaks to work XPoNential into a verse, and his biggest hit, “I’m Not Your Man,” rocked the set to a close.

Check out a photo gallery and listen to an audio archive of the performance below.