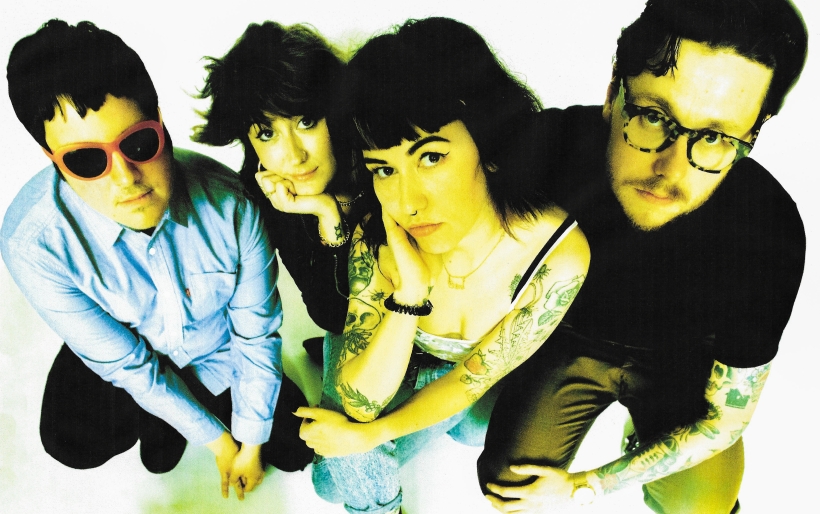 Wilmington’s Eyebawl will represent the local music scene at Firefly

Every year, Firefly Music Festival brings artists from around the world to perform at The Woodlands of Dover International Speedway, and every year it invites a local artist to rep Delaware and share the stage. In 2021, that band is grunge pop rockers EyeBawl from Wilmington. Although the reasoning behind this selection seems lost on Eyebawl front-person Erin Silva (she’s much too modest), fans of the band and their Pittsburgh-based label Crafted Sounds would agree: they more than fit the bill.

For over five years now, Eyebawl has been putting out music and playing in the Delaware scene, which is comprised primarily of Wilmington clubs like Jackson Inn, Oddity Bar, and 1984 (who shut its doors since the onset of COVID-19). The band combines the starpower of drummer Brian Bruce, a two-time Firefly vet, and bass player Jillian Willis of Cosmic Guilt, XPN’s Artist to Watch this month. Not to mention new lead guitar player Andrew Benenati, who frees Silva from playing the “tricky riffs” that impeded her engaging stage performance.

A couple weeks ahead of this life-changing opportunity for Eyebawl, Silva chatted with The Key about this opportunity. Read on for our conversation about how the band is preparing to take the Firefly stage and how Silva’s creative direction is taking Eyebawl to the next level, and watch for their set at 3:30 p.m. Thursday on Firefly’s Wonder Stage.

The Key: How does it feel to move from a local stage to a national one?

Erin Silva: It’s this culture shock situation. Some of the stuff is the things you have to do to get ready for regular shows, but every single part of it is so much more grand. There’s 50 people emailing me for one thirty minute set. It’s really cool, very intense. You start to understand why bigger bands have so many people around them all the time. You get tech people reaching out, you have publicity people reaching out. There’s press…basically, so many moving parts that I was unaware of until now. It’s also really cool for the scene, because if we can do it, then so many other bands around here can do it.

TK: How were you first contacted by Firefly to play the festival?

ES: It’s a little bit of a strange story. But I had a man I had never met before DM me on Instagram. And I was like, this isn’t real, right? But I was so excited anyway, because this was insane. So I messaged the guy back, and he said he was the president of AEG [the presenters of Firefly Music Festival] and asked if EyeBawl would like to play Firefly. Literally one line of text in a DM on Instagram. So he emailed me a contract, and fortunately our drummer Brian “Octie” Bruce has played the festival two times before [with the bands Mean Lady and Fiance], so I asked him to see if it was real or not.

TK: What has preparing for this festival looked like for your band?

ES: We did want to put something new out to get hype, but that didn’t work out. And we realized that we needed new band photos–we wanted to step it up. We didn’t want to just look like a local band. We wanted to branch out a little more and look more professional. So we hired a really cool photographer [Rhiannon Akatsuki] to take edgy, cool photos for us that I’m really proud of. Akatsuki’s work is incredible.

TK: Who are you looking forward to seeing at Firefly?

ES: Number one, I’m really excited to see Turnstile. I was shocked they were playing. Over the years, Firefly has definitely evolved. When Firefly first started, they had bands more geared to classic rock. And maybe because there are different owners, they’ve decided to go in a different direction and make it more accessible to different styles of music. It’s been cool to see new things. Obviously, I’m hoping to see Billie Eilish. That would be insanely incredible. And she’s so young and so popular right now — to see her now would be a really incredible opportunity. Who knows what’s going to happen to her down the line. It would be cool to say I saw her.

TK: Are you planning to tour after Firefly?

ES: We have some shows booked for October, but not much past that because I’ve been really focused on Firefly. And with COVID, I’ve been wondering what things are going to look like in the winter. So I haven’t been trying to book much. We all — band members Jillian Willis, Brian Bruce, and Brian Benenati — have different jobs, also. Touring is definitely something I want to do though. Maybe after we put out this EP. So probably early next year depending on COVID, of course.

TK: You have a side project with Jillian Willis, Sug Daniels, and Chelsea Grant called Dirty Boots. How did that band form and what are your plans?

ES: That band was something we all needed in the middle of COVID. We were all just like, “What is happening? What is life? Is everything we’ve been building crumbling?” We all saw each other anyway — Sug, Chelsea and I lived together and Jill and I work together. We were all comfortable being together because we were in a small circle, so it was really cool to have that project to keep us motivated in music. We made three songs and videos. We were hoping to get them released earlier, but there’s a three-part video series debuting early next year. I don’t know if we’ll be doing anything else, but it was a fun little side project that helped all of us get through a pretty tough time and I’m really thankful for that experience.

TK: You do all of the illustration and animation for Eyebawl’s creative direction. Do you have a background in art?

ES: Yes, I went to the Art Institute of Philadelphia — it doesn’t even exist anymore — but I went there for animation in college. So I’ve always been an illustrator and graphic designer. I mean, I’m kind of like a jack-of-all-trades. I don’t have one particular focus; I kind of just do everything. I’ve done all of the merch for the band and the graphics for the cover artwork. It seems like animation is worth doing because — especially with Instagram, which is my biggest platform to reach people — it’s moving toward more video-based content anyway. They wanna be like Tik Tok. So when you can grab people’s attention with a moving graphic, it gets people more engaged. So I’ve been trying to dive more into that.

TK: It must be rewarding as an artist to match music, a sonic experience, with visual art.

ES: It feels good to utilize all my different skills and my interests in this one project. When I started Eyebawl, it was just me playing my guitar. And honestly, I never expected to even be a band. But I had a friend who was booking for Homegrown Cafe in Delaware and he needed someone to play one night and he knew I was making music. And he was like, “you should just play.” And I was like, “I don’t know; I’m really scared.” If I was told ten years ago I’d be doing any of this stuff, I don’t think I’d believe it. So it’s very cool.

TK: I read in an interview you had with !N Wilmington that Grimes was a huge influence on your songwriting. In what ways would you say she inspires you and has that relationship changed recently?

ES: Inspiration [for the band] definitely changes a lot. Grimes definitely inspired me when I first started writing — not that my music sounds anything like hers — but she was such an inspiration for me. When I heard 2012’s Visions, it blew my mind. It’s dark, and I really like music that sounds happy, but it’s sad. It resonates with me because I feel that way, too. That’s how I try to write my music, to be sad and loud. I don’t want to just be sad, but there are harsh realities. And I want to be able to say these things that aren’t always super happy and make them sound ambiguous. So, I was really obsessed with that album, and then she put out Art Angels and I was disappointed in the album at first. It didn’t seem like her — it was so poppy. I tend to be really harsh about albums. I have to tell myself to “give it a chance.” If you love someone’s art, you have to give it a chance, and it can grow with you.

TK: Before we sign off, do you have any closing thoughts about your involvement in this year’s Firefly Music Festival?

ES: I just want to say how exciting it is for me to have been asked to play this huge festival after such a dark time. Honestly, I feel like life has been hard for our age group for maybe 20 years now. And it feels like, “Alright, we’re finally adults. We’re finally in charge of our lives, and get to do what we want,” and then COVID speaks. I feel that a lot of people will agree that there’s this disparity here. So, many of us have worked hard to earn this little thing that we think is ours and all of a sudden it feels like we don’t have it at all.

[The COVID-19 pandemic] felt like I was floating in space. I was losing grasp on reality, and then I got his DM on Instagram. Like, wow. It’s really important to find ways for yourself to hold out for hope. Your reality may be like this right now, but that doesn’t mean it’ll be like that forever. Also, I’m hoping when we do play, we can make connections and help my other friends in these bands that I think are so incredible and deserve opportunities like this.

EyeBawl will play Firefly Music Festival on Thursday, September 23rd on the Wonder Stage at 3:30 p.m.; tickets and more information can be found at the festival website.