Finding Your Rhythm: Barbara Duncan learns and leads from behind the drumkit - WXPN | Vinyl At Heart 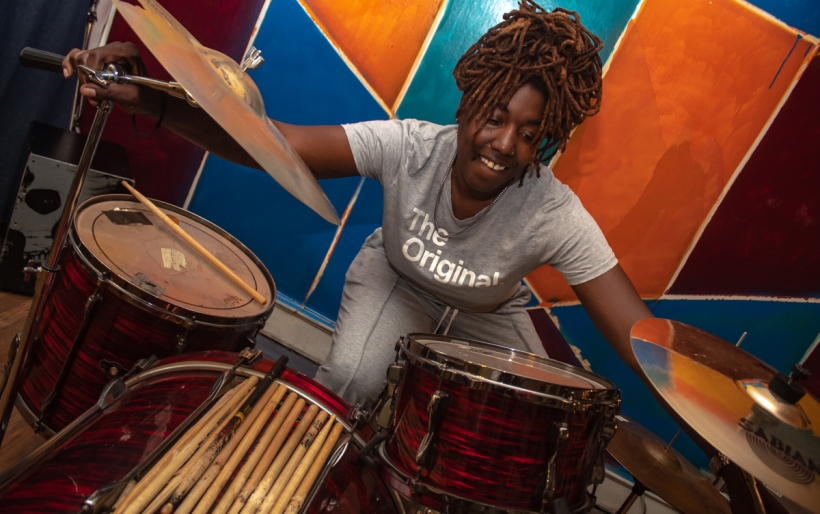 Finding Your Rhythm: Barbara Duncan learns and leads from behind the drumkit

Let’s not tokenize her. Yeah, she’s a female. Yeah, she’s a drummer. And yeah, she fits into those identities both simultaneously and separately, but for Barbara Duncan, the novel concept of a female drummer is actually not all that novel.

Duncan, who also goes by Muzikaldunk, has been on the Philly scene for years and has played in a ton of bands — including the Joe Jordan Experiment, Rubber, and Mobbluz. She’s known not only for her rambunctious playing style but also for her luminescent grin.

Duncan was exposed to music at an early age. She recalls Friday night jazz sessions hosted by her mother at her childhood home. In addition to being influenced by her mother’s own musical prowess, witnessing jam these kickbacks solidified her interest in music.

“I’m hearing all this music and the jam until like three or four in the morning, then I wake up ready to try to repeat what I heard the night before,” says Duncan. “And my mom didn’t care. It was two drum sets and a keyboard downstairs at all times. I was able to just sit down and play whenever I want. It was really a very unique experience”

For a while in her younger years, Duncan toggled between music and sports, but eventually, there was a turning point. From ninth through eleventh grade, Duncan played on the varsity basketball team at Prep Charter high school but decided to quit the team when she felt that her own athleticism wasn’t on par with other players who were more invested. By this point, Duncan had already created a school club where she taught students basic drumming after being inspired by the film Drumline. After leaving the basketball team she approached a teacher and asked if they could purchase drumline equipment so that the club could become more official and play at sporting events. The teacher obliged and Duncan was now tasked with finding a teacher to lead the line; luckily her computer teacher was a former drum major at an HBCU. The Prep Charter drumline grew in popularity, not just in the school itself, but around the city, but more striking was the fact that Duncan’s founding of the school drumline lead to the Prep Charter developing a more robust musical program.

“It’s a whole program now,” says Duncan. “I thought it was pretty dope. They were not even thinking about a music program until I actually started the drumline.”

In adulthood, Duncan has made a career out of music. In addition to playing in a handful of notable bands in the city, she has toured and taught internationally. She currently serves as a Coordinator at Beyond the Bars, whose mission is to provide students with a “music and career skills program that is dedicated to interrupting the cycles of violence and incarceration while helping our students recognize their immense potential and bright futures.” Duncan is one of many notable working area musicians who are teaching at Beyond the Bars — other current and past faculty includes Bets Charmelus of Ill Fated Natives, Pierce Jordan of Soul Glo, and Reef the Lost Cauze. For Duncan, there is something special about learning from people who are actively doing the work.

For some time, Duncan attended Berkley School of Music, but eventually transferred to the Community College of Philadelphia. Here, in this seemingly more lackluster school, she got to learn from cats who she also ended up being acquainted with on the musical scene.

“Boston, the city, was very weird and awkward for me at that time. I wasn’t prepared for that energy just yet,” says Duncan. “I’m like, Ooh, let’s see if I can push through. And then, uh, the financial course came down. It’s like 8,000 more dollars for your second semester. I was like, well, I didn’t need to start there first. And I left. I literally left before the first class.”

After weighing the options between the other schools that she was accepted to, Duncan decided to enroll in CCP.

“How I’ve gotten this far is from CCP’s education and their programming,” says Duncan. “The schools had professors who were still working musicians, and some were still touring. It helped me to understand the livelihood of it all: oh, you can still work, you can pass on that information without feeling like you’re losing out on your own opportunity now.”

In a home that was passed down to her by her mother, Duncan is currently running and operating a music studio and rehearsal space in Southwest Philly. Ideally this space serves as an affordable option for local musicians and a community hub for creatives. This can be seen in the multiple drumkits in the house and murals by friends of Duncan.

“So you can come here. If you’re low income, you’re broke,” says Duncan. “You just needed somewhere to go in the Southwest area. Because it’s not many places in the Southwest you can do that.”

Now that the pandemic has become a thing of somewhat normalcy, Duncan is excited to dig deep into her production work and begin playing more shows. This Fall, fans can expect a solo production album and a new single from the Joe Jordan Experiment, both of which Duncan engineered and produced — keep your eyes open, too, since you always stand a chance of spotting her onstage.