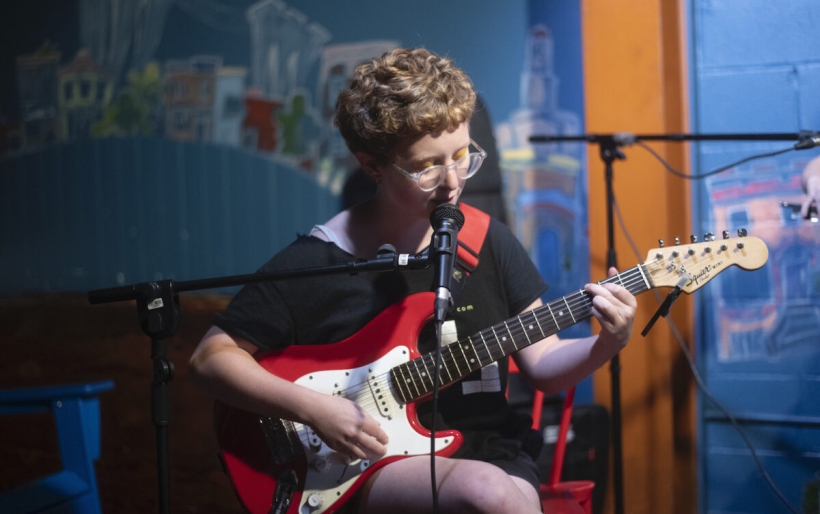 Deer Scout | photo by Julia Lieby | courtesy of the artist

Catching up with Deer Scout

The first time I saw Deer Scout play, I was 22 and freshly out of college. I had moved to New York City earlier that morning. That night, eight or nine bands were slotted to go on in a beautiful, purple-hued two-floor house in Bushwick, Brooklyn where a bunch of artists lived. We stored our gear in a host’s bedroom over piles of clothes and half-lit candles. That’s where I met Dena Miller and watched as she and her bandmates on cello and bass played as dings of crowd laughter, musty air, cheap beers, and cheering nearly washed over their set. You had to stand pretty close to absorb it all, and I’m happy I did.

A few months later, Miller hosted a homecoming show in her apartment uptown. She made mulled wine and pasta for everyone. I remember potting ourselves into her living room crevice with each band in stripped-down glamour as they propelled their instruments with a small box of an amp. Miller wore red elf shoes and the crowd reflected off a mirror hanging above performers.

Pre-pandemic, Deer Scout played in my living room where each reverberation of Zuzia Weyman’s cello and Miller’s vocals melted into the brick wall like heated caramels in a microwave. The room, illuminated with a few string lights, circled the brick alongside a bulb stationed in a birdcage-styled container. Everyone sat cross-legged and not a phone was in sight. Miller closed her eyes and curled her “r’s” as her felt-like voice sprouted into the crowd.

And the last time I saw Deer Scout was at an ice cream shop in Gowanus, just a few months prior. A 10-dollar ticket purchase provided a cup of ice cream of your choice. We sat in what looked like a kids’ playroom as Deer Scout colored in their set as a trio. Our legs crossed in silence, we swirled chunks of our half-melted ice cream around and around.

It’s been a year and a half since my first exposure to Miller’s music. And I was excited to catch up and chat about her early starts in Philadephia’s robust DIY scene, her views on community building, having parents who doubled as folk musicians, and the growth and cementation of Deer Scout’s new album coming out early next year.

Raised in New York, Miller spent a lot of time at Brooklyn DIY venues like Silent Barn and Death By Audio that hosted all-ages shows. “DIY to me is about being scrappy and egalitarian, and those are tough operating principles in NYC, so a lot of [those spaces] close after a few years,” Miller told me. “I have a lot of admiration for people who run DIY venues in New York and when they do manage to survive it feels kind of miraculous. New York is also huge and full of secret pockets and art worlds and people doing miraculous things I don’t know about.”

Having musicians as parents definitely helped. Her parents, Mark Miller and Beth Kaufman, were in the band Spuyten Duyvil, who were regulars at Philly Folk Festival until they went on hiatus a few years back. Miller remembers attending as a camper and seeing them perform as a child. The festival, which typically takes place on the Old Pool Farm in Upper Salford Township, has a loyal following. There’s lots of collaboration and spontaneous performances, it always rains and everyone covers themselves in mud, and the same volunteers, campsites, and bands come back every year, according to Miller.

“One year, my mom was feeling under the weather and I learned the Spuyten Duyvil set to sub for her,” she remembers. “Since then I’ve played as Deer Scout a few times. It’s one of my favorite places to play.”

During Miller’s first year at Haverford College, she started playing shows in Philadelphia. To her, the music scene was much more community-based than she’d experienced elsewhere; she went to lots of house shows, pledged a UPenn’s punk fraternity Pi Lam, and met her first bandmates, Nathaniel Borek and Ezra Zoreph at an open mic night at The Wooden Shoe, an anarchist bookstore.

“I wrote the first verse of ‘synesthesia’” at All Night Diner, a house venue in Philly I used to go to all the time freshman year,” says Miller. “It was a Shannen Moser show (one of my favorite Philly bands) and everyone was sitting on the floor, and I remember feeling like there was something so familiar about her music without being able to pinpoint it, but it reminded me of a specific time and place in own memory. The way memories are triggered by association when that association is a total mystery is really cool to me.”

Miller wrote the rest of “synesthesia” on the way back from the show. “The last verse is about coyotes howling at a train because they think it’s a really big coyote. The version on the [new] album features Andrea Asprelli of Cricket Tell The Weather on fiddle and harmonies, and I’m excited for it to come out.”

Sophomore year, Miller transferred to Oberlin, a liberal arts college in Ohio. There, she met a lot of talented musicians like Ko Takasugi-Czernownin, who played bass on most of the songs on her album and has been an influential collaborator ever since. After college, Miller moved to New York City and met current bandmates Weyman, and bassist Henry Munson, but a piece of her heart still belongs to Philly.

The band recorded most of the new album there with Heather Jones of So Big Auditory (and the band Ther), with whom Miller and friends played some of her first shows. Philly has so many show houses and businesses that let bands host in their spaces; it also feels like everyone is in one to five bands each. Meanwhile, in New York, it’s a little more of a challenge to be a musician there. And it’s less common to find and maintain these bubbles of DIY communities because space is sparse. In the midst of living in a bigger city where the scenes are so oversaturated and everyone is trying to make it, some sincerity is lost.

Writing and finishing a new Deer Scout album during the pandemic, in a way, rendered benefits for a final product. The album, halfway done before lockdown, put the band on pause for a while. Thus, its creation was piecemeal, with lots of recording from home, and cradled with a bit more intention. With no clear deadline, Miller had time to sit with her work, cut out parts, and decide to re-record whatever needed to be different.

Their album is coming out in early 2022, and I have a feeling that it’ll be as promising and humbling as their early roots.

Deer Scout plays with Ducks Ltd. and Foyer Red at The Broadway in Brooklyn on Sunday, October 10th; tickets and more information can be found here.