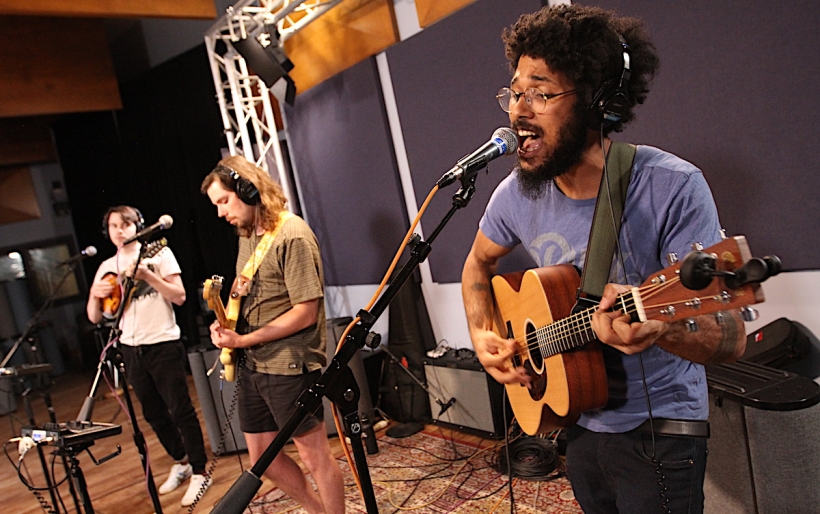 I first encountered the music of singer-songwriter Dante Robinson last spring, when he was a clear standout amid a flurry of Bandcamp Friday recommendations. It was heartening every month during the pandemic to watch musicians show up for their friends, RT-ing the links to everybody’s new singles and plugging their projects on IG stories that spread far and wide. The music community felt like a for-real community, even as we were all in forced isolation.

Something about Robinson, though, struck a raw emotional nerve. Part of it was the windswept atmosphere, the pensive mood that echoed the frightened uncertainty of our shared moment in history. Part of it was impressionistic lyrics about vampires, oceans and waves, achieving the same effect as those haunting instrumental arrangements. And part of it was that the music was simply damn good: classic indie-folk singer-songwriter structures and melodies in the spirit of Sufjan Stevens and Bright Eyes, performed passionately by a group of friends affectionately known as The It’s Lit Family Band.

Prior to the pandemic, Robinson fronted the punk four-piece Vague Advice; his work as a solo artist emerged, not entirely accidentally, but definitely unexpectedly. While the players he got to execute his vision for the EP on a hotel bed you paid for have roots in local DIY scene staples like Humilitarian, Junonia, and Rally Point, the sound they make collectively is of another plane, and the Family Band debuted it for an audience this June at West Philly Porchfest. It was a stellar set, but Robinson is quick to note that it won’t become the norm for he and his collaborators.

The time spent focusing on establishing himself as a solo artist, he tells us, left Robinson feeling like he was neglecting his primary band, which is why his next round of gigs — including one November 13th with The Lunar Year — will be with Vague Advice. He says The It’s Lit Family Band will remain active for more informal things: social media covers, random pop-ups, and the like. Basically a whatever-we-feel-like-doing scenario with minimal pressure and maximum enjoyment of one another’s company and talent. Remember that word community? It’s an operating principle here.

All the same, we’re beyond elated that we were able to capture the full compliment of Dante Robinson and The It’s Lit Family Band live in WXPN Studios for our first newly-recorded session since March of 2020. A nine-piece band out the gate — we didn’t even work our way up to it, just dove right in! On these recordings, you’ll hear Robinson and Nick Tate on guitar and vocals, Jeff Croce on mandolin and vocals, Alyssa Almeida on cello, Eli Glovas-Kurtz on bass, Chris Matusik on drums, Jake Rolf on keys, Tucker Pendleton on trumpet, and Patchy McElroy on harmonica.

Watch and listen below, beginning with a video of an unreleased song with the working title “Fallelujah, Hold My Hands.” If you like what you hear, pick up on a hotel bed you paid forhere — perhaps during the next Bandcamp Friday.