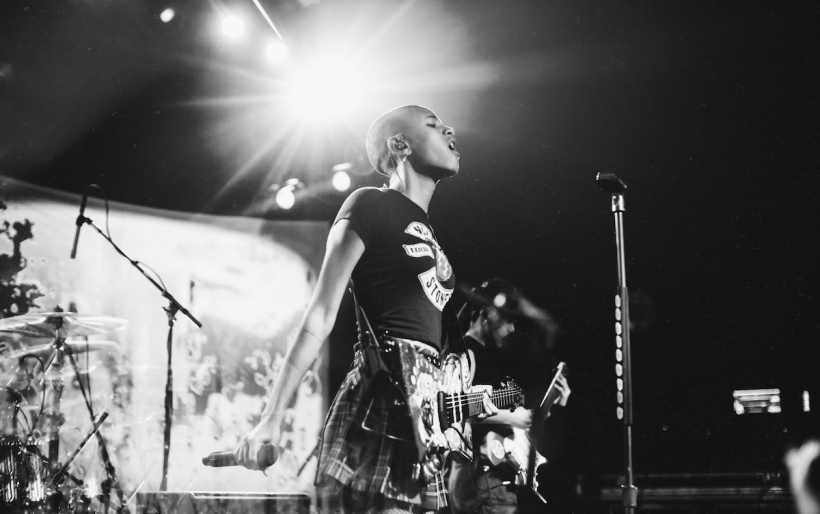 A night of high-energy punk with Willow Smith and friends

This summer, Willow released her fourth studio album lately I feel EVERYTHING, and since then the young rock star has been traveling across the country on her Life Tour, causing explosions of rage with her music in every city she performs at. Yesterday she made her way to Philadelphia, a city that Willow considers a second home since her royal music bloodline is a part of the city’s rich music culture. So it was only fitting that Willow gave Philly an awesome night of punk and rock music at The TLA.

The show started off with Sara Keden, Sabel, and Rebecca Webster, best known as Kid Sistr. The quirky rowdy energy of the New York music trio got the crowd amped up. Their charisma spread through the TLA like a surge of electricity when they performed songs “Please Dump Him,” their new single “Palpitations,” as well as covering Led Zeppelin’s “Immigrant Song.” Up next was De’Wayne, who turned up the volume of the energy in the venue to new levels once he got on stage and performed “National Anthem.” The rapper / rocker from Texas had the confidence and stage presence similar to Prince and Lenny Kravitz. Like Kid Sistr, De’Wayne used his set cover a classic rock song and his choice was “I Wanna Be Your Dog” by The Stooges. Philly was very receptive towards De’Wayne, so much that the crowd was ready to rage and start a mosh pit once he played “Stains.” The performances from both Kid Sistr and De’Wayne set the stage for Willow finish the night of shredding in South Philly.

Willow came on stage playing guitar and got right into shenanigans, starting the night off with “transparentsoul” and having everyone (including myself) singing every word. She shouted out her grandma who was in attendance, saying she had family in the building supporting her — and based off Jada Pinkett-Smith’s Instagram stories, that may have included her mother too! Willow then went back into rocking out with the TLA by performing songs from the new album like “Gaslight,” “Grow,” “Don’t Save Me,” “Lipstick,” and “Come Home.”

I’m not sure if the new music has boosted Willow with a rebellious attitude, but the crowd loved it and even got hype when she sparked up a joint on stage. Willow then made sure to bring some guests like Philly’s own Tierra Whack when she performed “Xtra” for the first time on tour. Frequent collaborator Tyler Cole also came out when they did tracks from The Anxiety like “Meet Me At Our Spot,” “Hey You,” and “Fight Club,”  igniting the fuel for more mosh pits and rages. Willow even got on the drums to do the “F*** You” interlude, performed a killer rock version of very first single “Whip My Hair,” the ended the night with “Wait a Minute.”

Willow’s homecoming show was an overall crazy night of good punk and rock music at the TLA. Every artist had amazing musicians accompanying them on stage, and no matter how rowdy it got, the performers made sure no one got hurt due to turning up. It was good vibes and good music in Philly and it was all thanks to Willow Smith and friends.