Full Bush talks about their new EP 'Movie Night,' out in December with release show at Johnny Brenda’s - WXPN | Vinyl At Heart 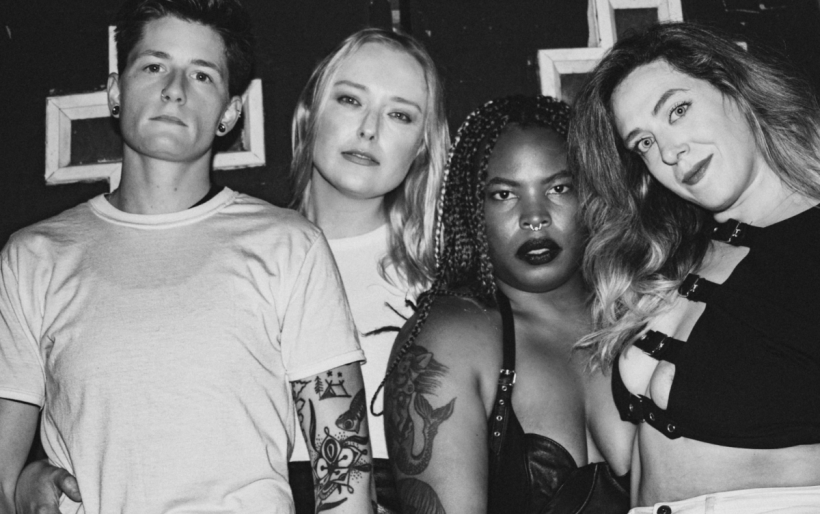 Full Bush | photo by UV Lucas courtesy of the artist

Full Bush talks about their new EP ‘Movie Night,’ out in December with release show at Johnny Brenda’s

Hard rock is making a popular comeback, and here to lead the charge in Philadelphia is Full Bush, a powerful foursome channeling their personal challenges into screaming, thundering noise. Their new EP Movie Night is slated for a December 3rd release via Brutal Panda Records, with leading, titular single “Movie Night” out today with accompanying music video.

“Movie Night is about what it feels like when people project their insecurities onto you instead of addressing their own shit,” says the band via email. The whole EP represents a growth in the band and the members themselves. “We acknowledge the pain that was caused by our trauma responses, gaslighting assholes, or turbulent relationships. Sitting in and confronting the discomfort of necessary internal shifts and letting go of what doesn’t lift us up, support us, or love us in all the beautiful, fucking flawed ways we are as humans.”

To celebrate Movie Night, Full Bush is unveiling a new merch campaign with interpretations from three different artists of the question, “What does change mean to you?” The three black and white illustrations show bodies bending and stretching, enmeshed with nature. The designs, by artists Marian Bailey, Theresa Baxter, and Eva Martinez-Bond, are available to purchase on t-shirts via Full Bush’s Bandcamp. All profits from the sales will be donated to Morris Home, Loveland Foundation, and The Innocence Project. “Quarantine times might be over,” says Full Bush about the inspiration behind the t-shirt project, “but we can only get through together by educating ourselves about each other, empathy, continuously challenging our patriarchal systems, and mobilization through mutual aid.”

Read on for a short interview with Full Bush members Adesola Ogunleye, Jay Rutter, and Cassie O’Leary who shared with XPN the process behind making Movie Night, from its inspiration to the recording studio. The EP is available for pre-order here.

The Key: You all have life-altering stories that influenced you to write Movie Night. Would you say the writing and now release of this record has been a cathartic experience? What issues were you able to resolve through Movie Night?

Adesola Ogunleye: Yes, for sure. The album was actually a way to complete a chapter with Kate [the band’s lead singer] who had decided to leave (she’s back!) so that the remaining three members could create a new body of work. The songs were written while we were all going through what i like to call “hard turns.” My divorce coming to an end, but celebrating that my ex saw me in a way I always wanted. Kate working on her inner child, Cassie saying “fuck you” to a gaslighting person, and Jay working through some shit in their previous relationship. It all just so happened that we recorded during a life-changing time for humanity as well, and we have all come out on the other side with more nuanced clarity.

Jay Rutter: I don’t know that there was “resolve” as much as space to process. This album specifically gifted me with perspective from my band mate’s experiences with mental health, relationships, inequity, and their passion for the music we create together.

Cassie O’Leary: Oh hell mother fucking yeah. Writing “Movie Night” helped me see that, sometimes, people are going to put whatever it is they’re struggling with, unhappy about, or feeling guilty about, onto you. We all do it. The shift for me was going from being someone who internalized projection as something that I did wrong to someone that could see projection as something that takes place when people struggle with their own insecurities.

AO: We recorded with Dave Downham at Gradwell House Studios in Haddon Heights, NJ. We fucking love Dave so much. He also did our full length s/t album. He’s disarming, helps us brainstorm how to approach things if we’re stuck, and looks at us as musicians and not just “oh look! women! Riot girl band, here is what they’re gonna do,” which we get all the time. We are proud of who we are, our identities, and the beliefs we live out in many ways in our lives. We want to be seen as musicians who made some wild music that people connect with. Not judged by what might be between our legs.

Recording was great because we got to do it in a more traditional sense where we tracked each instrument individually. Which means we took our time, added more layers, experimented, took things out that didn’t work. It was also strange because we all weren’t present when things were getting tracked so it was kinda like “I hope I did that right and the band likes it.” hahaha

JR: It was flavorful. This album truly came from various attempts that taught us a lot about the process and how we would like to continue recording in the future. It started in my parent’s garage attic where we have a decent studio setup, but no professional to aid in the actual recording process.  Then it was all digitally produced at my house on my Mac through Logic, but once again, not the sound we were trying to achieve. We finally landed on doing what has worked in the past and what we knew we could accomplish the sound we were looking for. We went to Gradwell House Recording studio with Dave Downham and the songs just came to life in the way we had hoped they would when we began the process. Studio time is always magical–it truly allows you to hear the nuances that some of the best home speakers don’t allow you to dig into and from there, we added some of the sections/notes/moments in songs that, to me, really make the EP.

CO: We wrote all of the songs 2-3 years ago and have been playing them at shows ever since. Once it was time to record, it was like, “Oh, I want to change this. I want to change that. Let’s add something here,” etc. It was during the aftershocks of the initial lockdown when we started driving out to Jay’s mom and dad’s house to lay stuff down. Then we were like, let’s go back to Dave at Gradwell and record this for real. So we did! It was way different this time because we recorded in chunks as opposed to live like we did for Full Bush. We all went in separately and recorded our own parts. We had to own it and it was scary.

On December 16th, Full Bush will play Johnny Brenda’s for their record release with friend UgLi and Kelsey Cork & The Swigs. Songs from Movie Night and others that will be included in a full-length release next year will be featured on the setlist. You can buy tickets now via the XPN Concert Calendar.