Modular On The Spot: A picnic for modular synthesis lovers and learners, in Philly and around the world - WXPN 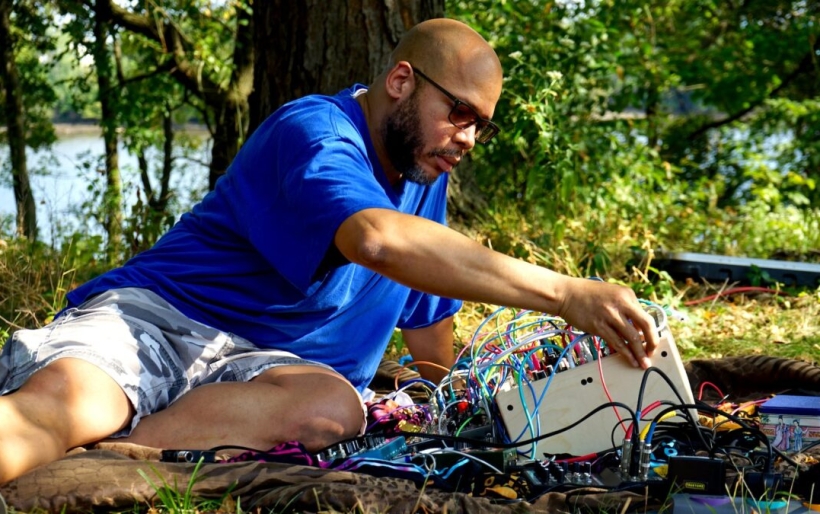 Modular On The Spot: A picnic for modular synthesis lovers and learners, in Philly and around the world

Month after month for almost five years now, Philadelphia musicians, listeners and technicians have gathered outside for Modular On The Spot. MOTS Philly is an outdoor event series that invites electronic musicians and curious crowds to different locations around the city to participate in what host Jerry Kaba calls less of a concert, more of a “picnic for modular synthesis enthusiasts.” Inspired by similar events in other cities around the world, the free gathering usually takes place on a Sunday afternoon at the end of each month; the next will be Sunday, October 24th.

Kaba devised the first MOTS Philly meetup in 2016, and he’s collaborated along the way with fellow synth-lovers Stefano Daddi, Chaka Benson, Chris Powell, Sandy James, Richie DeCarlo, and others. I first discovered MOTS myself this June in Fairmount Park, where I quickly got curious about how the series began and what kind of community had formed around it.

The modular synthesizer is still a niche instrument, and it looks out of place in a public space – especially on a picnic blanket. They’ve existed a few decades, but most have historically been housed inside labs, studios or universities. According to Kaba, it’s only become common in the last ten years for amateurs to assemble and explore the systems in their homes. (Quarantine, though, has prompted many homebound musicians to dig into practices like this.) The instrument is comprised of many different ‘modules’ which its builder can collect and arrange, connecting them with ‘patch cables’ so the whole system looks “like one of those old telephone switchboards,” Kaba describes.

One module generates an audio signal and sends it through the other modules in the ‘rack,’ which all sculpt and complicate the signal in their own ways, before it finally reaches the speakers and the air. Every musician designs their own rack, patching together their favorite modules to produce the sounds they like best – techno patterns, aggressive noise, smooth ambience – and they might even rearrange the whole system between performances.

Exploring modular synthesizers takes patience, with plenty of awkward trial and error expected for newbies. “Modular can be a somewhat isolated pursuit in general, and get really technically focused,” says MOTS Philly regular Stefano Daddi. The racks get finicky, complex and physically cumbersome, so many musicians have to keep them at home like furniture. All this makes rare opportunities for public sound-sharing even more crucial to the small community of creators working with these machines. Hauling them outside seems absurd, but many MOTS fans agree this only adds to the series’ appeal.

The first ever MOTS, Kaba notes, took place along the Los Angeles River in 2015, hosted by Eric Chelsak (aka Rodent516) and Bana Haffar. The two musicians got inspired to share the modular experience outdoors after, on an Arizona camping trip, they found themselves beside a campfire with a portable generator and a modular rack. Soon they were hosting regular events on the West Coast, posting videos online, and modular fans from around the US began to follow suit: Kaba contacted Chelsak in 2016 for advice on how to get the Philly series started, and the two have become close friends and even performed shows together in the years since. By now, enthusiasts have hosted MOTS in cities all across the country – Seattle, DC, Asheville, Austin, Milwaukee, San Diego, Philly – and around the world, including in Mexico, Japan and South Korea.

MOTS events in different cities are independent, but they share a name and three simple rules, Kaba clarifies. “1) It’s always free. 2) It’s always outside. 3) You always ‘keep it in the rack,’” which means the only instruments allowed are modular – no keyboards, drum machines, computers, microphones, or other devices that patch cables can’t reach. Some musicians see this rule as a barrier, he admits, because modular gear is expensive and so few musicians have the expertise. But MOTS hosts feel the rule is necessary in order to keep the series working the way it does: as a special space for exploring the quirks and challenges of modular synthesis in public, without judgment or pressure.

Communal learning is a key component because everyone here is still figuring things out, says Christopher Powell, who has been involved with MOTS Philly for about three years. “By using just modular gear, it encourages a conversation about how each performer does what they do and why. Everyone uses this stuff in a very different way, [so] we all learn at all the shows. It’s a focus on ‘process’ which is unlike most other musical performances.” While planning the events, Kaba and his collaborators don’t even treat MOTS like a ‘concert,’ as much as a space for sharing ideas. “We do have performances, but there’s not really a hierarchy,” he explains. There is no stage, so performers and listeners are all welcome to sit on their own picnic blankets or stand and walk around any time. “There’s also an aspect of it kind of like a car show, where people come around, ask about everyone’s different systems (I like to say ‘nerd out’) about the gear itself.”

While only certain instruments are allowed, all levels of experience and inexperience are totally welcome at MOTS Philly, assures Kaba. “We love it when a lot of people’s first time ever playing in front of people is at Modular On The Spot – I can’t tell you how many people this was their first time ever – cause it’s not really about preparing a big piece and rocking, it’s more about just having fun with no pressure on you […] We’ve had people who have barely ever touched one that basically just sat there and made fart noises on the thing [laughs] and people all loved it! We get it, no one is there to be wowed, we’re just there to have a good time and share this experience, you know?”

Regular listeners and players at MOTS Philly find the atmosphere totally supportive and relaxed, even for newcomers. Chaka Benson says modular synthesis “all seemed impossible” when he first started building a rack in 2015, but he’s become a regular at MOTS and he’s comfortable performing there because “everyone wants to see each other do well.” Some musicians arrive on the scene with more skills, including Stefano Daddi, who started learning about modular gear in high school while he was working at Bluebond Guitars in South Philly. Sandy James was already teaching a course on analog and modular synthesis at Temple University before UPenn’s Eugene Lew connected her with Daddi and Kaba – Daddi and James have even co-hosted Temple’s Summer Synth Meet several times.

Modular musicians bring all their own styles to MOTS Philly since they get no guidelines on how to play, except to keep it between 10-20 minutes – and to keep it ‘in the rack’ – which allows enough time to “have a conversation with the machine,” as Benson puts it. “That format really encourages exploration and trying out new directions,” says Chris Powell. “I tend to perform mostly melodic and bouncy stuff but I’ll go for far out drone zones or rhythmic noise depending on the day.” Sandy James describes her sets as “peaceful, organic and reverberant,” while Stefano Daddi tries “to create relatively abrasive sets. I focus on drone music, single clusters of static notes with morphing harmonics.” Kaba says one response he hears from newcomers who are unfamiliar with the format is that “every single person who played sounded completely different. That’s one of the interesting things about modular is that there’s not really a defined modular sound.”

Sometimes the surrounding environment even informs the musical experience at MOTS. “At a few MOTS performances, it has seemed that the insects were listening and responding to the music,” James remembers. “We’ve done them in parking lots and on piers full of broken bottles. It was really interesting how the synth sounds matched the sounds of the ships and wind at the MOTS on the pier.” Players feel these gatherings put them in touch with nature in a way that’s unachievable while working with modular gear at home, Kaba notes, while regular attendees are excited to discover new public spaces in the city by following MOTS wherever they travel.

By now, they’ve popped up all over Philadelphia: The Woodlands cemetery, the Please Touch Museum, Bluebell Park, Vox Populi Gallery, Little Berlin, Pilot Projects, along the Delaware and beyond. The events are peculiar, Kaba knows, but safe and accessible as possible, and they’re not designed to disrupt. Sometimes they get a permit approved, but sometimes they run it “renegade style,” aiming for parks where communal events are already in the culture, and expecting that other folks might be grilling food or playing music a few paces away – they’ve even received invitations to play in some spaces, including Bartram’s Garden. Rain has posed a challenge before, but attentive crowds pitch in to protect each other and the instruments when needed. “A few people wanna do one in the snow when it’s freezing out – visually it would be amazing, but it would also be a nightmare [laughs].”

Kaba hopes to keep finding new destinations in the future, including Mount Moriah Cemetery, FDR Park, and maybe an overnight camping trip as far out as the Pine Barrens. Regulars I spoke with offered plenty of ideas too, including the Navy Yard, the Manayunk Canal, Race Street Pier, East Passyunk Ave, even in a moving vehicle. Most events have happened in the daytime, but they might soon host more at night to help incorporate modular video synthesizers into the scene.

With no grand scheme, Kaba says every MOTS is totally free to evolve, as long as they stick to these three original rules – always free, always outside, always in the rack. Though MOTS in other cities might look different, Chelsak and Haffar’s model remains a blueprint, with a focus on building community between curious listeners and erasing hierarchy between newcomers and experts. Chelsak, now based in Asheville, is grateful to see so many cities take on the project and bring new explorers into the modular world. He loves “seeing people who aren’t into modular show up to MOTS, get inspired to build a modular by what they see at MOTS, then return later and share patches at MOTS and release music and play club gigs! This makes it all worth it. I’ve seen it happen to several people over the years.” Since MOTS Philly began in 2016, Chelsak has even traveled from his home in Asheville to perform here, while Kaba, James, and others have made regular trips to MOTS meetups in other cities – where all are welcome to come listen.

The next Modular On The Spot Philly will take place on Sunday, October 24th from 2 to 4pm, with location to be announced. Follow @modularonthespotphilly on Instagram for more information.