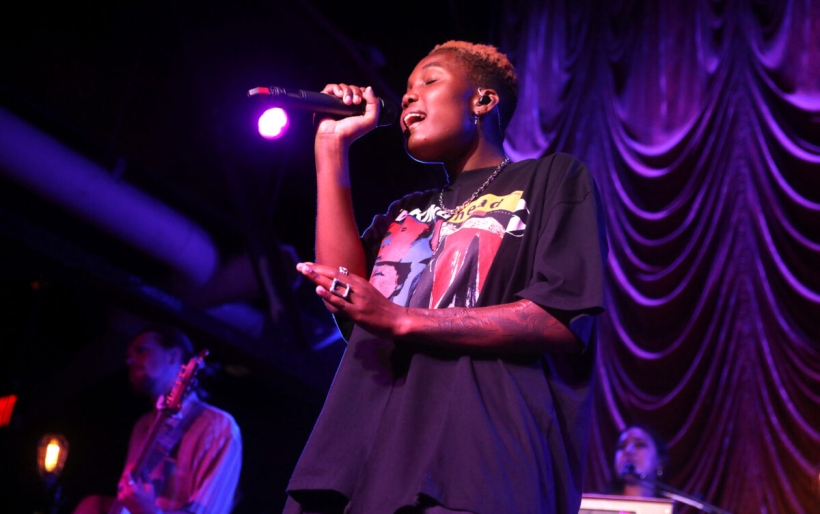 After a particularly emotive performance of her breakout song “Black Dog” last night, Arlo Parks scanned the devoted crowd in the front rows of The Foundry: eyes locked, lips sealed, totally engaged and in the moment with the London singer-songwriter.

“That felt like being hugged while sharing something really difficult,” Parks told them. “Thank you for that.”

There were moments of transformation and connection all throughout Parks’ sold-out Philly debut last night. Her Mercury Prize-winning album Collapsed in Sunbeams presents songs about deep themes like loneliness and alienation — and deeper still themes of addiction and suicide — in a manner that is moving and empathetic, but also radiant and uplifting. This isn’t the more common approach of taking a sad idea, singing about it in a jubilant way, creating a false dichotomy — Parks’ is a much more nuanced approach where her writing broaches difficult topics, acknowledges the difficulty, and works through to a place of healing and serenity.

After playing “Cola,” a deep pull from her 2019 debut album Super Sad Generation that slinks to a trip-hop groove, Parks said “I wrote that song when I was 17, and to me it always represented banishing negative energy from your life.” That’s how Parks carries herself as a front person — not standing stoic and wallowing, but kicking and leaping around the tiny Foundry stage, dancing and grooving with her bandmates. Joined by James Fernandez on drums, Sam Harding on bass, Dani Diodato on guitar, and Madeleine Jones on keys, Parks took the songs, and I don’t want to say re-worked them, but amplified their existing structure to bring more punch and power to the room — who were already inclined to sing along, especially on a soaring and chills-inducing rendition of “Caroline,” but now even moreso.

The gig marked not only Parks’ first-ever Philly performance, but the last show of her North American tour, and one where she had family in the house. “It means so much to fill up a room like this,” she said. “Thank you for being here.” The set swung through the stellar pop of “Portra 400” to the haunting acoustic “Angel’s Song” and the dynamic main set closer “Super Sad Generation,” where everyone in the band leaned in, Parks swipping from croons to spitfire bars, her bandmates taking solo after solo, and the collective bringing the main set down with a bang.

After that, what do you do for an encore? There couldn’t have been a better note to close the night and encapsulate all its themes — not to mention the themes of Parks in general — than “Hope,” where she sings “We all have scars / I know it’s hard / you’re not alone.”

Check out a photo gallery and setlist from the show below; Arlo Parks returns to Philly this February when she’ll play The Fillmore Philly opening for Clairo.