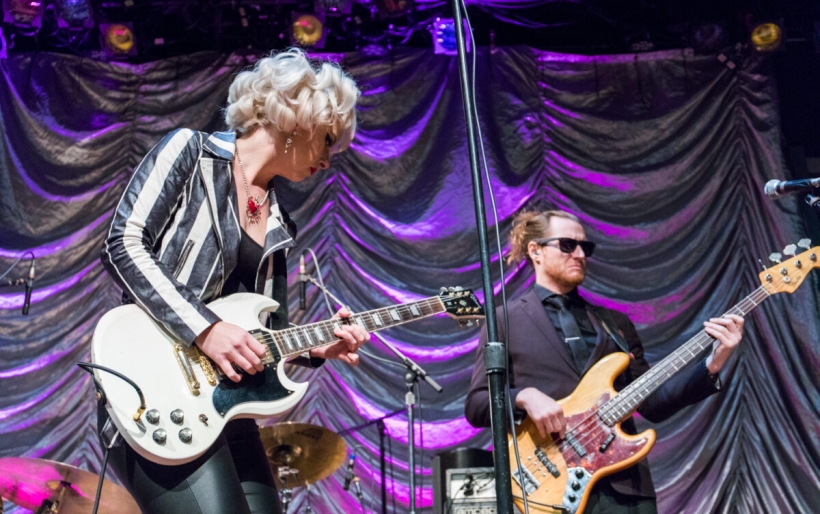 From veteran rockers and XPN favorites to emerging artists and stacked Philly bills, this first week of November is showing that the eleventh month of 2021 is not slowing down in the live music realm. Here are 16 concerts to see in the next seven days, beginning tonight with a terrific double bill at Union Transfer.

Enjoy a night of easy-listening on Monday at Union Transfer with Tennis and Molly Burch. The romantic, nostalgic pop lineup will have audience members swooning as they sway along to each set’s underlying R&B rhythms. If this critic had her way, Tennis would be opening for Molly Burch, not the other way around. But that distinction hardly matters when you arrive early for shows no matter what–which Philly fans should get used to doing if they care about music discovery. No matter the order of the sets, fans will leave this show starry-eyed and with a burst of love to fuel the work week. // 7 p.m., $20, AA // TIX + INFO – Paige Walter

This bill stood out among a list of many others hosted at City Winery, and not just because it’s listed three times (for dates 11/2, 11/3, and 11/4). It’s a show that could easily be hosted at Union Transfer or another music hall of higher occupancy, but instead will be enjoyed at a sit-down venue and paired with many glasses of fine wine. If you agree that vibe fits Stephin Merritt’s songwriting, limited tickets are still available for all three nights. The Magnetic Field’s special City Winery residency will also feature singer/songwriter Christian Lee Hutson, a close collaborator of Phoebe Bridgers and prolific songwriter in his own right. // 8 p.m., $55, 21+ // TIX + INFO– P.W.

A terrific run of hooky indie-punk singles last year gave way to Death of a Cheerleader this year, the stellar debut album by Brooklyn’s Pom Pom Squad. Led by singer-guitarist and songwriter Mia Berrin, the band’s range encompasses a rager based on The Virgin Suicides (“Liz”) to a soaring cover of “Crimson And Clover.” They open the show for Nada Surf at World Cafe Live this week, so arrive early and stay late for a hit parade of shimmering power pop. // 8 p.m., $26, AA // TIX + INFO – John Vettese

Perennial favorites in the XPN universe, Old 97s bring their first tour since before COVID times to Ardmore this Wednesday. Last year the band released their album Twelfth — guess where it lands in their discography! — and it’s a lively mix of what they do best: a little bit country, a little bit rock and roll, a lot of sweat. // 7:30 p.m., $30, 21+ // TIX + INFO – J.V.

This lovely bill was made for the lounge at World Cafe Live, which characteristically hosts some of the most charming and technically-proficient talent in Philadelphia. Tubey Frank is the rabble-rouser of the group; his supergroup-style rock band impresses fans of all backgrounds. Justmadnice, on the other hand, performs a relatively stripped-down set that showcases their unbelievable vocals, and on this bill, will help set the mood for Eden’s soft, romantic finger-plucked tunes. The advantage of catching these artists at World Cafe versus, say, their regular Ortlieb’s, is the opportunity of enjoying the show in a “listening-room” type setting, complete with cocktails and table service. // 8:30 p.m., $14, AA // TIX + INFO– P.W.

XIXIX’s (pronounced “six, six”) first show ever was a couple months ago at Sunflower Philly, which ended up being canceled after the headliner was exposed to COVID, then rescheduled as a free event with just XIXIX and friend Sean “Danger” Smith. Not expecting many people to still show, the band was overwhelmed by the numbers in the crowd. Now, at Ortlieb’s, XIXIX celebrates the release of their debut LP with band members Mike Sanzo of The Dawn Drapes and Arjun Dube of Trap Rabbit, among others. Born Losers Records’ Catherine Moan opens the show with Jerry, At The Beach, a New Jersey rock band steadily building a crowd in Philly. // 8 p.m., $12, 21+ // TIX + INFO– P.W.

It will be a shock if PhilaMOCA is still intact after Godcaster’s EP release show. Known for their unhinged performances and wild antics (once they lit fireworks off in a basement while filming a video), the art-rockers turn every show into a spectacle. Thrashing around as they play, speeding up every song, and convulsing on the stage, there’s an almost religious-like fervor to the band. // 8 p.m., $15, AA // TIX + INFO – Samantha Sullivan

Get your folk on this Friday when the Colorado progressive bluegrass five-piece Yonder Mountain String Band plays Ardmore Music Hall. Their last album was 2017’s Ain’t It Love, but this isn’t a band who needs albums as a reason to tour: expect lively covers, wandering jams, and lots of fun. // 8 p.m., $29, 21+ // TIX + INFO – J.V.

Hot off a couple gigs at Gainesville, Florida’s legendary punk gathering The Fest — one covering No Doubt, one showing off their new record Nice One — Philly ska heroes Catbite are back in town this Friday. Welcome them back by turning up early for their opening set at MilkBoy, where Nathan Grey of DE hardcore icons Boy Sets Fire headlines. // 8:30 p.m., $12, 21+ // TIX + INFO – J.V.

After two sold-out shows at Union Transfer last month, Big Thief rested for maybe a day or two. Then songwriters Adrianne Lenker and Buck Meek prepared to get back on the road again, this time performing their respective solo material. Buck Meek plays his Philadelphia-area show first, at Johnny Brenda’s this Saturday. The unassuming but commanding lead guitarist for Big Thief writes his own poetic folk music guided by his intimate understanding of and bodily connection to his instrument. Anyone else who has been waiting for this one for too long, come meet me at the show. // 8 p.m., $15, 21+ // TIX + INFO– P.W.

It’s been a while since we last heard from local favorites Lylyly. They released their debut self-titled record on DIY label Goodhowareyou Records over a year ago, and have been relatively quiet on social media and laying low around town ever since. Call it taking time off or quietly building hype; either way, their fans will be happy to see them return to the stage. Labelmates and openers The Crumble Boy are also celebrating a release, and their brand of soft rock reminiscent of Bill Callahan will complement Lylyly well. Newcomers Glitterspitter start off this once-in-a-blue-moon type show. // 8 p.m., $10, 21+ // TIX + INFO– P.W.

Indie singer-songwriter icon Kristen Hersh is a consummate storyteller. Her 2016 album Wyatt at the Coyote Palace was released as a book and album, as was Purgatory / Paradise, the 2013 release by her three-decades running band Throwing Muses. She’s released several albums both as a solo artist and band leader since then, and her most recent offering is her third memoir, Seeing Sideways: A Memoir of Music and Motherhood, an impressionistic collection of vignettes that find her navigating life as a parent and a working musician. Hersh’s live shows typically reflect all sides of her creative self, and we expect that this weekend’s Kung Fu Necktie gig will be no different. // 7:30 p.m., $20, 21+ // TIX + INFO – J.V.

Sunday 11/7: The Flaming Lips at The Fillmore

One of the strangest and most inventive bands of the 80s through the present will be in Fishtown this Sunday. Known for their breakout into the mainstream in the 90s and 2002’s Grammy-winning Yoshimi Battles the Pink Robots, as well as modern collaborations with Miley Cyrus and Kesha, The Flaming Lips have made massive contributions to the alternative rock genre. Fans worth their salt likely have seen this group before, but first-timers are going to be shocked by the Lips’ over-the-top theatrical performance. Barrier to entry: you must have let at least a single tear escape when listening to “Do you realize / that everyone you know someday will die?” from their hit “Do You Realize??” // 8 p.m., $48, AA // TIX + INFO– P.W.

Channeling New York’s disco era on their latest single, “Somewhere They Can’t Find Us,” Habibi promises to deliver casual glamour. Possessing the same sheen of any famous 60s girl group and the dangerous edge of retro-rock stars, they sound like a risque version of The Shangri-Las: glitzy-noir that is sure to translate on the dancefloor. // $12, 8 p.m., 21+ // TIX + INFO – S.S.

Once a raw blues ripper, Kansas City’s Samantha Fish lays on a bit of pop sheen on this year’s Faster, her seventh LP. Fish wears the bigger, bolder sound well, still plays like a beast, and this Sunday night show at Union Transfer will be a perfect way to close the week with a bang. // 7 p.m., $25, AA // TIX + INFO – J.V.