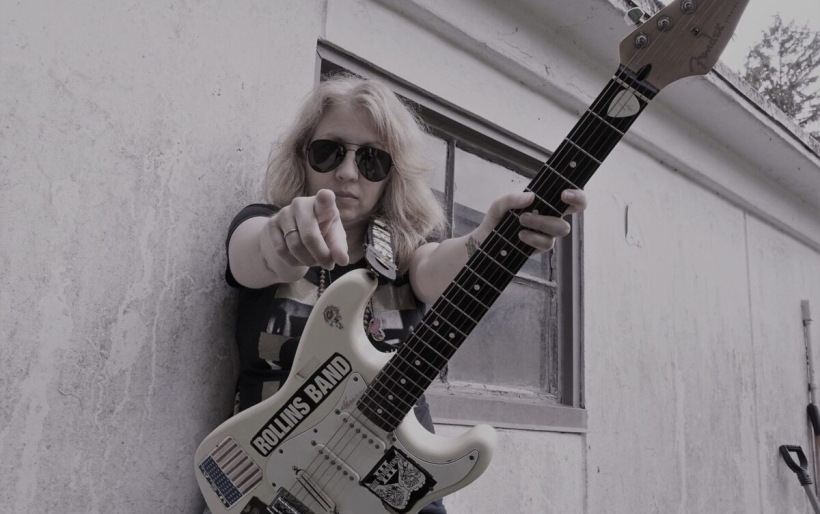 Going back a couple decades, and Philly rocker Lisa Flynn was at the center of the late 90s / early 00s indie-punk scene in Philadelphia. Flynn worked behind the scenes at the legendary Trocadero and its Balcony Bar, she co-founded the Sugar Town women-in-rock series with Philly DJ and music writer Sara Sherr, and she fronted the badass rock band Lisa Christ Superstar, which this week is releasing its first album in 20 years.

Flynn has remained active in the years between, of course; she and her husband and drummer Eric Perfect played in the raw and grungey Workhorse III for many years — listen to their Key Studio Session here — she occasionally put on shows, like her Mistresses of Meyhem event at Connie’s Ric Rac, and she played on the all-Philly lineup for The Trocadero’s last show.

But Lisa Christ Superstar was due for a return, and in my conversation with Flynn on the XPN Local Show, we learn why. We also find out about their new album Soundtrack To The Floating World — out on streaming services this Friday — and the release party they have planned for this Saturday night at The Fire in Northern Liberties. All this amid a flurry of vivid memories of navigating the indie scene alt-newsweekly listings, climbing the very steep staircase to The Trocadero’s Balcony bar, and the first Lisa Christ Superstar album from the early aughties that has been lost to sands of time.

Listen to our whole conversation, read highlights below, and watch music videos for Lisa Christ Superstar’s “Silencer” and “I’m Going Under.” For a deeper dive, check out Flynn’s chat with our friend Dan Drago on the latest episode of the 25 O’Clock Podcast.

…on the early 00s scene at Sugar Town, The Troc and beyond.

It was electric. It was great, you know, I had played in one other band before that called Savage 3D, and this was back when you’d bounce back and forth between Nick’s and The Khyber, and then you’d go to The Firenze around the corner. And then I started booking, I got an awesome opportunity to start booking with Jon Hampton at The Trocadero. I did The Balcony, The Troc, I learned how to settle shows, and we did the North Star as well.

And the bands that rolled through, learning the other side of the business like that — I wish we had iPhones back then to be honest! We had so many fantastic bands up there, I put Fear up there, Mastadon’s first [Philly] show was there, Avenged Sevenfold I did up there, Wayne Kramer I put up there, Sara and I did Ari Up [from The Slits] up there, we did Yeah Yeah Yeahs back at Sugar Town. It was great because I wanted to learn that other part of it, but it did take from my performance end; I couldn’t play as much because I was working every night.

…on how Lisa Christ Superstar differentiates from her other bands, and why she’s bringing it back.

We have a lot of different influences, and I think that really comes out in this new record. In Workhorse III, we really opened things up, we weren’t involved in playing the punk shows anymore. And on this record with Lisa Christ Superstar…I love pop music, you know? I love country stuff. And I really wanted to try out some new styled songs I’ve always had written, and I was like you know what? It’s about time I put them out.

We had the record written, and then last year — I’m fine now, but I was diagnosed with breast cancer. And I’m also a nurse during the day, so when COVID hit, and I had my diagnosis and my surgery, it changed my views on a lot of things. And it really made my final decision to change the name of the band and go back to Lisa Christ Superstar. Because I’m like, you know what? I’m not gonna take shit from anyone anymore. This is me, this is my life. And it did change the trajectory of some of the songs on the album, which I’d written before my diagnosis and going through working in the hospitals through COVID. All my friends are at home, and nurses, we have to drive in to deal with this invisible beast. It kind of put my life into perspective.

…on the single “Silencer” and its music video.

We shot the video in our shop, Cadillac Tattoo. And the song is basically about, I know a lot of girls or men go through this, they’re in a relationship with somebody and they don’t let them talk, don’t let them tell their feelings. If they do, it’s going to be this whole fight. And the song is basically how somebody gets fed up with that and they don’t want to live with that anymore. They have a voice, they have a strong voice, and they need to get away from that toxic person in their life.

We had a lot of fun making the video, and I wanted it to get across that [point] — especially a lot of young women, and women all over, they have a voice and they shouldn’t silence that voice because a man is going to scream at you, or whatever. Or vice versa! You voice shouldn’t be silenced because somebody doesn’t want you to talk or whatever.

…on the pet-centric video for “I’m Going Under.”

So I had lyrics written for this song. And then…I’m a fur baby mama, and our Harry passed away, our little poodle, the night before Thanksgiving last year. And I changed all the lyrics and dedicated it to the loss, and people losing their pets. For the video, I had our fans send pictures of pets they’ve lost in the past, and we had that scattered throughout the video as a tribute to them. And that’s what that song is about, dealing with the loss of basically your best friend.