11 releases from Philly artists to support on Bandcamp Friday - WXPN 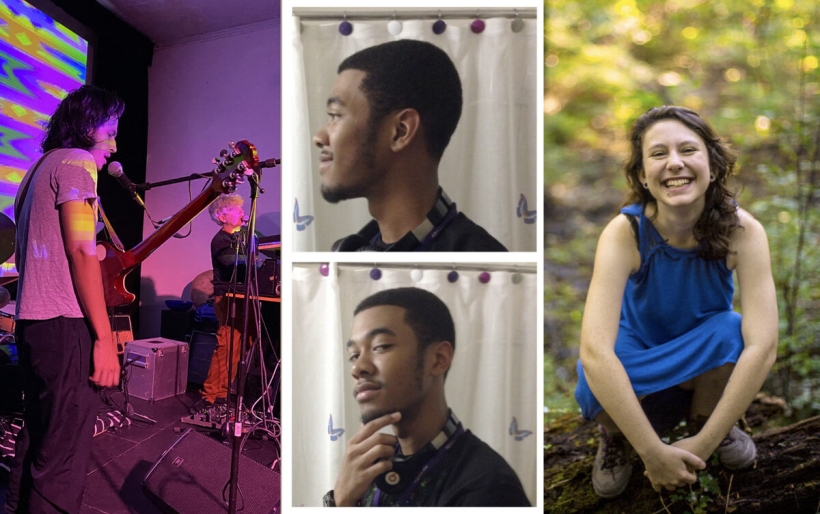 Flanafi with Ape School, Magnetic the Shamen, and Rebecca Zimmerman

11 releases from Philly artists to support on Bandcamp Friday

We don’t know how much longer Bandcamp will continue offering their Bandcamp Friday fundraisers, now that the light at the end of the pandemic is closer than ever. Our solution: shop each Bandcamp Friday like it’s the last. As we write this, we’re about halfway through the November edition of the monthly fundraiser where the digital music retailer waives its fees — directing all proceeds from sales to artists and their labels as they continue to recover from the industry shutdown. In other words, you have just over 12 hours to listen up to our recommendations, shop local, and support your scene, whether it’s experimental ambient, hip-hop, singer-songwriter pop, or a benefit compilation. Read on for our Bandcamp Friday reccs!

Flanafi’s dreamy brand is intoxicating. Every piece of Simon Martinez’s musical project is stylistically congruent, from the soft, layered guitar picking, ambient sounds and hushed vocals to the abstract and organic visual art. The three sweet songs on Haven’t Heard That Voice in Days are the perfect chilly-weather accompaniment, which should help people like me, who are uneasy about the shorter days and harsh winter winds, to snuggle up with a hot cup of tea and find some peace of mind. A bonus of discovering Flanafi’s music on Bandcamp over Spotify: all the song’s lyrics are included, and they read like a sentimental meditation podcast.  – Paige Walter

They’ve been making noise on the Philly punk scene for a few years, but this punchy new EP called CS is The Ire’s first release that’s not a demo or a one-off compilation track. Suffice it to say, it’s a long-awaited release, and captures the driving energy and nervy atmospheres of this goth-leaning four piece impeccably well. On its four tracks we hear wiry instrumental numbers and cathartic hooky vocal songs that dip and dive in minor keys, creating a palpable atmosphere of tension and release. Get to know the band a bit more deeply in this interview with The Key’s Alex Smith, and see them live at Underground Arts next Saturday, November 13th. – John Vettese

Strange Ranger – No Light In Heaven

Strange Ranger couldn’t have strayed further from the lovesick days of songs like “Leona” on their latest release, No Light In Heaven. As the title suggests, the album is far from angelic. The first track, “In Hell” is a deluge of screeching synthesizers and hysterical screams. The album is marked by macabre imagery, distorted vocals, and warped samples. It feels like flipping through the radio stations in purgatory, each track condemned to a different type of suffering. There’s a certain brutality in the shredding guitar solo of “Demolished” and reckless lyrics of “It’s You” that make it clear Strange Ranger has no interest in salvation. – Samantha Sullivan

The Lunar Year – Left of the Dial Live

There’s more to The Lunar Year than just your standard singer-songwriter pop fare. I won’t say “genre-bending,” because what band today is strictly one genre? But The Lunar Year’s combination of art rock, punk, and indie pop is striking, and refreshingly new. Frontperson Katie Hackett loses herself in this impressive collection of live recordings for the Left of the Dial Live sessions — her voice building from a whisper to a scream, and hitting the sweetest parts of her range in the more uncomfortable, tense moments of their songs. Take “Shadows Eat The Sun,” for example. The whole song feels unhinged, both literally in the sense that it devolves into a chaotic instrumental breakdown in the middle, and metaphorically in the way that Hackett slurs her lyrics in the end. The band’s killer rhythm section composed of Erik Kramer on bass and Adam Shumski on drums keep this off-kilter band on track. – P.W.

Various Artists – With Love: A Benefit for the Lilith Fund

We’re happy to see that the 2020 trend of artists using Bandcamp Friday to raise money for good causes is not going away, and on the 25-song With Love collection, a swath of bands from the DIY scene — including Philadelphians Swim Camp, Harmony Woods, and Riverby, as well as NJ’s Hit Like A Girl — contribute tracks to help raise money for the Lilith Fund, a Texas nonprofit that works for reproductive equity. With Texas’ near-total ban on abortion making its way to the Supreme Court this week, the timing of this benefit is more important than ever. (Not Philly-based but related all the same, Sonic Youth released two live sets recorded in Texas to raise money for Fund Texas Choice). – J.V.

22º Halo makes the whole world glow on their latest release, Garden Bed. In the follow-up to their 2019 debut, 22 Degree Halo, it feels like they’ve finally found a light, all of which emanates from one person. Their sugary slowcore sports blushing lyrics like “walking together I stop looking both ways,” and leans into the slightly embarrassing things you do when you’re lovestruck, like buying matching jeans with someone on “Wranglers In Blue.” The whole album feels like when you’re looking at someone you love and are simply awestruck by their existence. Everything suddenly seems to be brighter and better just because you have them in your life. Even the not-so-subtle hiss and fuzz of the recording adds to the luminosity of the album. Emerging from the darkness, Garden Bed is a promise that one day someone will come along and usher in the radiance of dawn. – S.S.

There’s a little bit of everything and a lot to love on This & That Tapes’ second Community Album. The DIY cassette label involved fourteen different artists in this mixtape of original music available now on Bandcamp and as a bundle with a zine via their website. The tracklist is incredibly diverse, but all delightfully lo-fi. Over the course of the entire mix, you’ll hear groovy R&B, country folk, cinematic instrumentals, and all sorts of indie music. There’s nothing else like this available on Bandcamp; you can support fourteen artists and an independent label all at once. – P.W.

Goodhowareyou Records affiliate Rebecca Zimmerman released her latest single earlier this fall, and it’s a pensive acoustic pop song about social anxiety, communication, and connection. “Feed Me” has a great hook and harmonies in the vein of early Tegan & Sara, and is a great introduction to Zimmerman, a voice we’ll be watching in the indie singer-songwriter scene. – J.V.

We were introduced to Philly MC Magnetic The Shaman through Casey Burke, a writer we connected with at Philly Music Fest last month; he’d recently reviewed the Three Treasures EP for the website Grandma Sophia’s Cookies. Magnetic’s rhymes are nimble and contemplative, his beats classic and modern at once, and he follows it up this weekend with “Imposter Syndrome,” a new single set to cinematic strings where he gets in his feelings with introspective thoughts. Over a couple minutes, he shares feelings of self-doubt and self-criticism, delivered through vivid bars like “effective as a molotov thrown at a waterfall” and “wish I had the time for self care and R&R.” Magnetic is just making the song available this weekend, so pick it up before it’s gone. – J.V.

On the heels of her terrific Pleasure / Pain LP from this summer, Wilmington’s Grace Vonderkuhn released this one-off cover: a gritty, minimal indie interpretation of “Goodbye Horses” by Q Lazzarus, aka that song Buffalo Bill dances to in The Silence of the Lambs. It sort of has an Amanda Palmer vibe and straddles an ominous mood with a keen sense of levity. – J.V.

Another terrific community-minded benefit compilation is this absolutely stacked set of songs by The National, covered by Philly regional artists like The Tisburys (“Apartment Story”), Best Bear (“Fake Empire”), and Hootsie (“Abel”). August Greenberg of Riverby co-organized the comp, which is being released through Scottish label Heavenly Creatures to raise money for House of Tulip, “a nonprofit collective creating housing solutions for TGNC people in Louisiana,” as the Bandcamp description explains. “They aim to provide zero-barrier housing to trans and gender nonconforming people in need of a safe place to stay while growing the supply of affordable housing in New Orleans.” – J.V.