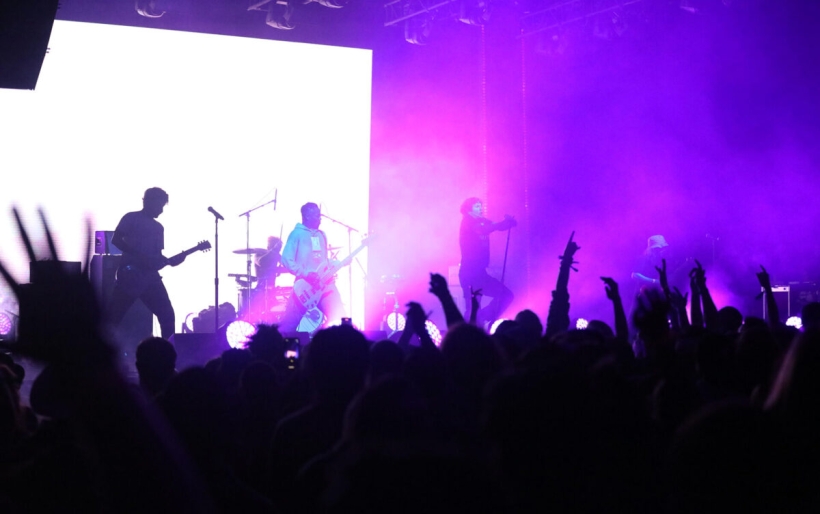 Turnstile at Firefly | photo by John Vettese for WXPN

Baltimore hardcore band Turnstile released its latest album, Glow On, over the summer to widespread praise. After a handful of fall gigs on the festival circuit, the band is going on a huge 2022 tour that stops in Philly on May 24 to play The Fillmore. Six-band lineups can often feel more like an endurance test than a show, but this one is tough to argue with — the band will be joined by midwestern rockers (and frequent Will Yip collaborators) Citizen, doomy bicoastal five-piece Ceremony, New York noisemakers Ekulu, and two great reasons to arrive early: the MC5-channeling Baltimore band Truth Cult (alums of Philly’s lauded Break Free Fest), and the wild card of the show, Atlanta DIY pop duo (and Clairo collaborators) Coco & Clair Clair.

Turnstile’s Glow On is brimming with a fury that is practically begging to boil over. Lead singer Brendan Yates’s jagged screaming on tracks like “BLACKOUT” only adds to the ferocity of the band, which hints at pent-up aggression throughout their songs, then suddenly hits you full force. As they zip through pensive guitar riffs and Daniel Fang slams on the drums, it’s clear that there’s more than just senseless anger behind their blistering punk. Throughout the album, there are experimental moments that catch you off guard — like the shimmering samples on “UNDERWATER BOI” — and overall they flash their musical chops in such a way that the record takes on a sense of calculated chaos.

Tickets for the whole tour go on sale this Friday, November 19th, at 10 a.m. — more information can be found at the XPN Concert Calendar. In the meantime, you can listen to Glow On below.